Austin's like a box of chocolates-ya never know what you're gonna get. My wife and I attended a wedding last Saturday in Austin and stayed at the Hilton on 4th St for an outstanding price, thanks to our running buddies for the event, one of my sons-in-law's parents. They are Priceline masters. After arriving back at said hotel after the wedding fest, our compadres wanted to walk over to 6th St and visit an Irish pub that they enjoy. As we approached BD Riley's, some substantially played blues riffs met us on the sidewalk. To say that that was sort of right up my alley for a great way to top off an wedding evening would be more than correct. Must have stepped on a four leaf clover on the way over.


Lady Luck or Leprechaun continued smiling (or laughing) as a empty table greeted us right inside the door, stage left of the bandstand. Just the bass player and the drummer occupied the stage, but blues/rock licks were being ripped somewhere by a strolling minstrel within the dark recesses of that club. I kept looking to see who was laying down such tasty stuff and spotted his back, holding court directly in front of a nice looking blond, reeling off one rapid fire blues note after another. He returned to that same scene frequently, which led me to believe that she was his Valentine's, or relative, or someone who donated substantially to his tip jar. At this point, I had my suspicions as to who the perpertrator may be and a chat with the door man confirmed that it was Alan Haynes playing through one of Stevie Ray Vaughan's Strats. I let my wife and companions know that we were being treated to a performance by one of the best in the business. 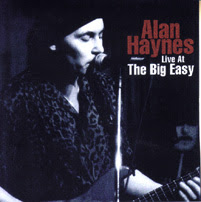 Now, I'd never heard Alan Haynes doing his thang live. I've got a couple of his CDs, a 'live' one with Jim Suhler and his Wishing Well, but seeing him live was definitely eye opening. My phone is not one of the smart ones and takes very poor photos without tons of light, so I stuck a shot of his Live at The Big Easy up here on the blog--it's one that I've wanted, but it hasn't been available for awhile. We walked into the club at quarter of 11 and left at 1:15 and Haynes played without nary a break. The man possessed a bottomless well of ideas that he applied to his fretboard as he wandered the pub, touching on Hendrix, SRV, Winter and, of course, Haynes. He visited our table and popped our eyes and ears with fingers that defied us to keep up with the direction that might they might head next. Every now and then, he returned to the stage to remind everyone that he could sing the blues very well as well. Most of the time, though, he prowled like a Stat packin' panther. A good friend of mine, and aquaintance of Hayne's, told me that this is his 6th mode--an attempt to keep the bar hoppers seated. Pretty effectual mode, I think. His Valentine's went nowhere. After a return from the men's room, I stopped by her bar stool to watch Haynes employ a shot glass for his slide tool and then swap it for a beer bottle, until he needed a swig. Same friend had been telling me for awhile that I needed to get by The Big Easy in Houston and catch Alan Haynes. My loss. I used to frequent places like Club Hey Hey, The Bon Ton Room, Fitzgerald's, Rockefeller's and Billy Blues to catch string slingers such as Jimmy Thackery, Lonnie Mack, Tinsley Ellis, The Arc Angels' pair, Anson Funderburgh, Little Charlie, Roy Rogers, etc...So, I can definitely say that Alan Haynes belongs on the world stage of six string, blues/rock guitar heroes. The man does know how it's done in Texas.
Don't take my word for it. Catch him when you can. He frequently plays The Big Easy and the BD Riley doorman told me that he a regular attraction there also. In the meantime, head to http://www.alan-haynes.com/ and read about what I've left out. 'Nuff for now.
Posted by Ricky Bush at 2:52 PM No comments: 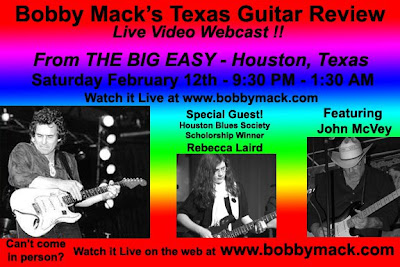 Hey, this it the next best thing to soakin' up the atmosphere at The Big Easy and watching a Texas blues guitar legend bend them strings and sing the blues a good as anyone out there. Always a hoot watching these live streams unfold on stage...almost as good as being there (if you can't be there). For anyone who hasn't witnessed a Bobby Mack performance, this is a must do. When he and John McVey get wound up, there ain't no telling what's going to happen. I haven't seen Rebecca Laird, but word is that she's gained a ton of respect within the Houston blues community and that she'll certainly bring it.
Posted by Ricky Bush at 11:16 AM No comments:

Need a road trip play list of blues harp instrumentals? These are some that I think are just peachy keen.

1. Varmint--from the mouth of Gary Primich and from one of his best albums, Company Man. Might just be my favorite. He rips it open.
2. Marion's Mood--Rick Estrin gets way down and greazy on this tune from Kid Ramos' Greasy Kid's Stuff.
3. Blues In A Dream--from Jerry Portnoy's Home Run Hitter. A kissin' cousin to the Estrin tune in setting a mood to lay you back and groove on the scenery. Let someone else drive. Not enough Portnoy out there and this is a good 'un.
4. Rocker--Little Walter...'nuff said. Of course, I could fill a play list of his exquisite instrumentals.
5. South Bay Beat Down--Gary Smith is just a tone monkey deluxe and this one has him hangin' it all out there from his danged good Blues For Mr. B.
6. Extra Napkins--Icepick James Harman is such a witty blues lyricsmith, but he puts down some of my favorite harp chops too. Can't beat this from the album of the same name.
7. West Coast Flood--Mark Hummel's gettin' down with just an ol' back down-in-the-alley blues from Low Down from Uptown.
8. Cleo's Mood--Kim Wilson owns this tune from Barrelhouse Chuck's Got My Eyes On You. Sweet.
9. Runnin' Off At The Mouth--love the title to this Mitch Kasmar jumpin' jivin' rave up from Nickels and Dimes.
10. Homan and Dowling--Sonny Boy Terry exudes the groove in regards to what this intersection in Houston's Third Ward is all about with the fabulous Joe 'Guitar' Hughes slinging it with him. Stone cold twelve bar blues you can use from Breakfast Dance.

Instrumentals can be a tiring lot sometimes, but these are a well played lot by some of the best in the business and far from tiresome. There's plenty more where these came from, but I just happened to have these in iPod rotation and thought I share the list.
Posted by Ricky Bush at 3:13 PM No comments: