For The Harp Players In Us 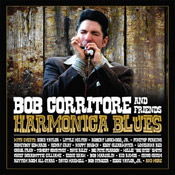 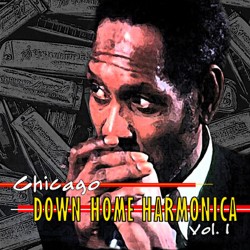 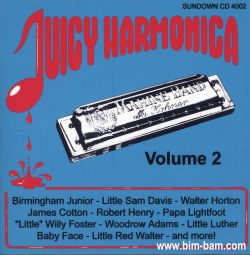 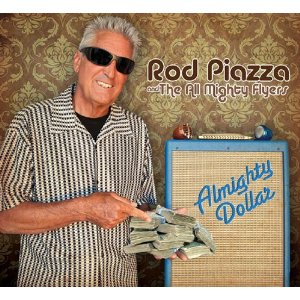 ﻿Here's a few goodies beginning from the top with Bob Corritore's Harmonica Blues. Blogger has made it a PITA (for me anyway) to get pictures to format where I'd like them to land, so I'm making do with where they ended up. Corritore's release has been out on Delta Groove Productions since last year and features him backing a slew of heavyweights at his famous Rhythm Room club in Phoenix. Feature tunes from Little Milton, Louisiana Red, Koko Taylor, Robert Lockwood Jr., Pinetop Perkins and many more.
Chicago Downhome Harmonica Vol. 1 features a great collection from a variety of Chi-town blowers from back in the day. Big Walter, Little Walter, Big John Wrencher, Little Mack Simmons, Little Sonny, and several others display their talents at blowing the nasty ol' blues the way it's supposed to be be blown, either in support of other Chicago stalwarts like John Brim or showcasing their own stuff.
Ditto for Juicy Harmonica Vol. 2, except the range is not Chi-town centric. Big and Little Walter are present (mainly in supporting roles, which sometimes represents them at their best), along with a couple of nice '60s era James Cotton, and some folks you may not know as well, such as Birmingham Junior, Little Willie Foster, Papa Lightfoot, Little Sam Davis, and others.
Last, but certainly not least is a June release from one of the current bosses of the blues, Rod Piazza and his Mighty Flyers. Delta Groove Productions has scheduled a release of Almighty Dollar on 6/21/11, so I haven't much of a clue as to what to say about it. Well, that's wrong. I do have a clue. This is Piazza, and he rarely puts out anything that doesn't represent the best of what bluesharp blues is all about.
That's it. Just wanted to share what I think will turn your crank if your looking for something to satisfy your bluesharp habit. The two collections can be had at http://www.bluebeatmusic.com/
Posted by Ricky Bush at 1:37 PM 2 comments:


I don't post very many videos, but I heard these guys playing this on the radio on B.B. King's Bluesville satellite radio and just had to share it here. Of course, it was the harpman who caught my ear on this tune that Lester Butler's Red Devils put on my desert island list. Turns out that it's Tex Nakamura, who took over Lee Oskar's harp chair in War, blowing the reeds out of his instrument. The lead singer/guitarist, Johnny Main, and the upright bass player, Mike Turturro, both played in Lynwood Slim's band, so they know a bit about supporting what a harmonica does best. Not going to bore anyone with a lot of details here, when you can travel over to http://www.the44sband.com/ and catch up with these guys. The site has several more vids showcasing just how good these SoCal guys are. They have a Kid Ramos produce release called, Boogie Disease, which I'll try to procure as soon as possible and leave more of my impressions behind in a subsequent post. 'Nuff for now.
Posted by Ricky Bush at 12:35 PM No comments:

My Cup of Tea

He's done it again. Larry Skoller has put out another superb album of unadulterated Chicago Blues on Raisin' Music record. He repeats the magic laid down by Chicago Blues: A Living History-The (R)evolution continues. The man and this band can absolutely read my mind (and soul) when it comes to my taste in blues music. I've included the official press release (it won't come out until June) to kick things off, because it pretty much tells it like it is. I've included some of my thoughts at the end of this post. Actually, you don't have to read my thoughts, just put it on your wish list if you love this type of blues. I reviewed the previous releases by this aggregation of superb musicians and a search of the archives may turn those up for y'all. 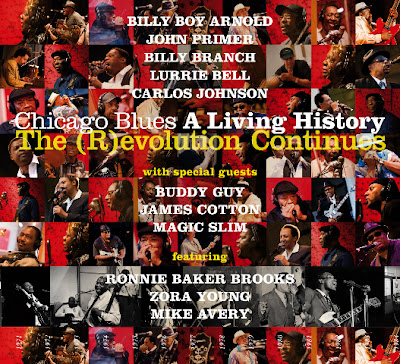 Produced by Raisin' Music's Larry Skoller and recorded by Blaise Barton at Chicago's JoyRide Studios, Chicago Blues: A Living History; The (R)evolution Continues covers the early piano-driven Chicago Blues of the 1940s through to the classic electric-guitar-and-harmonica-driven period of the 1950s. This period laid the foundation for the British Invasion and continues to inform rock and pop music as we know it today.

Chicago Blues: A Living History is already recognized as the greatest tribute of our time to the Chicago Blues. With this new release, the group solidifies their place in the history of the music and builds on the tribute and its goal to keep the blues alive and well. #######

Okay, first off, a pre-release digital download was kindly sent my way by August Forte. I took it and tranferred it to disc and listened to it for the first time driving down the highway. Like an iTunes download, I have no reference yet as to who's doing what, but have strong assumptions. I do know that when "Rocket 88" began blasting, my thought was "Wow. Someone is nailing James Cotton's harp licks, timbre, and tone wonderfully well." Reading the press release after I returned home explained why. James Cotton IS playing the harp on one of his many blues hits. Same thing happened when I heard the guitar and opening vocals to "First Time I Met The Blues" and knew that it had to definitely Buddy Guy-and it was. He and Cotton, along with Magic Slim, Ronnie Baker Brooks, Mike Avery, and Zora Young, are all guests of the host group of Lurrie Bell, Billy Boy Arnold, John Primer, and Carlos Johnson.

And that's the problem with assuming who's singing or playing, but it matters not in the least unless your trying to pass this information on to someone else. Which is sort of what I'm doing, but since I know that Muddy Waters resides in heaven, I do have a pretty good idea that it ain't him singing and playing slide on "Canary Bird", but I do not that John Primer can channel the master's vocals and unmistakeable slide style at will. The press release confirmed this, also. I'll go out on a limb and take an educated guess that it's he doing the same with Jimmy Rogers' "Chicago Bound", and also guess at Billy Branch doing Little Walter's part extremely well.

Since the press release does clue me into Billy Boy Arnold doing the double entrendre "Jelly Roll Baker" and wailing on acoustic harp. I do know Billy Boy's affinity for his ol' mentor Sonny Boy Williamson I's style (he put out a tribute album recently), so I'll tab him for doing the same thing on "She Don't Love Me Like That". I'll put "Got To Leave Chi-town" and the first position harp featured in "Stockyard Blues" on Billy Branch. I have no idea who plays the esquisite piano, though, and won't guess. Whoever it is, knows his book of Otis Spann. My guess is Branch doing the harp meltdowns on "Mellow Down Easy" which seques into "Bo Diddly". Then again, it could be Billy Boy or even Larry Skoller's kinfok, Matthew (who toured with this band).

The guitar playing is outstanding throughout this disc and find it problematic to try to pin down who is bending the strings. Buddy Guy was obvious and I know that Carlos Johnson likes to up the ante with some slingin himself, so Otis Rush's "Ain't Enough Coming In" could possibly be him. I do have a copy of Lonnie Brooks doing "Don't Take Advantage of Me", so my guess is that his son, Ronnie, is kickin' it on the album here. Well, I'd better stop this assuming. You know what they say about people who assume-makes an "ass" out of "u" and "me". So, just get this release and read the extensive liner notes and find out correctly who is credited with what. That's what I'm gonna do. Don't pass this one by. 'Nuff said.

Go to http://www.chicagobluesalivinghistory.com/ for a more complete story, especially after May 10 when they'll put up an updated website.
Posted by Ricky Bush at 11:28 AM No comments: