Just finished up the review of the galley proofs of The Devil's Blues in order to catch the last bits and pieces of any stray typos remaining. Thankfully, there were very few. This also means that publication of the second round of adventures of those crime fighting bluesmen, Mitty and Pete, is soon to follow.

My Barking Rain Press editor, Ti Locke, came up with the idea to include a playlist of youtube vids of all the music that Mitty and Pete play or mention in the book. She tracked down these versions and they'll be clickable in the eBook format. Cool idea. Here's the playlist that can be checked out now. The numbers indicate the chapters in which the songs appear.


Ricky Bush has provided this chapter-by-chapter playlist to go along with reading The Devil's Blues. Just click on each song title to hear the song at YouTube.

Early in the Morning ('bout the Break of Day)

Bring it on Home

A Change is Gonna Come

I Shall be Released

Santa’s Messin’ With The Kid

Spirit in the Sky

Sympathy for the Devil

Too Much Is Not Enough 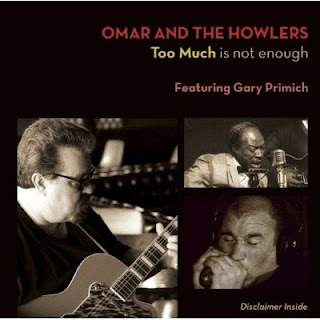 Let me begin by saying that I lied in my last post. Not about finally getting around to reviewing something to do with the blues, but about the ones that I said were up next for me to waxed poetically about. I put a Christmas Amazon gift card to good use and received this release yesterday and just had to put my spin on it.

This represents Omar Kent Dykes second release paying homage to Jimmy Reed's music. I have the first one, with Jimmy Vaughn on board, called The Jimmy Reed Highway. It's a good 'un, but I bought this one here because of the Disclaimer that Dykes wrote explaining why he would do another batch of Jimmy Reed stuff. The title, Too Much Is Not Enough, explains some of his reasoning, but what sold me was this: "The most important reason to release these songs: they are the last recordings I did with my good friend, Gary Primich. I believe these songs deserve to be shared and appreciated. I am dedicating this CD to the memory and unstoppable talent of Gary Primich." 'Nuff said!

Once I decided that I'd learn the ins and outs of playing the blues harp, Gary Primich was the first professional that I met and witnessed in action way back in the day. I've documented that show somewhere here on the blog, but the bottom line is that he blew me away and I became a fervent fan of his. He passed away way too soon, but left a legacy of the high caliber harmonica recordings behind. I'm beholding to Omar Dykes for sharing these cuts with me.

Primich kicks off the proceedings on the opening cut with his fabulous deep, fat backed amplified tone and weaves all his tricks of the trade into the fills and solo. Too Much is not a Jimmy Reed staple, but takes the same shuffle path as the master. Same thing with the Dykes penned, I Gotta Let You Go, which is stamped with the signature groove. On this one though, Primich lays down his mic and shows off his unbeatable acoustic chops and enviable talent at bending the reeds to produce impeccable tone. Gary Clark Jr., the fast rising star from the Austin music scene, adds some nice slide guitar into the mix. He pops in and out of the core group of veteran blues cats Derek O'Brien (guitar), Ronnie James (upright bass), and Jay Moeller (drums). Barry Bihm throws down on electric bass when they want to get particularly nasty and Jon Hahn takes the drum sticks on a few.

Matter of fact, the only two cuts without Primich's harp (I Ain't Got You/I'm Gonna Ruin You) are from a stripped down trio with Clark doubling on harp and Moeller's drum kicking. His harp playing is effective, but rudimentary, and I suspect may have been included to contrast just how much more powerful Primich is on the instrument.

That Primich power is on full display on Shame, Shame, Shame on which Dykes turns him loose to do his thang. It is high octane stuff with Primich pulling out all the stops with his signature amped up runs, bends, and octave blasts. Same for You Don't Have To Go which Dykes transforms into a driving, whomping Chi-Town shuffle with Clark doing a bit of Elmore James style of slipping and sliding on the guitar frets. High and Lonesome also represents Primich's knack for getting the the deep, gutbucket grooves slamming with exquisite long drawn lonesome tones being pulled from the reeds and demonstrating his mastery of working the mic cupped and uncupped to add tonal variety.

Primich absolute owns Take Out Some Insurance, not exactly with any solos thrown down, but just proving how he can power a rhythmic groove. He helps it shuffle into the ozone, and on the instrumental Roll In Rhumba, he shifts gears to keep the rhumbaling rhumbaling.

Of course, Jimmy Reed's harp work is synonymous with what can be done in first position and the high end of the harmonica. No one, and I mean no one, nails that style better than Gary Primich. The bends, trills, warbles that he produces on those tiny reeds are nothing short of remarkable, and then he'll majectically swoop down for some low end acoustic thump on such tunes as Going To New York and I'm Going To Move To The Outskirts Of Town (again, not a tune associated with Reed).

Keep in mind that Primich is working as a sideman here and nothing is intended as a showcase for his talents. The songs are all less than four minutes long, some less than three, as should be, so he's just adding his licks to provide the songs with what is needed. Someone who is not a blues harp nut might not even notice, but we know what he's putting down.

I'm not meaning to give short shrift to Dykes. I saw beau coup Omar and the Howlers gigs back in the day and always loved his roadhouse rowdiness and his rough and ready vocals, and the man plays a helluva guitar. He knows exactly what he wants and how to get that across in any songs that he tackles, and here, he's tackled the Jimmy Reed grooves and wrestled them to the ground with a cracker jack group of musicians for an outstanding release. Damn right, Omar, Too Much Is Not Enough. And as he says in his liner notes, "If you think I've gone overboard with Jimmy Reed, just wait until I release my Howlin' Wolf and Bo Diddley material". Bring it on Omar Dykes. 'Nuff for now!