The Magic of Sam 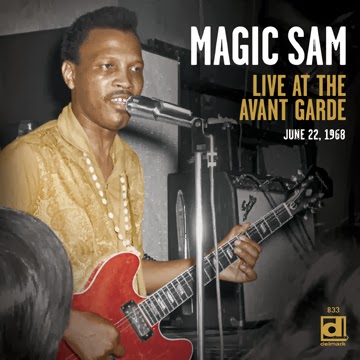 Along with Otis Rush, Bobby Bland, B.B. King, and Elmore James, Magic Sam ranks as one of my all time favorite blues singers. Very few have ever come close to matching the emotional intensity that burst from the man. The same can be said about his innovative guitar playing.

Story goes that Samuel Gene Maghett's last name sounded so close to the word "magic" that his bass player tabbed him with the moniker, Magic Sam. I'm sure that ol' Mack took into account the magic that he coaxed from the six strings of his guitar. His late '50s singles for the Cobra label, along with those by his stable mates Otis Rush and Buddy Guy and also Freddy King, ended up being coined Chicago's West Side blues style. Not sure where the term originated, but someone apparently felt the need to distinguish the style, prominently featuring the electric guitar in more of a solo role, as being different than what Muddy Waters and Howling Wolf were laying down. Buddy Guy will tell you that there was no such thing as a blues style indigenous to that side of Chicago, that they played their blues all over the city. I'm assuming that the name was in play before Delmark signed Sam and released the perennial desert island album, West Side Soul. If not, then the label certainly perpetrated the use of the term.

By the time Magic Sam recorded for Delmark in 1967 he had been playing the blues clubs in Chicago from the first time he set foot in the city at the age of nineteen in 1950. His tremolo laden guitar and his esteemed vocals, dripping with vibrato, were caught on record by Cobra between 1957-59. His tunes "All Your Love" and "Easy Baby" captured exactly what set his style apart from those around him, with heavy chords augmenting the sharp, single picked notes from his axe. In other words, playing rhythm guitar while slinging notes. And, much like Otis Rush from that same period, his vocals proved to be as much of an instrument in the blues as his guitar, as every word dripped with emotion and cried out deep feeling.

Anyway, he died way too young of a heart attack at 32. West Side Soul and the follow up, Black Magic, were all he left us with in terms of studio albums. His Cobra and Chief recordings are available. After his death, live recordings surfaced with examples of his genius, and were indeed magic. My personal favorite has always been Live at the Ann Arbor Blues Festival from 1969. After showing up with his bass player and borrowing a guitar, he lit the audience up with his guitar work and superb vocals. After the appearance, his reputation spread way beyond the club scene. His live album from the Alex Club is great too, but doesn't come close to the raw abandon that he unleashed on the Ann Arbor. It did provide a excellent snapshot of Sam working in his home environment. The only drawback to both is that the quality of the recordings leave a bit to be desired, but neither diminishes the quality of the musicianship on display. I have both these albums on vinyl, but I think that Delmark has package them both for CD. They also released a recording of Sam playing at home some years back.

Fast forward a few decades later, Delmark has release a set that was recorded in 1968 at a folkie type club in Milwaukee. My friends, this recording languished way too long in the hands of Jim Charne, who caught the magic of Magic that night, and not to have been shared with the rest of us. Damn worth waiting for, though. From the opening notes of Freddy King's instrumental, "San-Ho-Zay", to the ending, trendy 'Hully Gully Twist', this recording captures what Magic Sam was all about in his element, ripping it up in a club. The difference between here and the Alex Club is that his audience is mostly a white one. Aurally, it is the best live representation of what his audiences enjoyed. It's all here. Tune into any cut and be amazed by the talent of the man. The vibrato in his voice on Lowell Fulson's "It's All Your Fault" is other-worldly and few can match the heartbreak that those vocals elicit. It's also a great example of his interpretation of the blues penned by others. He owns the songs here written by the aforementioned Freddy King and Fulson, along with Junior Wells' 'Come On In This House", Willie Dixon's "Hoochie Coochie Man", Muddy Waters' "Still A Fool", Otis Rush's "All You Love (I Miss Loving)", Jimmy Rogers' "That's All Right", and Jimmy McCracklin's "Everynight Everyday". That's quite a feat, given that these songs were so associated with their composers. They were far from being old warhorse blues tunes back in 1968, though.

Of course, having released West Side Soul the year before, he thrilled the club goers with his own material. "You Belong To Me" can't be beat for an example of his rhythm guitar workout while he sings his lungs out. The set includes one of my favorite slow blues by the man. If anyone really wants to know what the blues is all about just point them to "Bad Luck Blues". Stone cold blues dripping with high pitched, tortured vocals and exquisite guitar riffs. Both of Magic Sam's studio releases offered up servings of Soul and Rhythm and Blues. His jaunty, jumping "That's All I Need" is a prime example of his talents in regards to those sub-genres. He kicks off the instrumental "Hully Gully Twist" with some Elmore James' inspired riffing before rocking the house like Chuck Berry.

Live at the Avant Garde instantly joins West Side Soul on my desert island list. Yes, it is not a professionally recorded live recording, but the sound quality is head and shoulders above what came before it. Every blues fan needs to have this one in their library. For those unfamiliar with this blues master, this is as good a place as any to experience the genius of the bluesman. Heck, I bought three discs as Christmas presents just to share the Magic.  'Nuff for now.