Another Blues For Food Helping

This year's line up of talent Houston blues acts is second to none. The music kicks off with the Mighty Orq doing an acoustic set followed by the Texas Blues Gentleman himself from Bellville, Don Kesee and the Bluesmasters featuring Pops Stewart and Pee Wee Stevens.  By 3PM some chick power rolls in from Austin with the stellar Erin James Band. After that the true to life gulf coast legend, Galveston's Bert Wills along with Clint Boyd join the fun. Houston favorite The Tony Vega Band then takes the stage followed by two working front men in the same band Rich Delgrosso and John Del Toro Richardson change things up with superb blues mandolin and some very tasty lead guitar. Blues For Food producer organizer Sonny Boy Terry and his band serve up an offering of spicy  harmonica deeply rooted in Houston blues history.  Headlining this year's Blues For Food is two artists who don't do things like this often, former BB King bandleader Milton Hopkins and the delicious vocals of Jewel Brown. Keeping the ball rolling and into the evening is party favorites Mojofromopolis, rising star Annika Chambers and the House Rules Band will surely try and take house then on to Texas Blues/Rock guitar god John McVey and the Stumble. Topping the evening is the man voted Houston's best bass player Spare Time Murray and the Honeymakers featuring Little Screamin' Kenny hosting his weekly "World's Famous Blues Jam". This is over 12 hours of a diverse array of non stop Texas blues we hope represents the seen well. All musicians are donating their time for this good cause and Houston blues tradition.

Those who attend and donate receive a free plate of BBQ. There will be raffles, a silent auction, and lots of surprises. For those who cannot attend, you can use KPFT studios as a drop off point for any food items. There will be a Houston Food Bank truck on site at Shakespeare Pub the day of the show with volunteers to load your food.

This is a great charity but we need the Houston media's support too. Social networking, KPFT, the blogosphere and the Houston Blues Society help tremendously and we are truly grateful but without mainstream media support from the local we are often "preaching to the choir".

Blues For Food is by all accounts the "mother of all benefits" on the Houston blues scene - a true model showing how much good we can do at a grass roots level. it was started in 1991 by blues singer and KPFT deejay Big Roger Collins and has continued for 23 years now serving as a precursor to the development of the Houston Blues Society. Many on the Houston scene consider Blues For Food the best party of the year. The amount of cash and food donations accumulated through the years is remarkable. All the bands bring their A game with each act performing a tight set approximately 30 minutes long. There is hardly any lag throughout the day. it is truly a huge celebration with overflow crowds in the parking lot enjoying the music, the vibe and great BBQ. So please give us the print. We humbly feel it is well deserved.

So please share and help get the word out. Let's make this year's Blues For Food the biggest and best one yet. Again, music kicks off at 1PM and goes until 1:30AM. Admission is any non perishable food items or cash. Shakespeare Pub is located at 14129 Memorial Drive at Kirkwood just west of Beltway 8 off  Interstate 10. Please call 713.822.0437 for more information. You may also visitwww.shalespearepub.net for more information.

You just ain't gonna find a better blues show than this one, or one for a better cause. 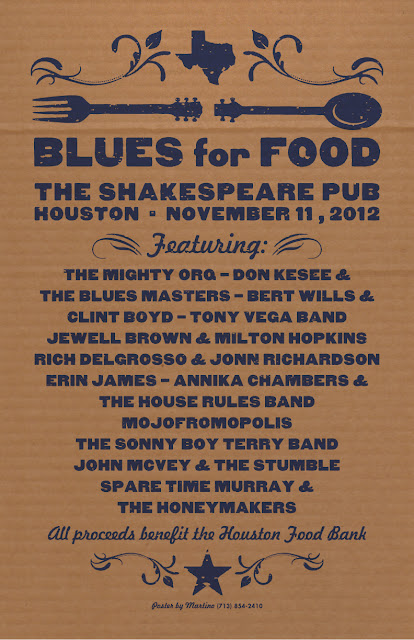