Finland Has The Blues

I've got a new friend in Jouni Hyytiainen from Finland. He contacted me wanting to read and write reviews for their blues magazine, Blues News http://bluesnews.fi/index_eng.thm He scanned this jpg for me. Pretty cool. 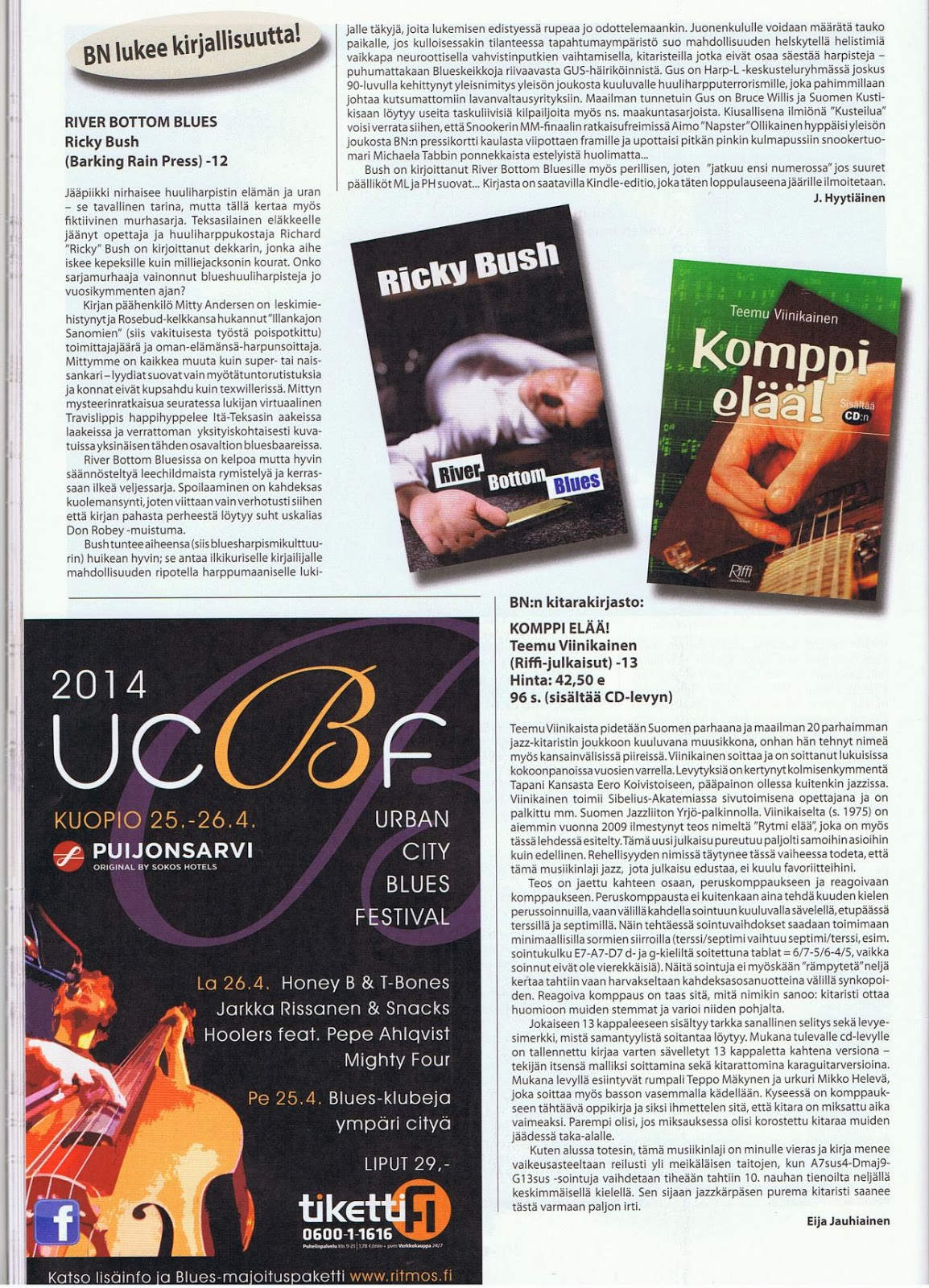 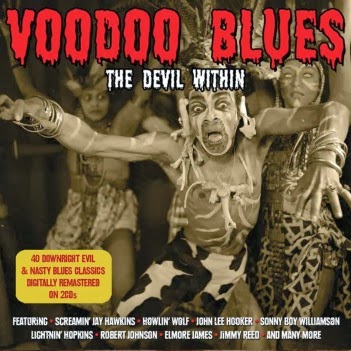 Back in the day, before I had amassed a substantial blues collection, I had a penchant to buy compilations of the blues. Mostly, from reputable reissue labels like Yazoo and Document for the pre-war stuff and Rhino and later the artists from the Columbia label issued by Sony just to get a taste from blues artists that weren't yet in my collection. Prior to that, though, I'd fall for the cheap cassettes on display at convenient stores. Most of them were a hodge podge thrown together with questionable quality. Every now and then I hit on a gem of recordings from the vaults of Jewel or Excello. Blues racks in chain record stores (lots of those have disappeared, along with shelves of blues recordings) always had examples in the various artists slots that screamed "Essential" or "Definitive" collections. Some of these also were excellent, but most fell into the convenient store category with no liner notes or misspelling of the artists names, or attributing a cut to a blues man that was actually sung by someone else.

I quit buying these long ago, since I had recordings by those artists represented on the compilations and I had many well produced "Best Of" or the "Complete" recordings by them from reputable sources. Well meaning friends and family, looking for some sort of gift for me, have from time to time given me compilation CDs over the course of time. Some are great and some fit the other category, but in most cases they contain songs that I've heard many times over.

Around my birthday last year, I received several such gifts. One was an "Essential" disc of blues "In the Beginning" that was alright, but chocked full of the old warhorses that really didn't peak my interest. Then there was this one that was a pleasant surprise. The cover looked pretty cheesy and the title "Voodoo Blues The Devil Within" seemed just as suspect. The music proved other wise.

The disc caught my daughter's eye as she was looking for Halloween costumes for her kids. Don't recall where, but since it had a spooky theme, it was on display for the occasion. The music on the disc all has something to do with the devil or voodoo or hoodoo. The liner notes explain the compiler's reasoning for the selection and the dates and composers are listed, so that is a plus. It is a two disc collection of forty songs, so I certainly will not touch on all of them. With the handful of old chestnuts, it contain blues that I hadn't heard before. I will start, though, by mentioning the songs with blues harp represented.

There are of course, the ones that have been in my house for a long time. Howlin' Wolf's "Evil (Is Going On)" and "I Asked For Water (She Gave Me Gasoline)", Sonny Boy Williamson I's "I Been Dealing With The Devil" and "Hoodoo Hoodoo" (made more famous by Junior Wells), Sonny Boy Williamson II's "Your Funeral and My Trial", and Jimmy Reed's "I Know It's A Sin" are those that I've listened to many times. The value is in those that I'm not familiar with hearing. Or, at least, I don't recall them. I've heard John Lee Hooker's "Burnin' Hell", but not this version containing an insistent, well played harmonica riff. I'm only assuming that it is Eddie Kirkland. I'm just not sure that he was on board for this 1949 session. If not, then I don't know who blew the blues on this one. I didn't waste a ton time researching any of these cuts, and it doesn't really matter because the music speaks for itself.

Same with Otis Spann's 1954 "I'd Rather Be The Devil". Not only is he backed by a good harp man, but with some mighty fine single picked guitar notes wailing throughout the song. Yeah, I know Muddy Waters' band backed him on plenty of songs, but I don't believe this is the case hear. I did find information listing B.B. King and Jody Williams as guitarist on "Must Have Been The Devil", which surprised me. A 1954 version of that song is included here, but the strange thing is that it only has Spann's piano. I'll go out on a limb and say that my internet source confuses the two songs and maybe  Walter Horton wails on the harp. Just a guess, though.

I can't recall hearing Robert Cooksey before, but he plays some rapid, clean harp notes on "Black Cat Bone" along with the singing and guitar playing by Bobby Leecan, who this song is attributed to on this 1927 recording. Never really knew the source of this often recorded blues tune.

I've never invested in much in the way of piano blues music, but it's my loss that I haven't bought any of Champion Jack Dupree's stuff. Great musician's (especially the sax player) back him on "Evil Woman", "Bad Blood" and "Nasty Blues". Never paid much attention to Screamin' Jay Hawkins, either, writing him off as not my cup of tea, and yeah, he's sorta hokey, but the musicians he employs are top notch. His "I Put A Spell On You" kicks off the disc and I've heard it plenty of times over the years, but it works great on this compilation. Actually, it is the only song that I've ever listened to by the strange fellow, but "Little Demon" proves that he was more than a one trick pony.

I'm sure I've got recordings that Washboard Sam has played on, too, but I've never heard "She Belongs To The Devil". This 1941 tune is dang fine blues playing. Other's that are just as fine, and just as unfamiliar to me are by the gals Memphis Minnie, Bessie Smith, and Ma Rainey.

The sophisticated blues by T-Bone Walker is represented by "Evil Hearted Woman" and "Street Walking Woman". He'll always be one of my favorites, so it's nice that these songs are worked into the mix. In the same vein, Louis Jordan, jumps and jives on "Someone Done Hoodooed The Hoodoo Man", which invites comparison to Sonny Boy Williamson I's version on the same theme. Both were recorded in 1940.

Of course, you can't have music about the devil without including, Robert Johnson, who made a career out of running from hellhounds, so his "Me and The Devil" and "Preaching Blues (Up Jumped The Devil) are included here. Same can be said for Skip James' "Devil Got My Woman".

Another one of my all time favorites is Elmore James and he's represented here with "Sinful Woman". For those unfamiliar with anything other that his superb slide guitar this one shows that he could dang well pick out some mighty fine single notes.

Okay, I'm done. Just had to mention that this is a fine compilation, especially to cue up during the Halloween season. I did seek out information on Not Now Music. They are a UK company (no surprise there, those Euros put out some fine reissues) and produce tons of compilations and reissue albums, not only by blues artists, but rockabilly, jazz, rock n roll, etc...There website contains lots of stuff that can probably not be found easily elsewhere. Just don't know how cheap it would be to order and ship from there. 'Nuff for now.
Posted by Ricky Bush at 12:48 PM 1 comment: