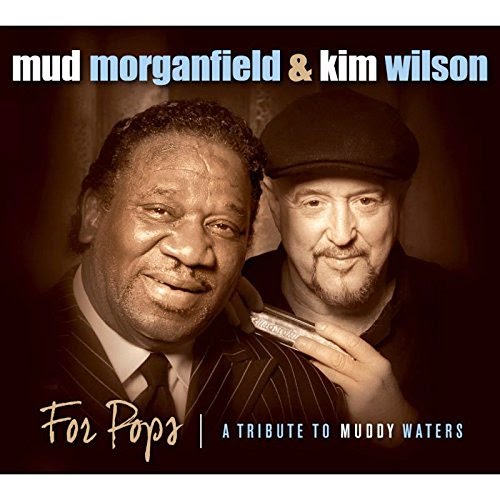 Have to admit that I haven't listened to much of what Muddy Waters' son, Larry "Mud" Morganfield has recorded. I do know that his previous outing on Severn Records, Son of the Seventh Son, garnered nice reviews within the blues community, but I never got around to picking up a copy. I'll also have to admit that I picked this one up because it had Kim Wilson's photo on the cover alongside of Mud's and Wilson's name has equal billing. In the liner notes of For Pops/A Tribute To Muddy Waters, Severn Records' David Earl says that he finally gave into the idea of producing a set of Muddy's music for his son to cover. He ran it by Mud and Wilson and they were off to the races. They chose to lay off a greatest hits program and decided to mix in the lesser known with the better known.

Now, I'm not sure that I would have sprung for another Muddy Waters tribute album, but I felt this one would be of a different color, plus I'm always a sucker for Mr. Wilson's sideman adventures, especially when it comes to Chi-town blues. I'll get this out to the way first: Mud sounds damn close to his old man. He's got the master's vocal nuances and inflections down and if I'd walked into a room while it was playing, he dang sure would have fooled me. Eerily close. Of course, Kim Wilson played Muddy's music with Muddy during the hey days of the legendary Antones blues club. So, to say that he knows his book of Chicago style blues is an vast understatement and I don't think I need to go through a play by play of all the techniques that he employs to get this point across. Little Walter established the harmonica as the lead instrument in Muddy's band and Wilson certainly leads the way throughout the fourteen songs here. Reminds me of the work he did on Jimmy Rogers' Ludella (which, by the way, was on Antone's label) and more lately Barrelhouse Chuck's Got My Eye On You (my favorite latter day recording of Chi-town covers). Some of these songs originally employed the harmonica chops of Junior Wells, Big Walter, and James Cotton as well as Little Walter. A few of the songs have been debated as to who blew the harp or who didn't, because they all could cook in that Little Walter vibe, as does Wilson. No one slips and melts into this genre as well as Kim Wilson.

Speaking of Barrelhouse Chuck, he's along for the ride on piano, as are veterans Billy Flynn (guitar), Rusty Zinn (guitar), Steve Gomes (bass), and Robb Stupka (drums). It didn't take much explaining what was needed in the studio to this crew, and I'd say that's the major reason it only took four days in the studio to crank these tunes out. These guys blend into that classic Chi-town ensemble groove with ease. Barrelhouse Chuck bangs, sprinkles and tinkles the piano notes in and out of the proceedings in the style laid down by Otis Spann and later by Pinetop Perkins. His work highlights every song remarkably well.  I'd say that casual fans of Muddy (although, I don't know how anyone could be a casual fan), "Blow Wind Blow", "She Move Me", and "Still A Fool" would be most recognizable because they come from what I'd considered the pre-1955 classic period, followed by "Nineteen Years Old", "I Want You To Love Me", and "I Live The Life I Love". "My Dog Can't Bark" came along in 1965, which was bit beyond Muddy's commercial peak and a lot of folks may remember "Gone On Main Street" from the Woodstock album with Paul Butterfield on harp and not the version with Junior Wells. "I Don't Know Why" and "She's Got It" are a couple that I never listened to enough to remember that they were in Muddy's catalogue. Of course, there will be plenty of neophytes that'll associate "Trouble No More" with the Allman Brothers without realizing that Muddy recorded it '55. Most every song on the program has been covered by others since Muddy's band hit the big time up through today, but the guys did a great job of limiting the number of over-covered chestnuts. I'll lean towards "She Moves Me" as being a favorite cut, simply because it's one of my favorite Muddy songs. Little Walter's tone and technique moved me then and Wilson's moves me on this release. There's no credit as to which guitarist nails Muddy's one of a kind slide tone, but they wound it up pretty darn good.

Yep. This is one sweet tribute that works. Larry "Mud" Morgenfield honors Pops in mighty fine style. 'Nuff for now.

Posted by Ricky Bush at 1:45 PM No comments: