This'll sorta be a drive by post about this year's Navasota Blues Fest because it was sorta a drive by for me this year. Well, not Friday night, because did I managed to see all three of the featured bands. My 21 year old son accompanied me at my insistence that as a guitarist himself, he'd would enjoy Brad Absher and Tony Vega. Tried my best to convince him to go back for Doug MacLeod's set on Saturday, but he had his own fish to fry. His loss. I only had time to take in Doug's performance and catch about half of Bad Brad and the Fat Cats. Really wish that I could have hung around for Texas Johnny Boy, Annika Chambers and Ezra Charles. Had to go, though, so that gave me the blues. I've heard from reliable sources that they all smoked the venue.

Gonna start with the man that George "Harmonica" Smith called Dubb. When Doug MacLeod played in his bands, he never corrected him and he's written many an article about his adventures with the legendary harp player in what used to be Blues Revue Magazine and is now simply Blue Music Magazine. He also spunned tails about his time with Pee Wee Crayton over the years for the same mag. 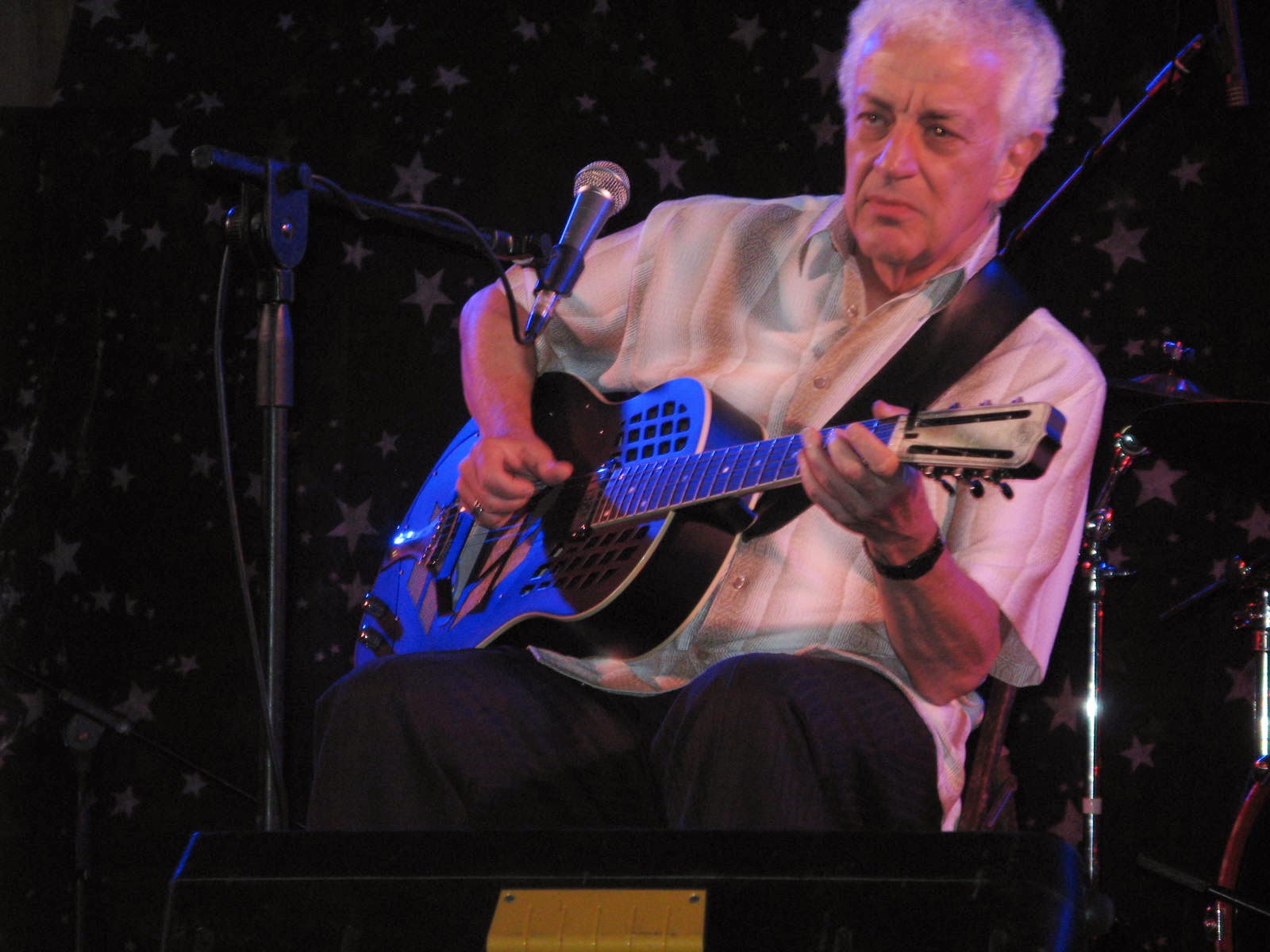 I've been a fan of Doug MacLeod for a long time and was thrilled that the blues fest booked him. Historically the fest never really gains a crowd until well after 4pm, so his 2:30 start time was sparsely populated. We were encouraged to drag chairs down close to the stage, which made for a more intimate setting. The crowd increased considerably by the end of his set. The Ol' blues veteran had them eating out of his hand with his first song. The man has an old soul full of insight and wisdom. Anyone unfamiliar with his music had to be totally surprised that the sound coming from the stage was by a white performer. In fact, I'd say if they'd been blind folded, they would assumed that the man was black and from another era. Even his stage patter oozes such authenticity, no doubt from the years he played with the real deals for predominantly black audiences for years.

He performed nothing but his original music. He told tales preceding each and about each tune with equal doses of deep philosophy from what he learned  from his mentors (mentioning that they'd never use a word like philosophy), hilarious situations, heartbreaking situations, but with plenty of optimism thrown into the mix. Especially, optimism. One song in particular hit exactly on that theme about looking through life with "Brand New Eyes" from his Blue Music Award winning album, There's A Time, which also garnered him their Acoustic Blues Artist of the year. I have no intention of covering his set list here, just need to drive home the point that every song told a story that meant something deeply to him on his journeys through the blues, chocked full of every facet of human emotion. Those emotion left the stage and permeated the audience. Well, at least, it did for me. I felt what he must have felt as he wrote it and now sung it.

Certainly can't leave out how masterful he plays the guitar, picking like Doc Watson one minute and then slipping a slide on to get way down in the alley. His licks rang out sharply picked notes smothered in the blues like pancakes with molasses. To get a taste visit his well designed website at www.doug-macleod.com He's got great video examples of his playing, documentation of all his recordings, lyrics of his tunes, guitar lesson offer, a highly impressive biography, etc...Check out his music store for his stuff, which is a testament to just how long he's been at the blues gig. My favorite CD has always been Live As It Gets with Juke Logan. Maybe because Juke's a cracker jack harp man. BUT There's A Time has just replaced it as my all-time favorite acoustic blues album. I did get to chat with Doug before and after his performance and testify as to what a nice gentlemen he is. As a harp player, I just had to ask him about George Smith. I share this one tidbit, since many harp players are also gear heads. Like many of the legends of the instrument, Smith was far from it. Doug said he never, ever played through an amplifier and most he did to get ready for a performance was call out for a mike check.

Didn't mean to get so wrapped up in just the one blues fest performer (no, that's a lie), because I was plenty impressed Friday night with Brad Absher and Tony Vega. I've always loved Absher and his Swamp Royale band's past couple of fest performance. I've never seen Vega before, but I do have his Taste Like Love album and thought it substantially good. He's really why I invited my son along, because I knew that he'd sling some impressive strings, taking nothing from Absher's playing for sure, but a trio likes Tony's just demands that the guitar do the heavy lifting, while an ensemble such as the Swamp Royale with keyboard and a horn section slips the guitar into the mix when its time comes. Of course, with Absher, when the time comes he leans into it, states his business, then nods off to his sidemen. 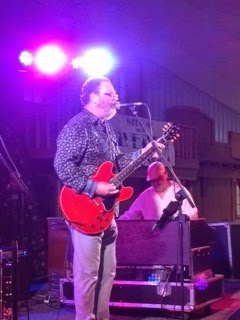 Absher's group mixed and matched grooves from Louisiana, country tinged tunes (such as one by K.T. Oslin), swinging rhythm and blues, and of course, stone solid blues. His vocals are supple enough to cover them well and strong enough put him a big notch above the myriad of bands out there messing around with the blues. Where his guitar serves the ensemble, the ensemble serves his vocals. The man can sing. With that kind of voice. That's meant for the blues. Or whatever the hell he feels like singing, and that's what makes a performance by Brad Absher special.

Somewhere down the line, blues/rock lost its luster for me. After Stevie Ray passed, a plethora of guitar rockers began to stick blues into their set list and call themselves blues players. Most of the time their music  lacked any semblance of the emotion that defines blues. Then there are those, like Stevie, that ease a bit of rock into the blues without diluting what the music is all about. Tony Vega's band fits the bill of good ol' blues that rocks, much like the early T-Birds and Lester Butler's Red Devil's. What surprised me most about Vega's performance, aside from his exquisite and tasty guitar work, was his vocals, which I'd compare to a great actor's ability to shift from one accent to another and get lost in the part. For example, he kicked off his set with "Automatic", which became a signature tune for the aforementioned Butler, and I'll be damned if he didn't solidly nail down the same vocal timbre. When he broke out a slow blues, he eased into the mellow voice of the best soul singers and, then, sang out just short of a gravelly blues scream when kicking the intensity back up. He covered a Creedence Clear Water song and John Fogerty came through loud and clear. A heckuva gear shifting feat that impressed the heck out of me.

Vega's guitar playing is definitely not the lick-a-rama wanker fest that way too guitarist employ when they try to rock the blues. I can't explain where the exact boundary exist between the blues guitar that moves me and the type of playing that grates on me. I'm a blues harp guy, remember, but I know it when I hear it and Vega has it and never crosses my tolerance boundary. He doesn't have that "check this riff out" attitude about him. He and his guitar simply groove along with his songs without distracting from the tune. Oh, don't get me wrong, he can sling it, lean into it and blast away, but with taste. My taste.

I arrived a little late for both opening acts on Friday and Saturday and didn't have my act together. Wasn't sure that I'd be writing down my thoughts about it on the blog because it was going to be so hit and miss. Justin Johnson had a uniquely different spin on things, demonstrating the increasingly popular cigar box guitars. What I caught was a solo performances featuring all instrumentals as he moved from one stringed invention to another, such as home grown resonators, a lap steel on an ironing board and the cigar box. He play a little folk, roots music, jazzy stuff and blues. Check out his gear page at www.justinjohnsonlive.com

Opening on Saturday as a fill in for an ill Michael Birnbaum was the E-flat Porch band. What was interesting to me is that Rudy Littrell played a racked harmonica while thumping a stand up bass. I heard a couple of well played songs sung by guitarist Duane Brown before I got distracted. My bad for not listening to them more intently than I did, but I ended up chatting with Doug MacLeod with the E-flatters providing the back ground music and until Doug took the stage. Check out what they call "angst-free acoustic" music at http://e-flatters.com I'll definitely catch up with them down the road.

I only caught about thirty minutes of Bad Brad and the Fat Cats, got distracted with Doug again, but heard enough to be impressed with the talented blues trio from Austin by way of Colorado. I have heard their music before, being a fan of a young blue harp whiz from Colorado, who played on their second CD, Take A Walk With Me. What I heard was an energetic trio led by Brad Shivers, who has the blues voice and guitar chops to make waves down here in Texas. http://fatcatsofficial.com

I do wish that I could have stayed around for Texas Johnny Boy, Annika Chambers (I've heard nothing but great things about her) and Ezra Charles, but I had to take flight before they did. Check 'em out. http://texasjohnnyboy.com  http://www.annikachambers.com http://www.ezracharles.com

Posted by Ricky Bush at 1:08 PM No comments: