First off, let's not confuse this Big Pete with Big Pete Pearson. They both blow harp and both sing the blues, but this Big Pete's real name is Pieter va der Pluijm and he hails from the Netherlands. You'd be hard pressed to tell by his singing, which shows absolutely no hint of his foreign origins. Matter of fact, his vocal style reminds me eerily of Mitch Kashmar's. Solid. 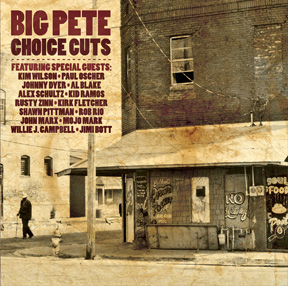 Big Pete Choice Cuts from Delta Groove Productions is an All-Star affair with Kim Wilson, Johnny Dyer, Al Blake, Paul Oscher, Kirk Fletcher, John Marx, Mojo Mark, Shawn Pittman, Kid Ramos, Rusty Zinn, Malcolm Lukens, and Rob Rio lending their estimable talents in guest spots. Now, such discs can be a mixed bag with too many spoons stirring the chili, but if anyone can pull it off, it's Randy Chortkoff, Delta Groove's chief, who has done such for a few years now with The Mannish Boys. No telling who'll end up playing with those cats.

According to Scott Dirks' liner notes, after hearing Big Pete in action Chortkoff got him to the States and onto the stage at the Simi Valley Cajun & Blues Festival. It looks to me that half the musicians at the fest followed Big Pete into the studio after that for a three day recording session of these choice cuts, but the core unit here is Alex Schultz (guitar), Willie J. Campbell (bass), and Jimi Bott (drums). Big Pete is an unabashed disciple of Lester Butler, and in fact led The Lester Butler Tribute band around Europe for a time, and having musicians on board who played with Butler, such as Schultz adds to that vibe. The first song on the disc is Butler's "Driftin'" with Botts' opening whomps driving the hell out of the tune. Big Pete proves he knows his book of Butler right off the bat, complete with a soaring, high energy crescendo to top off the song. He adds the same style where it's least expected, such as on the Jody Williams' tune, mostly associated with Billy Boy Arnold, "I Was Fooled". His harp takes the song where it's never been before, proving that he just may be Butler's heir apparent.

BUT, Big Pete is far from being a one trick pony, enslaved by the master's blasting. A peek at this link points out just how diverse this young Dutchman really must be: http://www.deltagrooveproductions.com/music/newsletters/2011/blasts/choicecuts.html
He lays his harp down on Albert King's "Can't You See What You're Doing To Me" and allows Schultz to strut his stuff, who quotes King's licks, but plays it far from by the numbers. He lets Kim Wilson do his thang on Jimmy Rogers' driving shuffle, "Act Like You Love Me", while he sings the Chi-Town classic like he owns it. He revs the engine with some full chordal whomping and tongue slaps on Slim Harpos' seldom covered swamp rocker, "Don't Start Me Crying Now", with Schulz playing rapid, lights out licks. He relinquishes harp duties to Al Blake, he of the Hollywood Fats Band, on a straight up version of Big Otis Smothers, "Got My Eyes On You" with that wonderful "Green Onions" groove.

He whips out some Junior Wells' style acoustic work on "Hey Lawdy Mama" and absolutely turns Kirk Fletcher loose to do, well, what Fletcher does best, tear up the fret board. Who, by the way, also yanks out some stinging, stabbing leads on Muddy Waters' "Just To Be With You", credited to someone named Roth Bernard. Big Pete also takes his acoustic chops on a ride with a down the river take on Willie Dixon's "I'm A Business Man", which is highlighted by the Hammond B3 swirls from Malcolm Lukens.

He does rip into Little Walter's "Just Your Fool" as if Butler's ghost was standing by his side, egging him on to get down with it, but then he turns around with the big chromatic to do William Clarke's "Chromatic Crumbs" justice, and then he goes deep down in the alley with the Howlin' Wolf's "Rockin' Daddy". Kid Ramos rips and roars with a dirty tone that evokes the spirit of Pat Hare. The Mannish Boys connection to the proceedings arrives with vocals from Johnny Dyer on Jimmy Rogers' "Left Me With A Broken Heart", while Big Pete's harp dips, dives, and swoops through the song.

So, yeah, Lester Butler just might have influenced the young Pieter van der Pluijm to put down guitar and put the blues harp to his lips, but this disc proves that he has a whole lot more in him than being stuck playing in tribute. This All Star affair is definitely his show, and he proves he belongs in that elite group of musicians. 'Nuff for now.
Posted by Ricky Bush at 5:01 PM No comments: