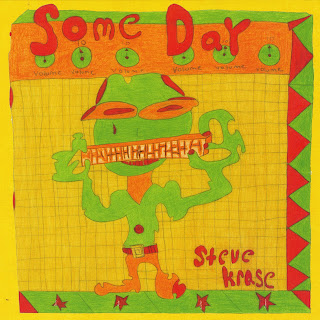 Rip snorting! Yeah, I guess that's the best way to describe Steve Krase's new release, Some Day. Pretty good way to describe the way he attacks the harmonica also. He hits these songs with his blues harp in much the same way that a middle linebacker smacks into a running back, with a full on smash. Some Day, though, is not the standard blues program tackled by most musicians with a mouth full of harp. Most of these songs seriously rock.

Even Bobby Charles' "Why Are People Like That", which I identify mostly with the Muddy Waters' version, and which kicks off the album with a bang shangle lang, takes the tempo and jacks it up way more than a notch or two, and it commences the rip snorting with Krase's harp runs leading the way. His vocals take on a rough, gruff, roaring tone that fits the song well, and that seems to be a knack that Krase has the ability to do. Shift shape his vocals to match each tune's individuality. Actually, I would have pegged a different vocalist on some of the songs because a variety of personas emerge with each tune. And guitarist James Henry comes out smoking to set the stage for what he'll bring to the table. Houston treasure, Eric Demmer, throws down an immaculate sax break and stays around to add his punctuation throughout the disc.

Brother David Krase's guitar opens "Put The Cokane Down"(one of the five songs written by him) with some nicely picked blues notes dueting with a bent note harmonica groove and then Eugene "Spare Time" Murray's bass and Mark Dufrene's drum kit pick it up and drive the shuffling rhythm. Can't say enough about Spare Time's contribution to the overall vibe of the proceedings. He's one of the all time best blues playing bass players in Houston, but, oh, can he rock the house. Yes sir, he can. Henry breaks out the slide to get things wound up and Krase has the harp screaming for mercy along the way.

If I had to put this band in a bag, it would be in the same duffel as the J. Geils Band. They play the blues, but they rock, and I'm pretty sure that they've always been a major influence on Krase's development. He absolutely slips into Peter Wolf's vocal skin on that band's "Jealous Love". He has the vocal nuances down pat, even slipping up into those high registers that trademark so many J. Geils'
songs. There are very few blues/rock bands that interest me, but J. Geils rocked with an irrisitable groove. Same here. They get the groove going, riding the rails laid down by the aforementioned rhythm section along with Demmer's sax bellowing a stupendous honking solo.

Spare Time and Defrene gets the party rolling on another one of David K's numbers, "Goin' Down For The Last Time". It owes a debt to the Freddy King rocker "Going Down", but closer kin to the Jeff Beck version. Thumping bass and driving drums drive this rocking. rollicking tune about lost love. Henry pulls out all the stops and spits out lickity split fire from the fretboard. Krase takes it home by torturing the low end of his harp.

Krase gets the deep harp tones welling up from deep inside on another brother cut and title tune, Some Day. Robert Lewis "Pee Wee" Stephens' keyboard swirls throughout the song and is instrumental in providing the somber mood of the song. Pee Wee's another legend from Houston's blues scene, and it great to hear is contribution to this disc. David K's rhythm guitar and Krase's harp chords are the force that moves this song; about some day finding the mother that long ago abandoned ship.

"She Does It Right" is a cover of the British pub/punk/blues band Dr. Feelgood. That band slung it out in all it's pub rock glory back in the 80s. Krase transforms it into a slow, jazzy late night thang with Demmer's sax contributing to that feel with Henry pulling out some sweet, restrained notes. Krase's vocals join the transformation with deep, understated inflections.

Back in the day, there were two bands that I travelled to Houston to hear more frequently than anyone else; Jerry Lightfoot and the Essentials and Sonny Boy Terry's band (I actually first heard Sonny Boy Terry blow blues harp as a sideman in Lightfoot's band). Personnel in the Essentials changed from time to time, but it solidified behind the aforementioned Spare Time Murray, Pee Wee Stephens, and Krase. Lightfoot's contribution to the Houston blues seen was immense, up until he moved off to Austin searching for a different musical climate. Sadly, he passed away a few years ago. Krase and company pay tribute to the fiery guitarist with the Henry penned instrumental, "Texistential Blues". They've captured the essence of what Lightfoot was all about in less than three minutes, and have done a danged good job of doing it. Henry's guitar comes out smoking and rocks the skin off the blues, with Spare Time and pitch drummer Don Swanson knocking the hell out of the bottom end in much the same way that I witnessed Lightfoot doing likewise many a night.

They segue right into a whomping jam on "Down The Line" with Krase's lip shredding harp runs following the train rhythm booming from Spare Time and Defrene. The jam heads for the ozone with Henry doing his Duane Allmanish best to wound his slide up and down the scales and Krase quoting a bit of "Low Rider".

They get another J. Geils' ("Did You No Wrong") number smashing, crashing, jumping, pumping, and thumping. Krase's vocals once again nail it on the head, and when Defrene joins in on backing vocals the song swings into the stratosphere, accompanied by more sweeping slide guitar by Henry. No one has ever placed the mouth harp into a rock groove like Magic Dick, but Krase does him proud and comes danged close.

Won't find many blues harp fellows sticking their notes into a song by the Violent Femmes, but Krase spends one minute and thirty three seconds instrumentally covering "Blister In The Sun" anchored only by son Gavin's bass lines and drummer Carl Owens poundings until the song slides into a bonafide punkish rocker from David K's pen again, called "I'm A Rocker". It comes out screaming with Krase shooting rapid harp runs from one end of the harp to the other and he keep the pedal to proverbial metal. Can you say garage band rock? Krase can, and he twists his vocal knobs to dial in a harsh roar. Henry slams down rhythm guitar to augment the phrenic pace set by the band.

David K opens his song, "When The Levee Breaks", about hope, salvation, and redemption with rhythmic guitar chords that chime throughout the tune. Krase lays aside his harmonica and just sings the sweet lyrics from his brother's imagination. Henry's slide and backing vocals from Defrene and Tommie Lee Bradley move the song atmospherically, lifting it with a gospel feel, swinging low.

Some Day showcases the versatility of Steve Krase and the band with which he has surrounded himself and also the songwriting skills of his brother David Krase. It's steeped in blues, but moves and shifts in and out and around it, and keeps a groove going with a rip snorting blues harp leading the way. Check it out for yourself at www.cdbaby.com and peak take a peek at www.stevekrase.com 'Nuff for now.