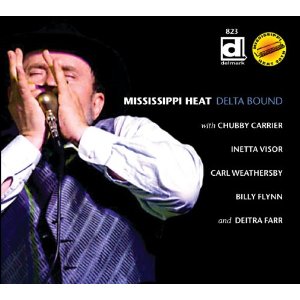 Bring on the heat...Mississippi Heat, that is. The band is celebrating their 20th anniversary in the business of playing the blues by releasing Delta Bound by way of Delmark Records. It's been that long since blues harp meister Pierre Lacocque's dream of getting a blues band up and running in his adopted hometown of Chicago materialized and he's never had to look back. The aggregation has seen a myriad of personnel changes over the years, but Lococque has always managed to pull together a team to keep his vision intact. I went looking for my CD of 1992's Straight From The Heart, with Robert Covington leading the group on vocals, and had trouble finding it. Was going to revisit what they did twenty years ago. Took awhile to realize that I hadn't bought a CD player yet and had my copy on cassette. That machine has been shelved for awhile. The point is that I've been a fan of Pierre Lacocque's playing for quite some time now.

Deitre Farr took over the vocal duties after that debut album, with songbird Inetta Visor settling in for the duration in 2001. The band has never been a straight up, down the river Chi-town blues band. Lacocque has always mixed and matched blues styles along the way and Delta Bound carries on the tradition, with Lacocque leading the way with his tough as nails, fat and crunchy harp tones. Previous Heat members Farr and guitarist Billy Flynn join the core group of Visor, Giles Corey/Billy Satterfield (guitars), Chris "Hambone" Cameron/Johnny Iquana (keyboards), Joseph Veloz (bass) and Kenny Smith (drums) for the anniversary celebration. Lacocque throws in the incendiary guitar work of Carl Weathersby on a few cuts and Chubby Carrier's accordion for some Louisiana flavor with Keith Blair adding his guitar chops.

Lacocque kicks things off with fat, octave tongued chromatic work on the opener, "Granny Mae", and locks in with Cameron's organ pumps to provide for a horn driven sound. Even though Lacocque's tone throughout the proceedings rips and roars for the most part, he can call up a rounded, horn like, tenor sax vibe at will, or for variety, lay back a bit and display his acoustic chops. He proves his acoustic meddle on the piano driven, "What's Happening To Me" and "Trouble In His Trail". He pulls out the full on, amped up tones on quite a few numbers, but really pulls out the stopper on "Sweet Ol' Blues" with tongue flutters and nice lick runs and on the instrumental, "Lemon Twist". On the former, Flynn sticks in one his trademark understated, but spot on solos. On the latter, Lococque calls to mind Rod Piazza while Veloz' bass lines drive the tune along with Smith's insistent drum beats and Iquana's organ swirls.

Weatherby's guitar work has always leaned towards a rock attitude, but stays blues rooted and manages keep it on that side of the line. A bit more high energy, I guess. He rips into "Mr. Mistreater" with tenacity, and he takes the old chestnut, "Don't Let Me Be Misunderstood" for a pretty good ride. Being so accustomed to hearing Eric Burdon turn the song inside out, it took me a bit to adjust to Visor's version. She won me over and can claim ownership now. Speaking of ownership, Lacocque penned the vast majority of the songs on this set and he, of course, writes from the female's perspective of the blues, so there's plenty of my man's done gone, done me wrong, or he suits me to a tee blues. He turns some mighty fine lyrics into some mighty fine blues songs for his songbirds. The Blues Matrix threw me a little, but it's a fun time tune with reference to the movie, which of course, I never understood.

Speaking of songbirds. I was hard pressed to distinguish between the vocal stylings of Visor and Farr. I listened to the CD before checking credits and had no idea which songs Farr sat in upon. Neither are what I'd call "blues shouters". They don't go for the vocal histrionics of some that ply the trade. I like that. Don't get me wrong. They both have powerful voices and bring forth that power when the song calls for it, but not for the sake of "listen to the octaves that I can hit". They get what the deep blues is all about and both go about the business of bringing that to Lacocque's lyrics.

Even though Lacocque's harp is always front and center, Mississippi Heat is about solid, in the pocket, ensemble work. Whether it is on the traditional Chi-town stop time shuffle, "Lookee Here, Baby" with Kenny Smith illustrating why he is one of the most sought after drummers in the genre, the jazzy, vibraphone ladened (Kenneth Hall) "Going To St. Louis", or the second line whomp of "New Orleans Man". All the parts and pieces blend and make the whole groove happen.

So, if it's taken you twenty years to discover what Mississippi Heat is all about, I'd say better late than never and this CD would provide a great entry point for the introduction. Well played, well sung, well written, and well, you know, just a darned good blues recording, especially if one's taste run towards great blues harp.
'Nuff for Now.
Posted by Ricky Bush at 10:40 AM No comments:

I've always been a big fan of Annie Raines. She got one wail of a big tone on the harmonica, whether she's playing acoustic pre-war blues with her partner, Paul Rishell, or flat out, gutbucket, fat and greasy amplified blues harp. I was about to say that she's got the fattest tone of any woman that I've heard, but that would be misleading....she has as fat a tone and anyone in the game; male or female. Think Big Walter, no really, she can whom the deep stuff. I've got several of her recorded examples around the house, but one that stands out is her performance at one of Mark Hummel's Blues Blowout, where she holds her own with all the gentlemen on the bill. Anyway, now she shares what she knows on a set of instructionals Without further ado, I simply pass along the press release announcing what has to be a valuable resource to assist us harp players in gettin' it down better.

Blues Music Award winner and foremost of only a handful of female harmonica players Annie Raines has recorded the most comprehensive harmonica instruction to date and the only interactive video format with "Blues Harmonica Blueprint" with 263 minutes of instruction, 68 video lessons, and over 75 charts. It will be available as interactive video software available via DVD-R or download July 31. Raines is eminently qualified to teach as harmonica legend James Cotton calls Raines “James Cotton Junior” and Muddy Waters sideman Pinetop Perkins said, “She plays so good it hurts."

Presented for the beginner to advanced intermediate player, this revolutionary video drills deeper and wider than any blues harmonica course ever published. Over two years in the making, with hundreds of hours dedicated just to the visual notation guides and animations, "Blues Harmonica Blueprint" features animated graphics showing where the notes are as they're being played; detailed video breakdowns of songs and exercises; text descriptions; live band jam tracks so you can play along with a blues combo including guitarists Paul Rishell & Troy Gonyea; an adjustable metronome; and a guitar tuner in multiple tunings.

One of the challenges of teaching harmonica is that one cannot see what a harp player is doing and TrueFire's animation over the footage of Raines cuts through that barrier.

Having learned from Jerry Portnoy who has toured with Muddy Waters and Eric Clapton, Raines has performed on three Susan Tedeschi albums and with John Sebastian over her distinguished twenty-five year career. She has been the touring and recording partner of Paul Rishell for over twenty years. They have released six albums together, including the W.C. Handy Award-winning 'Moving to the Country.'

Over the past 20 years, TrueFire has worked with over 600 top artists and educators building what Guitar Player magazine calls "the planet's largest and most comprehensive selection of guitar lessons. Over 220,000 students from 140 countries are enrolled in various TrueFire educational programs"

http://truefire.com
Posted by Ricky Bush at 7:17 PM No comments:


Here's a great Blues In Schools mini documentary forwarded to me by my great friend Sonny Boy Terry. Very enjoyable and commendable. 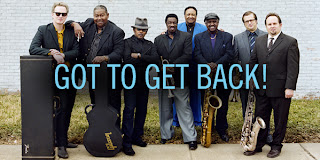 Trust me. Just click this and listen to Percy Wiggins sing his butt off behind the wailing Bo-Keys.

Memphis soul group The Bo-Keys teamed up with vocalist Percy Wiggins to bring a double shot of Memphis Soul and R&B. Wiggins, who cut classic Northern Soul sides in the 60s for ATCO and RCA, is featured on two original songs penned by the Bo-Keys and Wiggins. The Bobby "Blue" Bland-inspired R&B of "Writing on the Wall" and the Southern Soul ballad "I'm Still In Need."

Posted by Ricky Bush at 2:07 PM No comments: