THE DEVIL'S BLUES is LIVE

Those crime fighting bluesmen, Mitty Andersen and Pete Bolden are officially back in action in The Devil's Blues which popped up on Amazon this weekend. The book is the second in my series featuring these two blues harp musicians. Once again, they lay their Marine Bands down long enough to rid the world of a bit more of the evil that finds a way to cross their paths. This time out they are trying to clear the name of a good friend accused of blowing up the congregation of his church and end up in the sights of a wicked paramilitary group aimed at bringing Christianity to its knees.

The Devil's Blues is available in paperback at Amazon and will roll out on Barnes and Noble and a dozen other sites over the next couple of months. It'll also be offered in all the possible eBook formats. The publisher, Barking Rain Press, has eBooks available now, and they also offer a FREE PDF preview of the first four chapters.

Once I receive a stash of books, then I'll sell signed copies from here. There will be a "buy now" button in the sidebar, similar to what exists for the predecessor, River Bottom Blues. I dang sure appreciate those of you who ordered that one and will dang sure appreciate being able to fulfill orders for the new adventure. Anyone who still needs a signed copy of River Bottom Blues, it is certainly still available and provides a significant amount of background on the protagonists, but The Devil's Blues stands alone as a story quite well. If Mitty and Pete are your kind of guys, then help me get the word out.

I'll supply updates as the book reaches more retailers. In the meantime, I'll get another round of CD reviews up and rolling here on the blog. Thanks so much for tuning in...and stay tuned. 'Nuff for now.
Posted by Ricky Bush at 1:04 PM 2 comments: 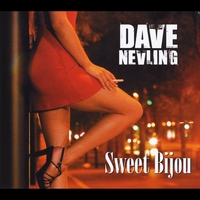 The first time I heard Dave Nevling play, the tone he produced really impressed me. More than that, though, it was his intonation on the instrument which floored me. I've reviewed his work hear before, and I'm pretty sure that I said something like "he worries the hell out of a note" on the harmonica. I can't come up with a better description of what Nevling does with each hole that he hits than that. He's back doing just that on his latest release, Sweet Bijou. I'm also quite sure that I mentioned back then that if anyone deserves wider recognition beyond his Texas stomping grounds that it is he. This release further solidifies that opinion.

If you pick it up, just skip down to the final track, Sancho, and see that I ain't fibbing. He romps through a Latin tinged instrumental and gets everything he wants out of each hole that crosses his lips and tongue. He immaculately intones deep bends, double stops, flutter tongues, octaves and runs up and down the diatonic. I don't know if he'd call himself a perfectionist or not, but if so, then he's achieved that goal. Then go back a few tracks to Drink You Away for a taste of what he pulls out acoustically. To me, what separates the great players from the also rans is an acoustic tone that proves they don't have to rely on amplification to achieve a fabulous tone. Any weakness in intonation will be revealed with just harp to mouth. This track proves that Nevling has no weaknesses when it comes to pulling notes out of our humble diatonic.

Of course, I'm darned sure not saying that the other tracks aren't just as worthy; they are in spades. Nevling is certainly the proverbial triple threat. He writes great songs (these are all originals), plays the hell out his harp and sings his butt off. I'm quite sure that apprenticing with Gulf Coast legend, Bert Wills, was quite instrumental in helping him get his vocal chops together sufficiently enough to strike out with his own band. He vocals are fine through out, but if you're still skipping around, cue up Night Into Day. It's a marvelous ballad with a vintage vibe that he just slays vocally. I was going to compare it to a classic that it reminded me of, but as I sat down to write, that memory faded away. Actually, I hate doing those comparisons anyway, so forget about it.

A Dave Nevling release is aways about flowing through a variety of moods and modes. Upside is a nasty little number, lyrically as well as tonewise, on which he produces an accordion sound from his harp; I suspect with help from the Lone Wolf Octave pedal that he sticks into this Meteor Mini Meat amplifier. Guitaris Tom Bryan dishes out a fine solo on the tune and plays pretty darned tastefully throughout.

On the title cut, Nevling nails down and absolutely rules the use of hitting octave runs on the swampy song and stays with that Louisiana vibe with a rocking rhythm on Vieux Carre (which I assume is about partying in New Orleans' French Quarter). Lenora reeks of an Otis Rush style (see, I did use a comparison after all) minor keyed blues on which he whips out his skill on the chromatic. He doesn't chime in with the big harp until the five minute mark of the seven minute tune, but he doesn't hold back once he does. Bryan helps get that slow mo groove going with some nice string bending, similar in style to...naw.

He rounds out Josiah, about an innocent man executed, by playing organ to help set the tone. Drummer, Joe Campise and bassman, Jeff Parmenter are instrumental in providing stomping rhythms to lend a bit of seriousness to the song. Nevling pulls some of his deepest, dark tones on this one.

Connie's Cafe and I Need Love are both jumping, rollicking numbers. The former jumps and jives with some rockabilly picking, standup bass playing off the drums, and more expertly delivered octaves, flutter tongued licks (which he's mastered) and note pulls from Nevling. The latter is just some good time rock and roll on which he and Bryan bounce notes off each other. Heck of a tight band that he's leading down the road.

If he's playing third position harp on the opening cut, She's All That, and I think he is, then I'd have to say that it's some of the best harmonica that I've heard using such. If it's not in third, then the playing is deep toned and deep fried and well played anyway.

That's about all I have to say, other than...just get it. I know CD Baby has it available. His previous releases can be found there, also. As a disclaimer, I guess I need to mention that, yes, Dave Nevling is a friend of mine, and that, yes, he offered me a copy. I sent him a copy of River Bottom Blues as a swap. I got the better deal. I know that he'll read my book only once, but I'll listen to Sweet Bijou numerous times.

Posted by Ricky Bush at 1:27 PM No comments: