The Blues Lives On In Spain

The wife and I took a trip to Spain and met up with my son. He was wrapping up a semester abroad engineering program through Texas A and M in Ciudad Real. We decided to spend a few days in Seville before connecting with him in Madrid. I could certainly lay a "wanna see the slides from our vacation" post here on the blog because we certainly have tons from every possible "must see" attraction from both cities, but I'll just keep this focused on the blues that I ran across. We did have accommodations in both cities that allowed us to walk to everything that we had an interest in seeing. My wife had been to Spain several times and my son had been in country for six weeks, so I basically just tagged along. Glad he had perfected how to order beer, wine and food.

On Saturday, I think, we strolled toward the small cafe/pub where we had purchased tickets for a Flamenco show. Along the way, I heard the wailing tones of someone playing the hell out of Muddy Waters. Whoever it was, had the master's slide licks down solid. Then, I heard Little Walter harp licks hitting the air. 'Course, I told my wife, "Gotta find where this is coming from". Around the block sat a one man street band kicking that heavy Delta blues. He had a mic strapped to his harmonica rack, a foot gizmo with various percussive trinkets to provide a bit of rhythm, and a Bart Simpson and sis strapped to his other foot dancing to his music. Dude's name is Little Boy Quique and he definitely knows the genre. 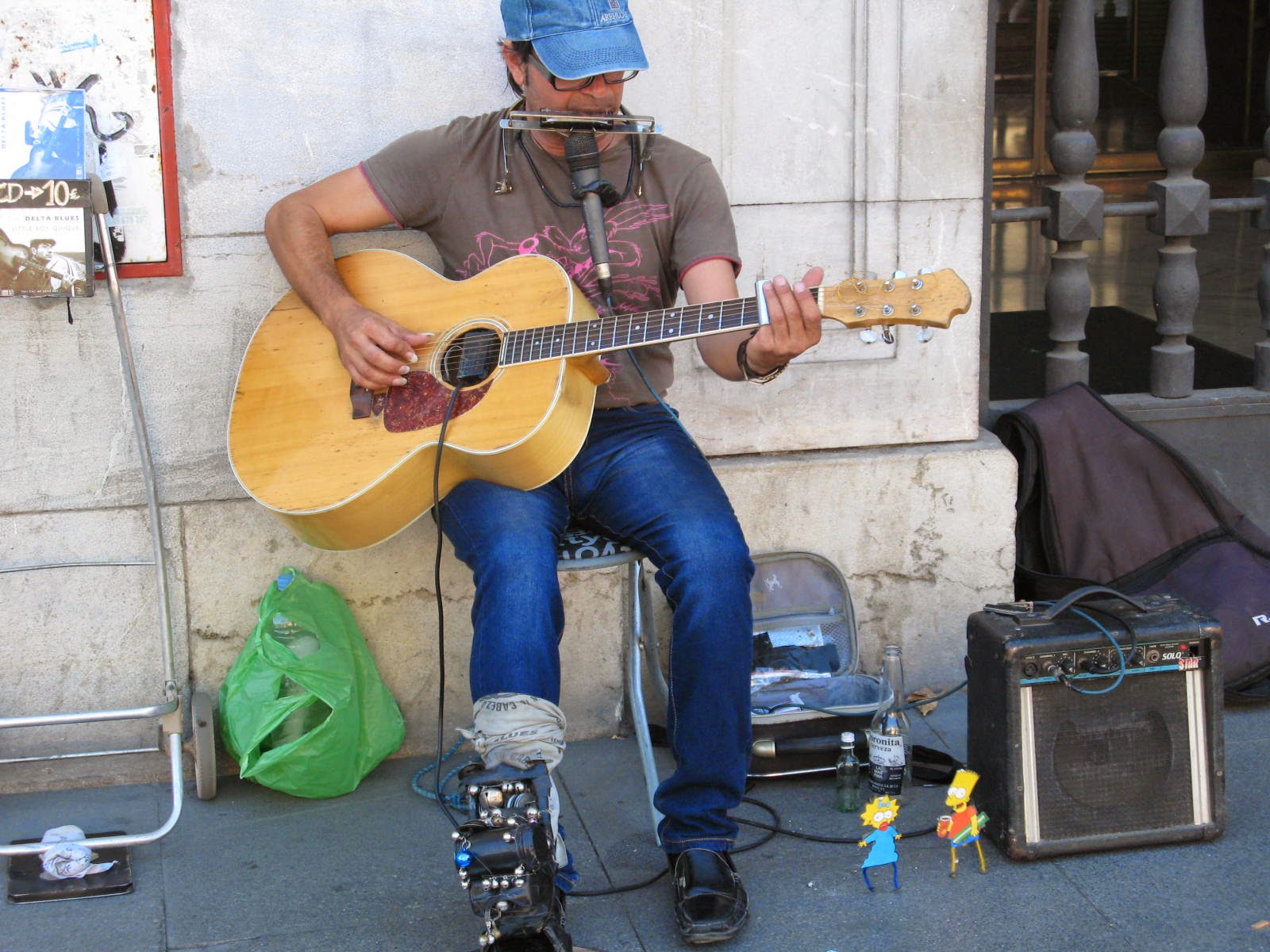 We sat and listened to a few tunes (I did mention that we were on the way to a Flamenco show, didn't I?) and his grasp of the blues absolutely blew me away. I bought a CD from  him and he said that he'd sat in with Mud Morganfield (Muddy's oldest son) night before and that Mud was still in town. He mentioned a club that he frequently played and we tried to find it after the Flamenco gig to no avail. If we had not pre-purchased those tickets, I do believe that I would have hung with this guy the rest of the evening and followed him wherever the blues was being played had it been up to me. Wish I'd run into him on Thursday. I would certainly have checked out Seville's blues scene a lot more thoroughly. I'll run a review of the CD at some point.

Before leaving for Spain, I got in touch with a Facebook buddy from Madrid. Josep Pedro is a blues enthusiast, who writes about the scene over there. Check out his Blues Vibe FB page. He provided me with a substantial run down as far as what was happening during our visit. He told me that the La Coquette was THE blues club in Madrid and that John Primer would be in town. Since July 2 coincided with my son's 21st birthday and he's become quite accomplished at playing blues guitar and since John Primer would be there, then I cleared it with him and the wife that seeing a great Chi-town blues guy would be the right thing to do. We searched out the club while we walked around the area a couple of days before. The son had a great map app on his iPhone that led us around on our walks with pin point accuracy (most of the time). The club was indeed a short walk from the hotel. 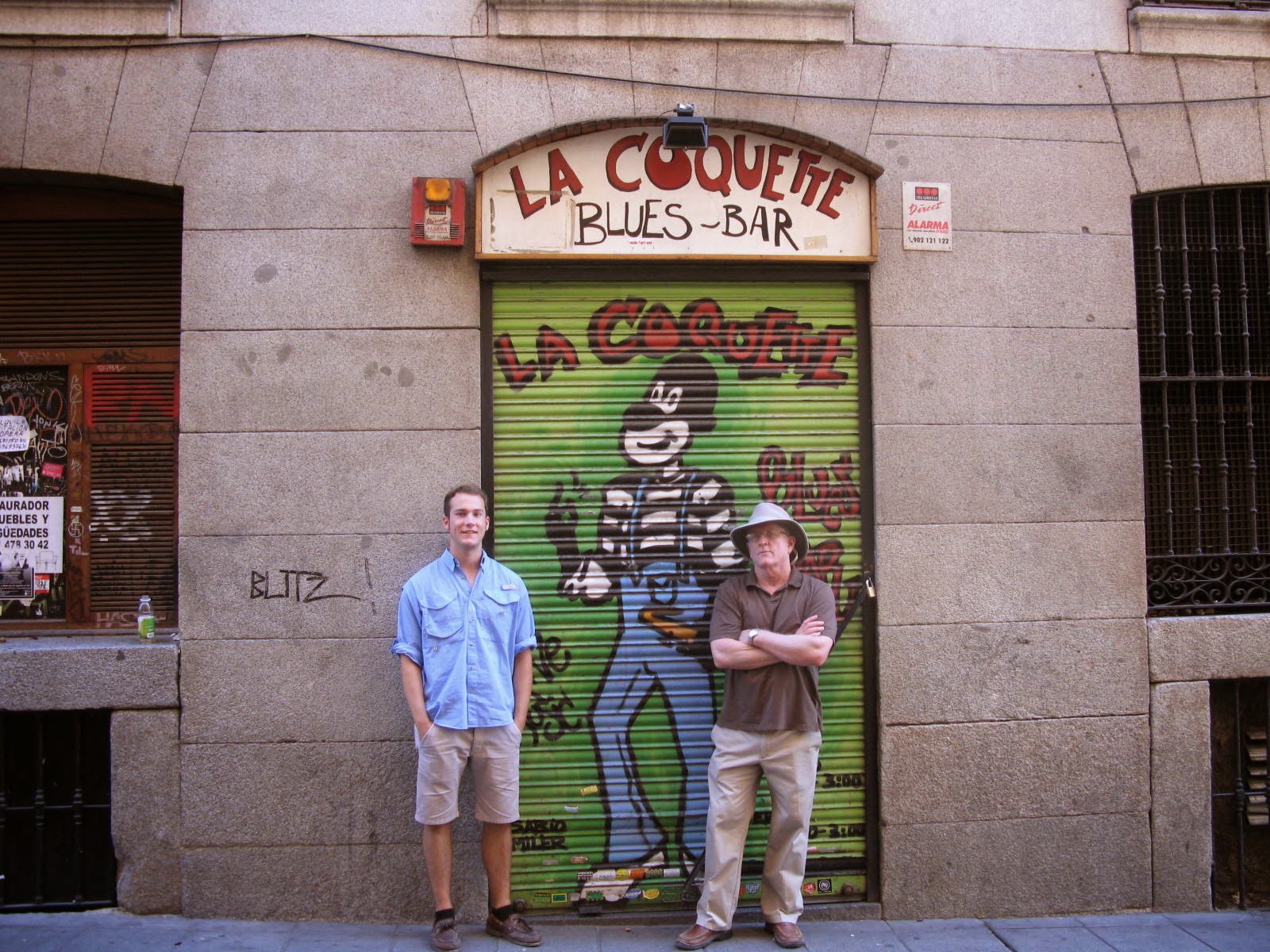 On Wednesday night, we strolled over to the club early because my research revealed that it was a small  basement club (that turned out to be an understatement). I wanted to be sure that we could sit down through the performance. We got there at around 9:30 since their Facebook page said a 10:30 start (of course it was an hour later, but that seems to be normal for a blues club). Smallest room I've ever seen for any type of club. Two small amps sat along the wall, which surprised me, because I knew that Primer had Bob Stroger in tow and there was no bass rig to be seen, nor drum set. 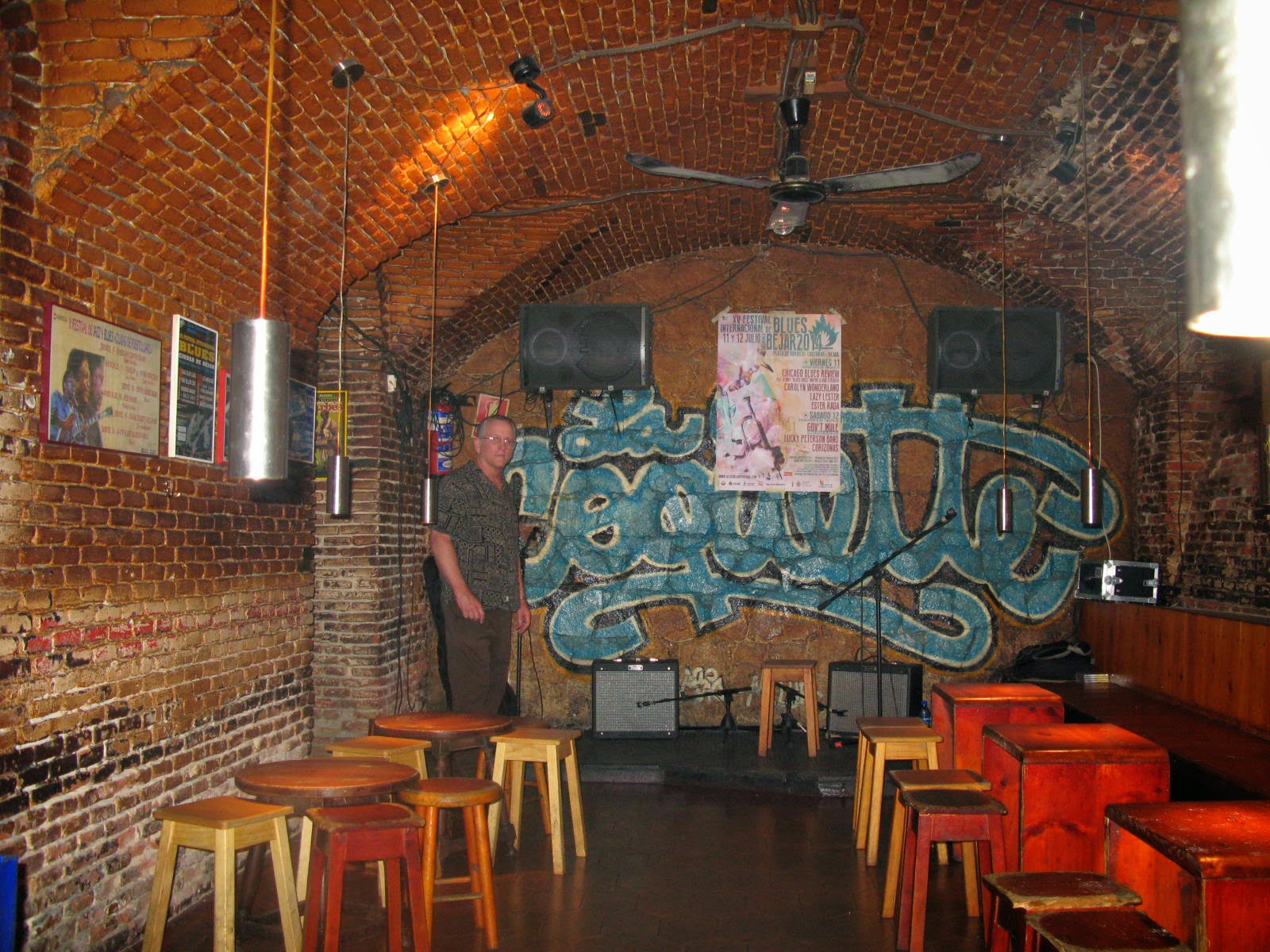 By 11:30, the place was indeed packed. I heard a slight commotion next to me at the door and heard a voice boom, "Man, here I am having to travel to Madrid to see you play" and then John Primer stepped through the door. I turned to the big man who issued the words, and said, "Do I hear a fellow American?" He said, "Hell, yeah." Turns out that it was Wayne Baker Brooks (Lonnie's son) and his guitarist Nic Byrd (formally of The Kinsey Report). They were in country to play a couple of shows, one being a USO July 4th gig at the embassy. We chatted about the time that I saw his daddy, his brother Ronnie and himself at a show in Houston. Really enjoyed hanging out with them. 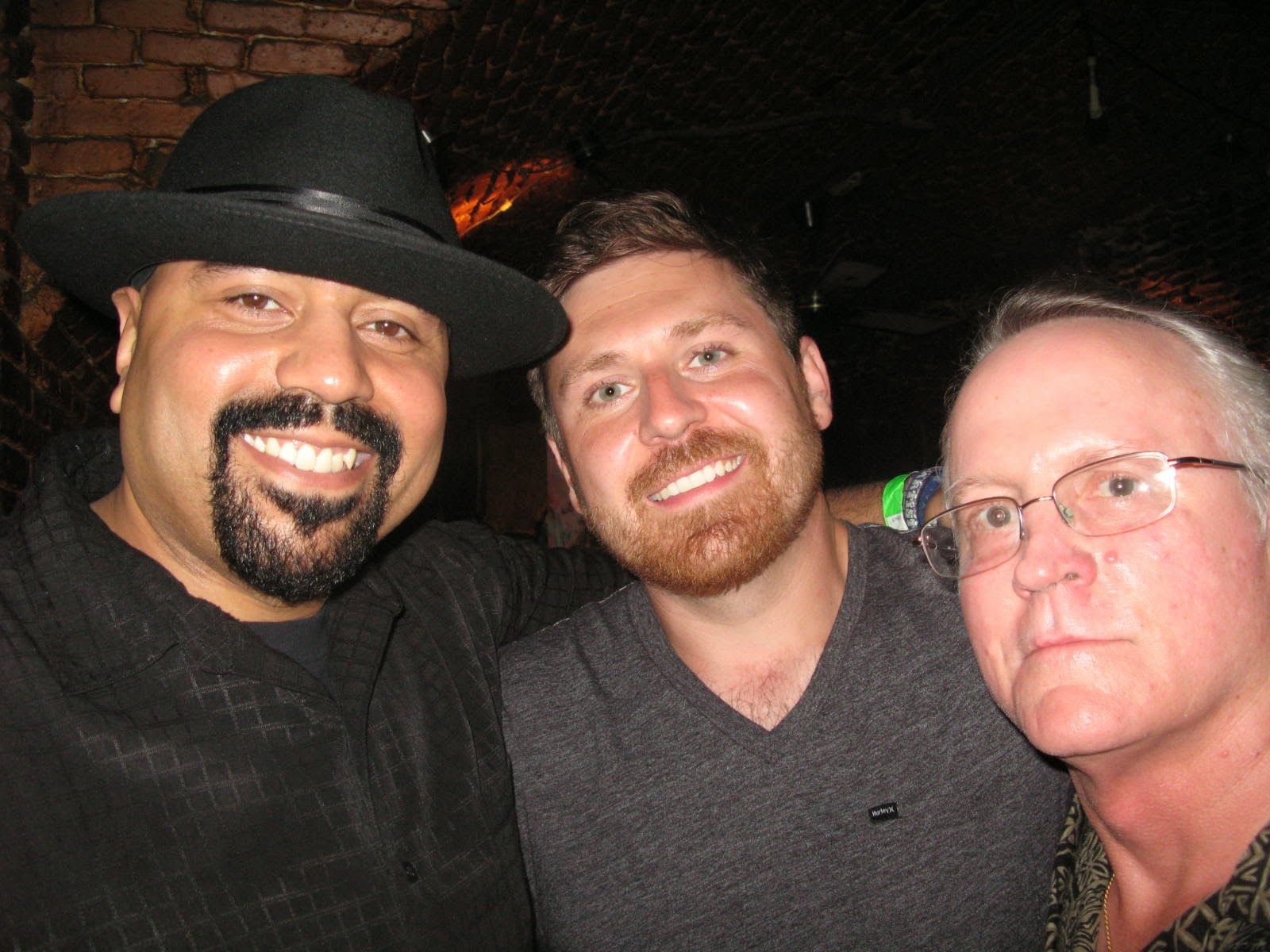 Primer wasted no time cranking out some Muddy Waters and stayed in that solid Chicago blues groove for the only set that we were able to stick around and watch. Stroger took a seat stage left and simply enjoyed the show. A enormously impressive blues harp man from Spain, Quique Gomez, knew his book of Little Walter extremely well. He swapped off playing acoustic and lightly amped up. We had to catch an early morning flight out of town, so took off a 1 am. Told Wayne Baker that, and he said, "Man, I'd just have to get on the plane drunk." 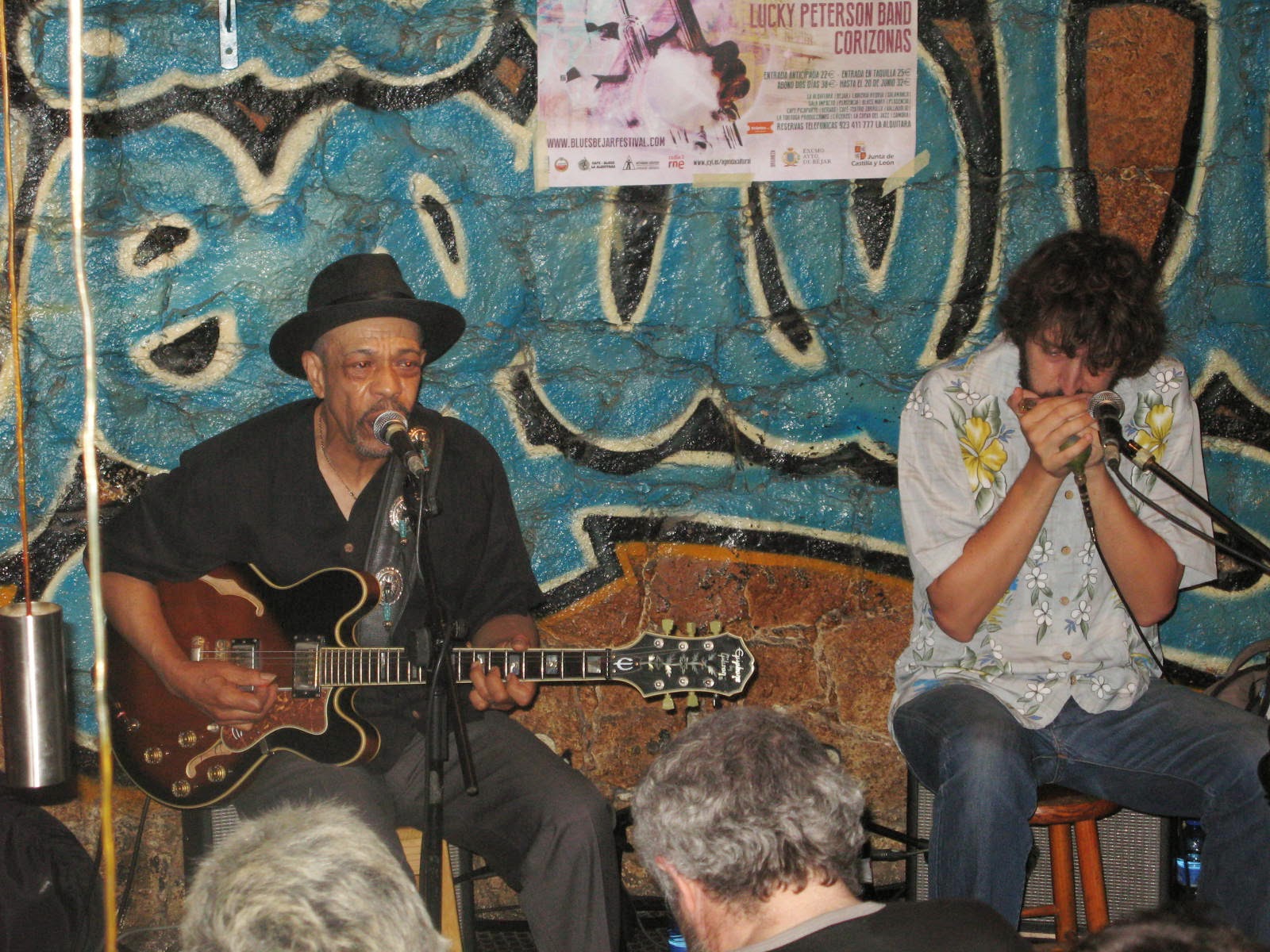 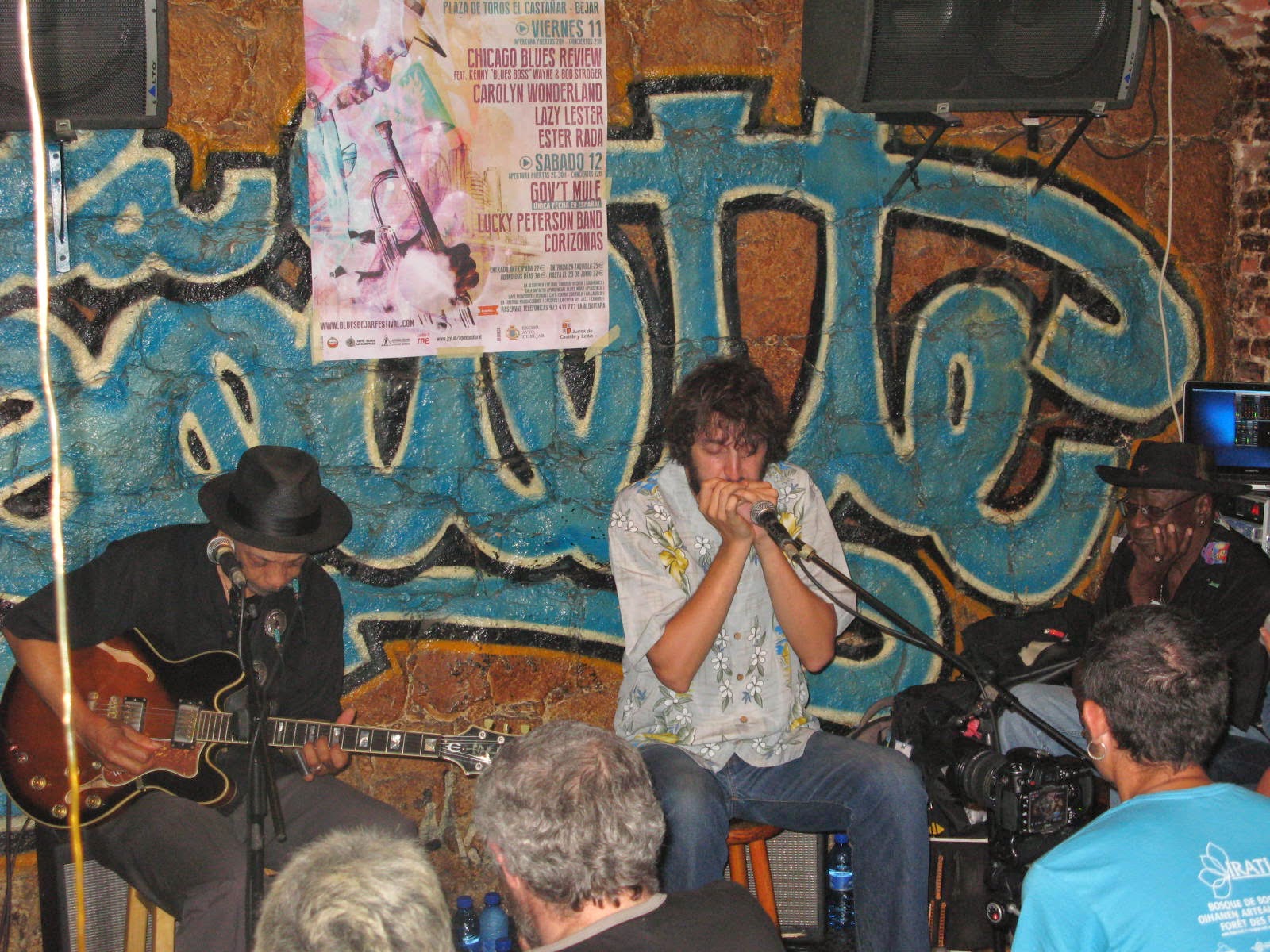 What surprised me about the club goers was the age group. Most were 20 and 30 year old fans who were vocal and enthusiastic. They knew the music well. Here in the states, most of the crowd is made up of old farts like me. Posters around the club, advertising past and future blues festivals, indicated a significant interest in the music though out Spain. The blues was definitely alive in Madrid on this night.

As it turned out, we got to the airport and faced a 2 1/2 hour delay. Then, as we boarded, got hit with a severe hail storm that rocked the plane. After they checked the plane and we were deemed safe, they grounded the flight crew for too many hours and the flight was cancelled. Ended up spending July 4th in our nation's capitol with a 7 hour layover. What I didn't know, was that Primer played with a full band at Clamore's Jazz club on the night of the fourth. Had I known, I definitely would have planned better. Oh, well, that's the blues.