This is sorta kinda a continuation of my thought threads from yesterday, so I'm just rolling on. I was going to pull up the post and simply edit and add, but I do have enough swirling around the brain to just do the do again today.

I failed to mention that a few friends from my school days in Brazoria came into town expressly to watch our band play at the Brewery last Friday. My brother and his wife played host while we tried our best to entertain them. It made for a very special night for me. Word is that they'll return at some point down the road.

Let me add a link to David Barrett's marvelous website here. Lots of folks just aren't going to fork over the $17 a month for harmonica related stuff and search out similar free online offers. I balked at doing it for a long time until I decided that I wanted to see his reviews of the numerous small amplifiers and stayed a couple of months. And that's the deal. One can pay out for a year or month to month and cancel anytime. As I said in yesterday's post, I'm back to wandering around the site and finding plenty of value as I go, such as the aforementioned tube rolling vids on the Princeton. That in itself was worth a month's fee.

Barrett interviews a slew of harmonica pros and those are super. Since I re-signed up on the site to glean a bit more info to polish my tongue blocking a bit more, I went through the vid interviews just clicking on each player's responses to Barrett's question on tongue blocking and some on their preferred equipment. What I'm saying is that I haven't viewed each interview in their entirety, so I'm looking forward to watching them. At the time, I just wanted to hear what master blasters like Gary Primich, Kim Wilson, Rod Piazza, Gary Smith, etc...had to say about TBing the harmonica.

Now, and I mentioned somewhere in the history of this blog, that I curl my tongue (or UBlock) to get a single hole. Just the way I found it easier. For many years, I really thought I was an odd duck out of water, because I knew of no one else that did such. Everyone puckered or tongue blocked. UNTIL I bought an instructional video from Norton Buffalo who played harp for Steve Miller. Right off the bat he mentioned that he curled his tongue. Anyway, I felt validated. Soon, from online discussion groups such as Harp-L, I found others mentioning they did the same thing. We were rare, but there and maybe even Little Walter did a bit of it.

CUTTING to the chase as to why I'm rehashing all this is the Barrett interviews. One of my favorite present day harmonica players is John Nemeth. Immaculate vocals and his harp tone is wonderful and he said he strictly UBlocks his notes, of course except for playing octaves (which of course, takes tongue blocking to get the split notes). Said it was the way he learned and has never seen a reason to do otherwise and ain't gonna try and change now. Epiphany for me. From there, another one of my favorites, Mark Ford, said he did the same thing and can even manage slapped notes with the embouchure. Steve Guyger even said that he's trying it out, because he was told by a reliable source that Little Walter did employ the method from time to time. SO I was surprised and felt additionally validated and not quite so hell bent to perfect tongue blocking. 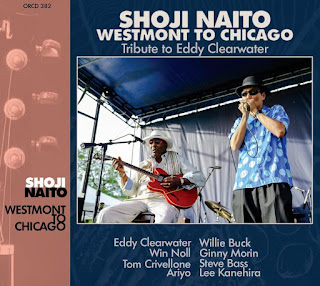 BACK to discussing Shoji Naito. I first became aware of Shoji during a trip to Chicago (it's documented in the archives here) and he was playing guitar with harp man Morry Sochat and the Special 20s at the seafood restaurant. They were fabulous, by the way. I later learned that he was also a great harmonica player and I had heard good things about the backing tracks he offered on his website for us harp players. I mentioned a couple of posts ago that I did download a few of those and they are wonderful. Anyway, he has been putting out a few videos on youtube during the pandemic stay at home time period and I caught quite  few of those. He plays both tasty guitar and harmonica. His tribute to Eddy 'The Chief' Clearwater, who he played with for fourteen or so years until Eddy passed in 2014, caught my eye and then my ears after I downloaded it.

Westmont to Chicago is a solid unadulterated Chi-town blues release with guest performances by several musicians well known on the Chicago blues scene. Not going to get into an extensive review (mentioned that I've moved away from doing so), but this recording is certainly notable for some of Eddy Clearwater's last recordings and reveal a veteran bluesman that hasn't lost a step, vocally or on guitar. Shoji shines on slide guitar on Ogden Avenue and lays down some tuneful harp on a few cuts, his best while conjuring the memory of James Cotton on Like The Creeper. Great release honoring one of Chicago's great bluesmen. If you lack yourself some of The Chief's stuff, go grab something from his catalogue. Anyway--'Nuff For Now.
Posted by Ricky Bush at 2:36 PM No comments:

Back In The Saddle

Might as well start off with how sweet it was to play a gig once more. Rob Moorman and Company jumped back into action at the Brazos Valley Brewery here in Brenham to a very responsive and appreciative crowd. Very apparent that people are more than ready to get out of the house and support the live music scene again. The venue limited the tables available and customers to a table and had employees wiping down chairs and table tops. Hand sanitizer sat by the entrance. Lots of people sat at picnic tables just outside the entrance. Very, very few people wore masks. Just the absolute joy of playing our music again overcame any trepidation I felt at the beginning of the night. If the virus doesn't sneak up on me, we'll do it again at one of our frequently played venues, Home Sweet Farm, this coming Friday (June 12). And, by the way, our bass player, Andy Chiles' and his wife Sandy's band Tailgate Poets with Charlie Kelm on guitar will at the Brewery on Sunday.

We christened the Brewery's new Tap Room, where they keep something like 15 or 20 of their brews on tap behind the bar. The room seems to be about 40 feet long (maybe) and 20 feet wide and a 15 foot or higher ceiling. We sat up at one end with a rolling glass door at our back and another one stage right. I assume they'll open those up during nicer weather than the 90+ degrees hitting us. Such a situation could pose a problem acoustically, but I think the sound was surprisingly good. Rob's Bose p.a. system has yet to meet a room it can't whip. The same for Jason Moorman's guitar rig. He can adjust it to slay any situation and Andy Chiles has a new bass rig that is absolutely killer, weighs less than my Princeton and has a righteous thump. We kicked butt, if I do say so myself.

For my harp buddies: I took a chance and took my 68 Custom Princeton Reverb, hoping I could turn it up to a decent tonal volume. It was perfect for the room. I made some tube swaps that seemed to give the amp a creamier tone and a little more sag. Nothing wrong with my set up before, just a bit smoother. Not that anyone but me notices.

I might have mentioned before that I bought the amp a couple of years ago based on David Barrett's review of it on his website. I paid the subscription price just to read his review of small amps, which was worth the money for the couple of months that I decided to utilize it. The tons of information that one of the most knowledgeable harp instructors lays down is amazing. Anyway, after getting the amp I swapped tubes around quite a bit and settled on some of his review suggestions. The one that bothered me was swapping a 5u4 rectifier for the 5ar4 rectifier that the amp came with, given the 5u4 draws more current and could be detrimental to the transformer. I did try it, but it seem to gut the tone, so I kept the 5ar4 in. I settled on a 12at7 in the V1 preamp position and left everything else stock. Played many a gig with this setup. The amp seemed to really bloom once the speaker broke in, which seem to take longer than I expected.

NOW...back to David Barrett. I spent a couple of months combing through his website back then and then decided to cancel. THEN...during this quarantine period, I decided to polish my tongue blocking skills a bit more and no one teaches it better than Barrett, so I resubscribed and began delving a little deeper into what was available. Gary Smith, who taught Barrett a thing or two early on about tongue blocking and has tone to die for, is one of the contributors. I clicked on his contributions, which are extensive, and noticed several vid links regarding tube swapping. Clicking on a link revealed that they were using the 68 Custom Princeton Reverb on which to experiment with rectifiers, preamp, and power tubes. At the end, a 5u4 rectifier, a 12au7 in the phase inverter slot and a 5751 in V1 impressed them the most.

As I mentioned earlier, I was not impressed with the 5u4 rectifier and actually bought a Weber Copper Cap version to keep current draw in line to try out. Still didn't like it until I tried the combo Gary and David used mentioned above. Suddenly, the amp tone that they were illustrating, with a bit more sag and slightly smoother sound, came through in my amp. My thinking is that it all lies in the phase inverter tube being swapped from 12ax7 to 12au7 allowed the different rectifier to perform better than before and without the gutless tone I heard prior. I do not know how lowering that tube did that trick, but I do like the sound. I'd tried a 5751 in V1 before that seemed to gainy for me and I think the phase inverter swap is key to that tube working sweeter also. THAT said, I can see where going back with the 5ar7 in a louder band environment might be necessary. That's not us, though. Next gig will be outdoors, and I'll see how well the current setup will work.

Alright. I have more on my mind. I've said enough. I'll get back to Shoji Naito's Westmount to Chicago cd next time. Maybe. In the mean time, maybe I'll see you at Home Sweet Farm on Friday. 'Nuff for Now.
Posted by Ricky Bush at 11:34 AM No comments: