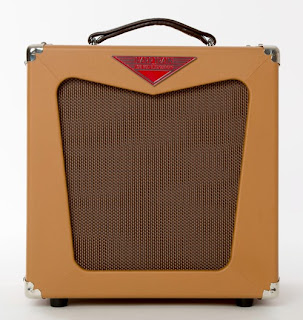 I have one of these now. It's called a Harp Train 10 produced by the Lone Wolf company and is designed specifically for us harp player (duh, thus the name). I've written a word or two about the harmonica specific pedals they produce, particularly the ones I have...the Harp Break and Delay. I also have their Terminator pedal that opens up a harp mic by matching the mic output and amp inputs better electronically and also has an output jack to allow connecting two amps in tandem or feeding direct into a p.a. But, anyway, this is about the amp.

I bought this for three reasons: 1. It was made by Lone Wolf 2. It had the cheapest price tag of any amp designed for harp players (ordered mine the first day of sales and it arrived for less than $350) 3. I decided I wanted a new amp, as in NEW amp.

That's right. I've never owned a new amp. All my amplifiers were built prior to 1965 (a late '30s Bell Sounds, a '60s era Silverstone 1483, a '60s era Kalamazoo I, ditto for the Sears XL, and Voice of Music amp from an old record console). All were amps that I dug into and modified to be more harp friendly, so I wanted new for a change. It's not like I needed another small amp, because the Voice of Music and Kalamazoo covers that well, but did I say I wanted new for a change. I've come close to pulling the trigger on new before, but always backed off.

First thing I did was A/B the HT10 with the Kalamazoo I (my go to amp for great tone). First impression had me leaning towards the 'Zoo in terms of tone and volume. The longer I played the amp, and it could have been a matter of speaker and tubes breaking in, the Harp Train began to edge it out. Considerably. Had to reverse my opinion pretty quick. I did stick my harp mic at my boom box and drown the amp in Little and Big Walter, James Cotton, Muddy Waters, etc, etc for a few hours to loosen things up. The amp proved to have way more meat and bottom end than the 'Zoo, leaving the latter sounding a bit more tinny in comparison. Great tone! They both have ceramic 10" speakers in them, but the HT10 speaker came alive. The Harp Train 10 has two knobs. One called Loudness and one called Balls, which is a boost knob according to their website. It's that boost knob that takes the amp out of the one trick pony realm, which is basically what you get with the 'Zoo or a variety of small amps like the Champ. I'm thinking they incorporated a lot of what they stick in their pedals like the Harp Break where you twist a knob and get something different going on.

I played around with the Balls knob vs Loudness for quite awhile. One up, one down, the other up, the other down. Different strokes for different folks on that account. Different tonal palette with each move. Not sure about the website claim that it's probably being the loudest small amp on the market, but it do get loud. That being said, I did read a user mentioning that setting the Loudness knob just shy of 4 and the Balls on 3 that he was on the verge of feedback and complained that a harmonica specific amp should be able to exceed that. I played through an old Green Bullet with a hot CR element and an Astatic crystal and could ease up to 5 with the Balls on 4 before fighting feedback issues, but I understand the point he makes. It was substantially loud, but then again that was playing at my house. I have a Greg Heumann volume knob on the Green Bullet and reduced it and did get the amp blasting up around 6 without a noticeable drop in tone. Couldn't really tell if it got louder.

This past Friday I took the amp out to gig with a trio that I play with at an outdoor gig. They play a few blues tunes, but mostly '60s stuff. We're just two guitars and a harp, so there's no competing with a bass thumping and drums. The lead singer decided to go electric, he usually plays acoustic, so he was playing through a Peavey Delta Blues amp. The lead guitarist goes through a p.a. rig, owns the equipment, mics everyone up, and keeps the stage volume relatively low. I set the HT10 volume at around 4 and the balls on 3 to somewhat match the Peavey's volume. The HT10 rocked it. My bandmates loved it's tone.

I'll play with these guys at a small venue next month. Small is the optimal word. I've taken the 'Zoo and set it for the tone I want to project and they've rejected it as being too loud. After playing around with the  HT10, I do believe that it'll do low volume with good tone. We'll see and I'll report back.

So, hell yeah, I'm glad I got something new for a change. One thing I don't care for is having to pull the chassis to change tubes in the amp. I don't have a problem with the Sovtek tubes supplied in the amp, but I'm one of those curious guys who likes to see what a tube swap may do (over the years, I've grown fond of particular brands) and I'll have to unscrew and screw back into wooden cleats to do that. Not that big of a deal. I've got a NEW amp and it rocks it. 'Nuff for now. Check 'em out at:
http://lonewolfblues.com