Buckle Up With Steve Krase

I called Steve Krase's Some Day a rip snorter when I reviewed it back in early August. His new one, Buckle Up, pretty much follows the same kick butt formula. Throw down a couple of songs in a J.Geils groove such as his original I Like Them All and a re-invention of the Willie Dixon warhorse, I Just Want To Make Love To You, sprinkle in another couple from the pen of his brother, David, a cover of a Jerry Lightfoot slow burner, and a dos dose by the legendary Houston blues pianist, Big Walter 'The Thunderbird' Price. 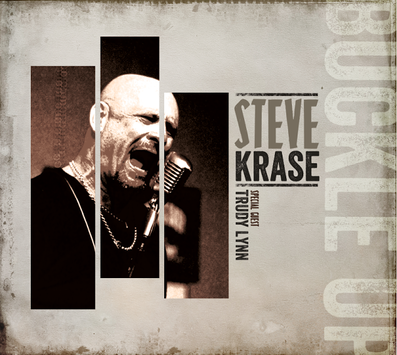 By the way, Krase has been a very busy boy as of late. He just returned from the Lucerne Blues Festival in Switzerland backing Trudy Lynn (a Houston blues treasure) in support of her well received Royal Oaks Blues Cafe, which he released on his label, Connor Ray Music (www.connorraymusic.com). He also accompanied her to the Blues Blast Awards in Chicago in October. Playing harp among the blues elite at these events certainly had to have raised his profile beyond the banks of Buffalo Bayou, not to mention giving the rest of the world a taste of what Lynn brings to the blues table. Her CD is up next in my review queue.

Anyway, Buckle Up kicks off with some Jerry Lee Lewis brand of piano ripping from Randy Wall on brother David's rockabilly style rave up, Jolene. He bangs the hell out of the 88s, while bassist Terry Dry and drummer Michael Morris kick the song down the road at breakneck speed. Krase rips on harp and roars on vocals and either guitarist, James Henry, or D. Krase wails on in on slide guitar.

Daddy's Got A Cadillac (Mama Rides A Mule), written by Dry and his wife Jamie, lopes along much like the old chestnut, She Caught The Katy. The song starts out with daddy driving the Cadillac with mama on the mule, but reverses course before the song is over. Leaves daddy on the mule and mama in the Caddy, and leaves me wondering how much of the song is biographical. Lot's of slide guitar heavy grooves laid down by Henry, with Krase working his harp licks in tandem more than a few times.

Trudy Lynn's husky, full throated vocals own I Just Want To Make Love To You. She makes you feel it and believe it. She owns the tune much in the same way that Koko Taylor did when she covered the blues and belts it out much in the same way. The band wallops it in the aforementioned J.Geils' style groove, with Krase getting his Magic Dick mojo rolling--really rolling. The band hits the song full stride and rocks full out.

Krase covers Misery and Big Bad Woman from Big Walter Price. Big Walter could do the jumping, rockin', piano shaking blues better than anyone. I mention in my previous review that his Pack Fair and Square caught the attention of the J.Geils' band, which they turned into one of their hits. The former is a stop time jumper, rocking with Bobby Markoff banging the keys in rhythmic support, while Krase's harp leads the proceedings from the get go to the end, flying from the middle registrar with swoops up to the high end, punctuated with single note wails stabbing the air. The latter is simply a fine example of jump blues at its best, with Krase emulating horn lines with his harp. Guitarist Henry plays with a bit more restrain, for him, on his solo, but it is mighty tasty. Both songs lament the trouble that women presented in Big Walter's life. Krase adds a little spoken historical, humorous comment in those regards.

Trudy Lynn wrote the title tune, Buckle Up. Krase's harp kicks it off and puts it in a groove like an uptempo Shake A Hand. The harp notes set the rhythm and he glisses up, down and around the tune with backing vocals from Lynn and bassist/producer, Rock Romano. Krase gets quite wild ass with his harp licks before the song closes.

Krase covers one of my favorite Lightfoot songs, Night Train (From Oakland) opening with Henry shredding on guitar and then it settles down into a slow down, low down groove as Krase eases in on the chromatic harp giving the song its somber mood. Henry is turned loose to do as Lightfoot did, soar those blues notes into the stratosphere.

David Krase adds raucous, resonator slide guitar to his Blueshound (which I'm quite sure has nothing to do with James Nagle). It's a jaunty little number, but is embed with dark overtones in terms of the refrain: Dead man laying by the side of the road/I kick him in his head just to watch him roll. The harp licks employed are deeper and darker and helps set the tone, they're nice and fat, too.

As I mentioned earlier, Krase's I Like Them All has J.Geil's written all over it, vocally, rhythmically, and Magic Dickishly. Henry whips the slide on the strings with abandon. The band rips it up on this one.

The set closes out with, Now, a jazzy instrumental written by the brother from the same mother. Kinda a Musselwhite Christo Redemptor sort of thing and predominantly features Krase's ability to knock it out. Drummer Michael Morris is instrumental keeping the instrumental in the groove. Jazzy stuff can wonder off course without a good drummer keeping the flow down the right stream.

So. Yeah. Steve Krase has another rip snorter on the market. As he says in the liner notes, made loud to play loud. So, get yo hands on it and do so. Check out the Connor Ray Music website linked above and for darned sure, check out the one of a kind, Trudy Lynn.