I previously posted just how much Eddie C. Campbell means to me a couple of times. The first time I ever stepped on a stage and played amplified harmonica was with a stupendous ChiTown blues band that Eddie C brought to Texas back in the day. He graciously invited me up to sit in that night without having a clue as to whether I could play a blues lick or not. A few years ago I took my wife and son to eat lunch at Buddy Guy's Legends during a visit to Chicago. Lurrie Bell and Matthew Skoller were doing an acoustic set and the only other person in the club was Eddie C, who remembered the gig fifteen or so years ago. He invited Lurrie and Matthew over to meet me during their break and told me that he was Lurrie's Godfather. Best lunch break I ever had.

A few months ago Eddie C had a stroke in Germany and is finally making it back to Chicago. He's slowly recovering, but the medical bills have added up substantially. Bob Corritore sent this out in his recent newsletter, so I thought that I'd pass it along. 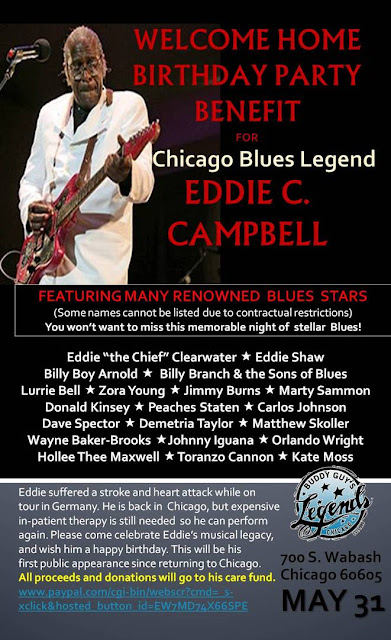 Posted by Ricky Bush at 7:32 PM No comments:

Out of the Comfort Zone

Just trying to get the groove back here. I'm not going to offer up a bunch of lame excuses at to why I've been neglecting the ol' blog, just going to jump in and write a post. Many of my posts on Back In The Day have had to do with my journey with the harmonica. Posted lots of thing about how I got to where I got to with the instrument and the tales relating. This one will be relative to that.

Somewhere about a year ago, a fellow named Rob Moorman contacted me and said that he had a coffee house gig and asked if I'd be willing to add my harmonica to a couple of bluesy tunes during the evening. "I could do that," I told him. I met up with him and fellow guitarist, Raymond Lynch the night before for a little run through.

One tune was a Randy Newman song called "Guilty", by way of Bonnie Raitt, which was indeed bluesy enough and the other was the pretty much a 12 bar groove by Cookie and the Cupcakes' "I've Got You On My Mind". He felt that I could hang with "Will The Circle Be Unbroken" at the end of the show, also.

Now, Rob used to be on the road as a professional musician back in the day. He ramrodded an outfit known as The Silver City Saddle Tramps in Austin during the Cosmic Cowboy wave. His group caught that wave and surfed it throughout the region fairly successfully. At some point, he found Jesus, quit the biz, returned to his hometown, found a traditional occupation, and raised a family of kids (most of whom I taught in high school). This gig would be his first such one in about thirty years or so.

For you gear guys (or gals), I decided to plug straight into the p.a. with my Astatic crystal mic running through a Lone Wolf Harp Break pedal and a modified for harp Dan Electro Echo pedal. The Harp Break adds a bit of distortion to the mix and the Dan Echo, a little slap back echo. He asked if I could play along with his opening number, John Denver's "Country Roads". Said I'd give it a whirl. What I stuck in there seemed to work well enough and I attempted to step from the stage.

"No, don't go anywhere. You should be able to add something to Merle Haggard's "Silver Wings"," he said. So I did that one also. At that point he would let me leave.

Keep in mind. When the music strays from blues, I get away from my comfort zone. We strayed way away from that zone. We played music by Bob Marley, Neil Diamond, Buddy Holly, Hank Williams, Dave Loggins, Elvis Presley, The Eagles, The Beatles, and even Herman Hermits, with a handful of originals thrown into the mix. To say that I was lost and remained so most of the night would be an under statement. I flew by the seat of my pants and just hung on throughout most the proceedings, and dearly hoped that I wasn't screwing his songs and wonderful voice up too much.

I really thought that I'd exceeded my limitations and was relieved that he and Raymond thought that I'd done just fine. I also felt that "Okay, I made it through a trial by fire, and that that was that." I figured that he learned his lesson and wouldn't ask me to do that again. The next night he sent me a Facebook message asking me if a date suited me for the next gig. "What?" I replied. "You want me to do that again?" "Well, heck yeah, I do. Can you make it or not?" That was a year ago, and the Rob Moorman and Company trio has been doing it once a month since then. We'll be back in action at Mobius Coffeehouse this Friday. I thought that somewhere along the line that I'd hear, "Thanks, but we won't really be needing you any longer", but that hasn't happened.

I still feel way out of my element (the other two guys are outstanding musicians) and I'm still way more comfortable with the blues. It does keep me on my toes, especially when he takes a request from the audience or brings something new to the stage. That happens frequently, but it's all been quite fun.

P.S. on gear--I have experimented from time to time with different stage gear scenarios. One night I brought in my Kalamazoo amp (which is a great blues harp amp), and even though it is low wattage, it prove to be a bit loud for the room, so we turned it down and miked it through the p.a. Turning it down robbed it's tone, so I went back to plugging into the p.a. I've stuck with the Harp Break and Dan Echo, but I've used different mics. I used my Shure 545 stick mic a couple of times, but I missed the volume control that's built into my Astatic. The last gig I tried out my Shure Bullet with a controlled reluctance element that mic whiz Greg Heumann stuck a volume control into, and it worked really well. I think it's more compatible than the Astatic with the straight into p.a. arrangement. Hard to say, since I only do this with the trio once a month, and sometimes Raymond totes in a different p.a. head.

'Nuff for now. Excuse me while I go practice "Three Little Birds".