Time Slips On By

I went out on the proverbial limb last month when I proclaimed that this release by Rich DelGrosso and Jonn Del Toro Richardson oughta be a great one. Now that I have the CD in hand, I can back that up with...this is a great set of fine blues. Time Slips On By represents exactly what I love about the blues; tasteful instrumentation, heartfelt lyrics and solid vocals. It must be  the 'Del' that's a part each of their names that make them such a nice match for each other's vibe. They come at the blues from different directions, like Laurel did with Hardy in comedy, and just like the comedic pair, the blend of their talents makes for a marvelous performance.

They split the songwriting credits pretty evenly on the fourteen cuts offered here, with a couple of collaborations--one of which kicks off Time Slips On By, grooving on an infectious boogie with DelGrosso's mandolin getting the party going. Del Toro Richardson jumps in and helps drive the rhythm with his Silvertone twanging the thang. DelGrosso is a large man and his gruff, low down voice fits him and his Baby Do Wrong perfectly. When he sings, he is the blues. He and Del Toro swap leads back of forth and then in unison (as they do throughout the disc), and then they ride the groove into the Southeast Texas sunset.

The title cut, written by Del Toro R, yanks the mood into a completely opposite direction as the jumping, jiving opener...and it's an epiphany for me to hear just what a fit Del Toro R's vocals are for the soul/blues style. This song reminds me a great deal of the type of stuff that brother's Syl and Jimmy Johnson would get going when they collaborated. The vocals are solid soul, while the guitar licks are stone cold blues. Producer Mark 'Kaz' Kazanoff and his Texas Horns (w/John Mills & Al Gomez) swell up that vintage type of tonal pallette effectively, but it's the sweet vocals that really put the soulful spin on it. What you won't hear in the soul/blues genre is mandolin being picked in and around the flow of such a song, but DelGrosso sure does make it work well; along with a couple of finely picked solos.

I know that I haven't mentioned that this ain't no blues harp album, which is somewhat a departure from the usual here (not always, though). My good buddy, Sonny Boy Terry, does light up DelGrosso's Mandolin Man with fine, fine high end harp work and low end thump on this shufflling tale about Yank Rachell. The lyrics also revolve autobiographically around DelGrosso's explaining why and how such a large man came to play the smallest stringed instrument made. As far as the how, he states that it's all in my touch/ask my baby about that. Sonny Boy also helps put DelGrosso's She's Sweet smack dab into the down-in-the-alley blues with that fatbacked tone of his.

Del Toro R's Katalin epitomizes the blues of the Gulf Coast so well that you can smell the salt in the air while listening to the tune. Also it's helped along by the fact that Katalin hails from Pearland, Texas and Joel Guzman's accordion flavors the gumbo mix. DelGrosso squeezes out some nice slide licks to intro the song along side Del Toro R's chunky rhythmic chords and slips along fine and dandy throughout the cut. Del Toro R's sharp note attacks meshes well with DelGrosso's weaving slide.

Even though the liner notes state that DelGrosso's Shotgun Blues in Yank Rachell inspired, Del Toro R's guitar and The Texas Horns puts the song onto Texas turf. The opening chorus had me imagining Albert Collins pickin' and grinnin' with a couple of saxes and a trumpet driving the tune in a Houston direction. It just has that funky blues groove that the 'Iceman' perfected so well. Del Toro R's doesn't copped Collins here, but being the Houston cat that he is, those stylistic chops just sometimes fly out , but then he'll take off into a differently blues zone from his own lick vocabulary.

Where's Laura is an instrumental that takes a left turn into more of a jazzy territory. I'm not a guitar gear type of guy, but my thought is that Del Toro R is pushing his sound through an octave pedal in order to achieve the watery tone that effectively set the mood. DelGrosso proves that he can make that old 'taterbug' get a jazz groove on and they let Gomez rip a trumpet solo.

If I caught Summertime Is Here on the radio and didn't know better, I definitely would think that David Hildago was singing the song with his Los Lobos compadres. My feelings is that Jonn Del Toro Richardson is touching base with his roots on this one. Again, Guzman's accordion really helps with the setting of the tune, along with Del Grosso's fleet mandolin picking. I could almost see the barbeque smoke drifting through the air as the song eased along.

Then Robert Cray jumps to mind once Del Toro R opens his mouth on The Real Deal and picks his guitar notes out on his fretboard. Did I mention that the man can do the soul blues thing? Yeah, he proves once again that he can sing it and sing it well. DelGrosso stretches out with some fine picking mid-song. You know, I have some of Yank Rachell and Johnny Young's stuff, but Del Grosso has taken the blues mandolin to a different level than those two--I'm way more of a fan of that little thing now.

He really wounds up the 'taterbug' on Good Rockin' Johnny, which I assume is an instrumental honoring Johnny Young. He and Del Toro R banter licks to a fro for a rollicking good time with mighty fine string bending and it sounds like they are jamming on Chicago's southside.

Del Toro R shifts his vocal timbre into blues mode on Baby Please, which impresses the heck out of me. I'd have never pegged the guy singing Time Slips By and Baby Please to be the same person. He may not have the same range as John Nemeth, but he does shed stylistic moods just as well. It's this I-IV-V, twelve bar pattern that hook me on the blues in the first place and these two guys seem to be in their element when they wade off into one and commence to sharing licks. This is fitting finale for Time Slips By and sums up the interplay between two great musicians. So, save some of that Christmas money for one of the best releases of 2011--due out on January 18.
Check 'em out here: http://www.mandolinblues.com/ and http://deltoroblues.wordpress.com/

Merry Christmas and Happy New Year from Texas y'all.

P.S.--Thought I'd give a shout out to promoter Mark Pucci, who sent me this disc along with fine releases by Joanne Shaw Taylor and Jim Byrnes. I'm really digging on the Byrnes' Everywhere West right now. Did I mention that Jonn Del Toro Richardson is one of my favorite guitarists and has been since his Cactus Moon jams. Well, he is.

Never heard of these guys until a cut came on B.B. King's Bluesville satellite radio station and I just had to find out who the harp player might be. He's Hank Shreve and plays with the Ty Curtis Band and they hail from the Pacific Northwest. Man, there sure seems to be an abundance of toneful harpmen from that part of the world. I don't post a whole lot of vids, but I had to share this one from the International Blues Challenge finals a year or so ago. They placed second.  Music starts at the 1:39 mark.

Somewhere along the line I lost interest in the Grammy Awards. Maybe it was the year that I saw Jethro Tull nominated in the Heavy Metal category. Or maybe it was the year that Michael Jackson's glove dominated ALL the categories. I do always check out the blues nominees to see if the Grammy folks have any common sense about what is what. They never cease to amaze me, but I guess they try. Here's the 2011 lineup:

Cyndi Lauper! What the hell! Sorry, there were just waaay to many fantastic traditional blues albums released to throw down the girl just wanting to have fun in the category. I applaud her for doing the blues thang, but not for a Grammy. Not for a blues Grammy. I'll pull for my harp buddies, Musselwhite or Cotton to grab this one.

I also don't think that Dr. John nor Bettye LaVette belong on the Contemporary blues list. Again, waaay too many "real" blues licks were put down on those recording devices to choose these two efforts. Both great artists (as is Lauper), but neither album fits the genre. Never was a big fan, but since Solomon Burke passed away recently, he'd get my sympathy vote--and the man could sing the blues.

AND, I guess another reason that I quit paying much attention to the Grammy is that I recognized fewer and fewer names each time out, BUT--what the heck is going on here:

HEY, what happened? I know all these geezers (even John Mayer's playing a pre-war blues tune). Must mean that Rock is an ancient genre or something, huh? I dunno. Quite puzzled. THEN there's this:
Jeff Beck's name is all over the place for best instrumental, best rock duo or group, best rock album (along with Neil Young's LeNoise). And then again, there's the Robert Plant album's inclusion in the Best Americana Album slot. Well, I guess if the Brit can sing the blues, then he can sing Americana too--whatever that may be. He's up against Willie, so I don't think he'll win it. They do have The Black Keys thrown into a couple of categories, so I'll pull for those young pups.

AND, if they'd feature at least half of those blues artists, I'd tune into the show. They won't, but you can better Cyndi Lauper will be knockin' out some Rollin' and Tumblin' on prime time. Maybe she'll have Musselwhite in tow again. Let me know how it goes.
Posted by Ricky Bush at 1:41 PM 2 comments:

Have a Greasy Christmas

Just spotted these over at Bluebeat Music's website. They've got to be a hoot 'n a half. I'd say if they can't get a Christmas party rockin', then nothing will. 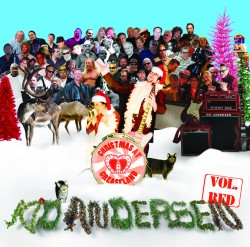 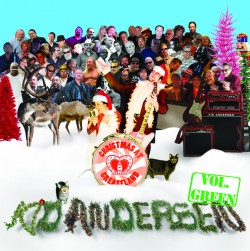