Trekked over to The Bugle Boy in La Grange once again to witness a legend of the blues once again lay down some of that Old School, down in the alley, gut bucket blues that very few choose to do any longer. Paul Oscher plays nothin' but....and he'll tell you that that's only what he knows how to play. It's more that skin deep with Oscher. He's lived the life since taking up with Muddy Waters back in the late 60s and he's still got it going on. I'm not going to go through his bio and all that stuff because it can be read first hand on his revamped website here 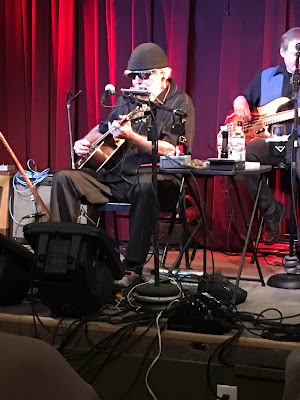 I've been meaning to make if over to C-Boys in Austin, where Oscher conducts a happy hour blues blast every Thursday, since the last time he visited The Bugle Boy. Just thinking about hitting Austin traffic that time of day raises my blood pressure, which I don't need. The last time Oscher kicked butt at The Bugle Boy, he was doing his one man band thang. He did not disappoint then and he danged sure didn't disappoint this past Saturday night when he brought drummer Wes Starr and bass player Randy Glines with him for a trio gig. Wes Starr has played with EVERBODY in the state of Texas and is on countless blues recordings, so I will not attempt a list of such. I will say that he has been traveling around with Mark Hummel, Anson Funderburgh, and Little Charlie Baty with their Golden State Lone Star Revue. Anyway, Oscher brought the an 'A' list with him this time. Glines has been a go to bass dude around Austin for quite some time. His main gig for a long time was with the late, great Jimmy LaFave. Anyway, the gig cooked from the time this rhythm section sat down and banged out an introduction piece that brought Oscher to the stage.

Once seated, technical glitches arose around his wireless mic rig attached to his harmonica rack that sent a signal to his vintage Premier amplifier. The glitch being...no sound. His young roady valiantly attempted to get it going, to no avail. They tried a number of things that would not work, until someone in the audience said, 'Just plug into the second channel of your guitar amp'. Oscher was reluctant to blow harp into the Fender Hot Rod Deluxe, not trusting it's tone for harp. He did it though and once again it proved to me that great harp tone lies not within the speakers of an amp, but within the body cage of the man. His fat, low down, greasy tone blasted out of an amp that I would consider a poor choice for amplified harmonica. There was no dialing in, just plug and play. He was quite perturbed that his reverb/delay rig wasn't operational either. Not to worry. His tone rocked. At intermission, he  was very apologetic for the tech issues and didn't feel the sound was optimal. I assured him, as a blues harp aficionado, that his tone was absolutely killer. I know of no harp rack players who can suck the blues out of a harp like Oscher can. At the last gig when I visited with him, Oscher pointed to his chest and said, 'This is where I get my tone' and that's where it came from last Saturday, because his equipment had let him down.

To say that Oscher can capture a room with his charisma and his tales of playing with the greatest bluesman whoever lived, is an understatement. BUT it is the playing of the blues that he learned from the great bluesmen around him that rocked the house. He played with the real deals and he is the real deal...ain't no pussy footin' around. When he slips his slide across his guitar strings and it sounds so eerily exact to Muddy's wail, when he blows Little Walter's stuff like Juke, or Jimmy Roger's That's Alright, or the myriad of his originals that seep ChiTown authenticity, well, the hair on back of your neck just may stand on end. I can't sit here and tell my readers exactly what he played, because I was in the moment each and every time a note hit the air, or his roughed edged (but unpretentious) vocals filled the room. When Oscher sings about having the blues, there is not doubt that he either does, has, or will have. Stages ooze and drip the blues that Oscher occupies and no one can avoid getting it on them.

I can't say enough about Glines and Starr (who, by the way, had never played with Oscher before). Even as a one man band, Oscher manages to fill a room, but these two guys followed him and chased him down when needed  and gave the stage a lot more wang dang doodle...all night long. The music mushroomed with their help. There certainly could have been a lot more patrons at The Bugle Boy. In my mind someone as legendary and has the stature of Paul Oscher should be a sellout event. There ain't too many folks left who do it like Paul. The right way.

Great show by a great bluesman and his sidekicks. 'Nuff for now.

Posted by Ricky Bush at 4:16 PM No comments: