Back in April, I really believed that my blog had become a lost cause. In the middle of writing a post about Trudy Lynn's latest album, everything wonked out all of a sudden. Nothing worked right. I couldn't italicize or boldface anything. Paragraph spacing screwed up. I couldn't post pictures. I could not edit mistakes. And I spent almost an entire day trying to figure out the problems and didn't. I assumed a hack job jumped on my. I just threw up my hands and walked away and haven't come back here until today. Lo and behold, everything seems to be back to normal (as I type). So, to get back in the blog swing, I'm just going to throw out some randomness.

IN ACTION--I didn't get out to see much in the way of live music this past year, but those acts that I did catch were well worth the effort:
Paul Oscher at the Bugle Boy--No way I could possibly miss seeing this legend. The first white boy to play in Muddy Waters' band admirably filling the harp shoes of Little Walter, James Cotton and Junior Wells. Had a wonderful chat with him pre-show on the patio and he regaled me with a few quick stories, some of which he repeated on stage. He did his one-man blues stuff, drawing on tunes from his mentors and many more of his own originals. Played guitar and piano with his harmonica in a homemade rack/with mike and produced the fattest deepest tone I've ever heard. Highlight of my year. I've mentioned the Bugle Boy before, which sits over in LaGrange, Tx. Premier listening room.

Billy Gibbons and The BFG's--My brother-in-law's sister scored tickets for her husband's birthday to see the ZZTOP main man and it rocked. It was the ZZman touring behind his solo album tinged with latin flavor. The stage was occupied with two drummers, percussionist, and B3 organ laying done the bass line. He did mention that he never had so many people behind him on stage. Of course, it doesn't matter what the groove is, Billy Gibbons nasty guitar licks kept it all where it belongs.

Johnny Nicholas at the Bugle Boy--Another one of those Ricky must not miss shows, and another legendary figure. Johnny had Scrappy Jud Newcomb (Austin cat, whose played with everyone) in tow on guitar and they preceded to kick serious butt. Johnny spent a number of years touring and recording with one of my harp heroes, Big Walter Horton. He told me to stay tuned, that Blind Pig has a bunch of his and Big Walter's stuff in the vault that he's negotiating to get back on the market.

Hash Brown at the Navasota Blues Fest--I've picked up a number of albums with Hash Brown playing harp and guitar throughout the years and looked forward to hearing him live. He did not disappoint and blew the reeds out of the harmonica. He brought an 'A' list of DFW musicians with him, including the great Mike Morgan on guitar.

Myself--I ventured out a few times myself to blow a few tunes with Rob Moorman and Company at a local coffeehouse. He keeps me on my toes with tunes anywhere from John Denver, Merle Haggard, Hank Williams, The Monkees, The Beatles, Bob Marley, Neil Diamond, you name it. I put my Lone Wolf Harp Train 10 through it's paces with an old Shure Bullet mike packed with a white label controlled reluctance element.

Local legend, Sam Murksi began a jam just over the hill from me during the summer and I blew quite a few nights with him. He bailed out on the patio gig as the temperature began to creep into the upper '90s. A couple of guys fronting a group called Brickyard Kane took over and I played a few rounds with them. They leaned towards stuff by Hootie and the Blowfish, Bob Seeger, 90s rock, and originals. They were fun, but pulled me out of my blues roots to much. I chained my Kalamazoo I and my Harp Train 10 together with the Lone Wolf Terminator and stuck the Lone Wolf Reverb pedal on the input of one or the other. Took both amps to keep up with these guys.

RECORDED MUSIC--I bought the least number of albums this year than ever. Not sure why, but here are some I really enjoy:
The Rolling Stones Blue and Lonesome--I rather like this album. The title is taken from a Little Walter song and they cover a number of his tunes, along with other blues chestnuts. A lot of harp players diss Mick Jagger's harp playing, but it's effective. He knows his way around the music with his harp, he's just not highly proficient at reproducing the tonal palette that blues harp fans expect. The band cooks on high octane, though.

Johnny Sansone The Lord is Waiting and the Devil is Too--This is my favorite grab. It's been out for a few years, but I didn't get around to picking it up until this one. I've been a fan of his since seeing a double bill with him and Fingers Taylor at the old Billy Blues in Houston. Didn't know who he was, but he blew me away. He's got it all. Fat harp, fat song writing, and fat vocals. This ain't your run-of-the-mill blues re-hash, he's got some really interesting stuff booming out here.

John Primer That Will Never Do--I've been listening to John Primer for years and have a lot of what he lays down. He's a master at recreating the Chi-town blues sound and covering the masters, which this CD does. He ain't gonna re-invent the wheel, but he will show you how it's supposed to be done. Got this one as much for Bill Lupkin's harp playing as I did for what Primer lays down and am not disappointed.

Trudy Lynn Everything Comes With A Price--This came by way of Steve Krase's Connor Ray Productions. This is the one that crashed my blog as I tried to review it. This is Old School Houston Blues at it's best, just like her Royal Oaks Blues Cafe.

Billy Gibbons and The BFG's Perfectamundo--Pretty interest twist on what Billy Gibbons is known for putting out with ZZTop. His signature guitar tones are unmistakable as he applies them to grooves with a latin boost. Love the blues standards that he gets all grungy with...Got Love If You Want It, Baby Please Don't Go and Roy Head's Treat Her Right.

Johnny Nicholas Fresh Air--Except for a Sleep John Estes and a Willie Dixon, this is a program of Nicholas originals and they are substantially well written and performed. Some of it has an old time feel with ragged and right acoustic slide, fiddle and accordion, and some of it as smooth as butter with a B3 organ trio feel going on, but it all melds together as something that smells like Texas, where JN has been holding court for years at a cafe on the hill.

ON WRITING--I'm working on getting my fourth novel, The Oaxacan Kid, out there sometime before the end of this year. Was hoping this some time ago, but 'tis the way things go. I've written a few short stories. Hope to have one accepted this year also.

Posted by Ricky Bush at 1:45 PM No comments: Links to this post

I wrote this review way back in April 2016 and then my blog got hacked and worked out on me. I still don't know what went awry, but I just sort of abandoned trying to straighten things out. Re-visited today and things seem to be working again. The review is unfinished, but Imma gonna publish it as is and just say--GET THIS ONE. Since then, I caught up with Trudy at the Navasota Blues Fest last August. She did kick butt, giving the Fest folks a taste of how it should be done. Anyway--

Way back in the day I ventured over to the Continental Club in Houston, Texas for an annual birthday bash honoring Big Walter Price, a legendary piano pounding bluesman (J Geils covered his Packed Fair and Square). Mucho many musicians throughout the city participated in the party. While standing there, bopping to the rockin' tones of Jerry Lightfoot (too early deceased now), I noticed glamorous lady decked out in her finest, alongside of me. She was bejeweled with fancy trinkets and sported long, long finger nails. She was bopping along with me. In short order, she was summoned to the stage and introduced as Trudy Lynn. I had certainly heard of her, but until that night had never seen her perform on stage. Perform didn't actually capture what she did. She dominated the stage and completely upset the house with a set of raucous, raunchy tunes that had the audience entranced in the spell of the Devil's music. As she flirted with the birthday boy (it was his 80 something celebration, I swear he took on the demeanor of a teenager. That moment in time will alway stick with me. 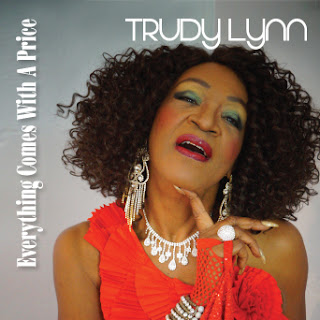 Trudy has been doing the do for quite some time now, but lots of folks have just recently 'discovered' her due to the release of Royal Oaks Blues Cafe in 2013 and the 2015 Everything Comes With A Price. The critical raves about the former led to appearances at the top blues festivals, where I'm sure she managed to upset the house at every turn.

Everything Comes With A Price picks up where Royal Oaks Blues Cafe left off with a package of songs from the way back when...when women blues singers ruled the roost and strutted the blues ike nobody's business, and self penned songs that fit the though as nails female blues protagonist. Many of the legendary blues singers, such as Alberta Adams, Lucille Bogan, and Ella Johnson told it like it is, or was, from that female perspective in regards to their male relationships. They were not shy about busting loose with a bit of raunch and bawdiness and sexual double entendres. Trudy dang sure knows where that bone is buried.

Trudy latches onto Alberta Adams' I'm Gonna Latch On with that earthy, husky voice and leaves no doubt as to what she's going to latch onto. Her own Fat Daddy with it's stop time hoochie kootchiness references the big man's bone more than a time or two.
Posted by Ricky Bush at 11:48 AM No comments: Links to this post