Chock full of it. That's what it is. Ronnie Shellist's 'til Then is chock full of superb blues harp being displayed in a variety of blues grooves. He lays out danged nice acoustic tone on the cautionary tales "One Day" and "Three Days", the jumpin' diddy swing of "Shoes", and Sonny Boy Williamson II's "Eyesight to the Blind" (the only cover other than Little Walter's Last Night. He nails both by the way.). He starts "Evil Woman" acoustic then switches to his mic for some mighty deep toned amped up grooves. Gerry Hundt, who has accompanied Nick Moss and has his own release on Moss' Blue Bella records, proves he's one of the leading practitioners of blues mandolin on "Shoes" (which is a showcase for his pickin') and the SBWII number. He does the deep blues acoustic guitar thing on "Three Days", as does Shellist. Even though my main thang is the deep, fat backed amped up stuff, Shellist sure wins me over with his acoustic tone, note choices and runs, especially on "Three Days". 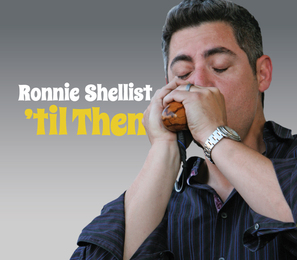 Oh, but Shellist does knock it out of the park with his techniques while cupping a microphone in his hand. As well he might. He's one of the most sought after instructors of the instrument and runs a website devoted to such instruction at http://www.harmonica123.com/ I witnessed just what sort of player he was at Sonny Boy Terry's Harmonica Fest and Clinic in Houston last summer. He floored me with his tone and expertise on the mouth harp and this is the CD release that does justice to what he exposed me to back then.

He runs through a rousing shuffle on the opener, "Knockin'", and sets the bar for what's to follow with his deep, deep bends, full on octave runs and all of what one expects from a blues harp professional. An epiphany for me was the guitar slinging of Jeremy Vasquez, who lights up a solo on this first tune. Throughout the disc, he and Hundt swap off leads and rhythms that'll provide plenty of pleasure for blues guitar fans from the minor keyed, "Bad News", the funky grooves of "Found You", the shufflin' gem "Trust Is Gone" and, well, the entire program. Shellist proves his third position metal on "Bad News" with some nice inventive runs and bottom end boom.

While Hundt does a Curtis Mayfield thang on "Evil Woman", Marquez picks up the torch and shakes the hell out the tune. Shellist goes particularly deep and fat once he switches from acoustic. They let it all hang out, though, on the instrumental, "Mook", with Hundt doing the boogie, while Marquez smokes the leads. Shellist's high end work is to die for, but when he and Marquez start bouncing lead notes off each other, then the party really gets crankin'.


The title tune, "'til Then", exemplifies Shellist's skills at turning a lyric or two...'til Then, my life is hanging by a thread, which is a driving tune held down pat by drummer, Bob Carter, and bassist, Todd Edmunds. Hundt lays down some effective Jimmy Vaughn style guitar swinging on this one.
I could drag this out and attempt to describe all the various harp styles and techniques (tongue slaps, octaves, flutters, double stops, deep bends, trills, warbles, note runs, etc...) that Shellist is superb at summoning at will, but things would get pretty darned repetitive. He certainly doesn't display his chops for the sake of displaying his chops, but he darn sure has the chops. Let's just say that this one is nirvana for blues harp afficionados and leave it at that. Get it at http://www.ronnieshellist.com/ 'nuff for now.

P.S.--FLASH for blues fans in Houston. Ronnie Shellist and the fabulous blues guitarist, Holland K. Smith will hold court at The Big Easy, 5731 Kirby Dr on May 25.
Posted by Ricky Bush at 12:22 PM

Throughout the disc, he and Hundt swap off leads and rhythms that'll provide plenty of pleasure for blues guitar fans from the minor keyed..

Thanks for sharing with us..

I saw Ronnie by accident one night at a club in Denver while I was on a business trip there. He's got it goin' on, fer sure!

Yeah, Mike, Ronnie's quite the toneful fellow. As good as anyone out there.