This is another one of those ancient reviews of mine that disappeared along with The Delta Snake website and I thought maybe had disappeared for good. Even though I had the foresight to print off my website submissions back in the day, it didn't mean that I was diligent as far as where I stuck those bits and pieces and it has taken me awhile to find this one back again.

I fell under the spell of Australian Ian Collard's harp tone as soon as I heard the first fat licks that he was slammin' down on his band's first CD called Collard Greens and Gravy. I had ordered both this 1999 release and the 2000 follow-up called More Gravy and was absolutely blown away by the talents of these Aussie blues guys. Even though I've bought literally hundreds of CDs since then, these two stay close to my stereo just to remind me of what Collard can get going with a harp in his mouth.

Soon after the release of these two gems, the trio ventured to Memphis and impressed the masses assembled for the International Blues Competition and claimed the 2nd place prize (I wasn't there, but I can't see anyone beating them). A few years later, they made their way back to the U.S. and flew into Houston and added to the substantial talent that gathered for one of Sonny Boy Terry's Harmonica Blowouts and I got a chance to hang with this harpmaster for a short time. My buddy, Stephen Schneider rounded up a few additional gigs for them, including an outstanding harmonica clinic conducted by Ian for our local HOOT (Harmonica Organization of Texas) chapter. He solidified my opinion of his skills during his stay and I found him to be a darned nice guy.
So, without further ado, here's the review from back in the day: 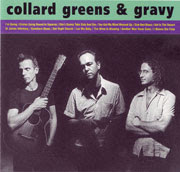 
Don't know for sure, but there must be a Delta somewhere in Australia that rivals the Mississippi to conjure up music with this level of conviction and emotion. This trio of musicians have the mojo in their souls and it literally oozes out of these two releases.

Collard Greens and Gravy get a pretty darn full sound and makes plenty of racket with just harmonica, guitar and drums laying out a pattern of music that is solidly built on the tradition of the Mississippi modal structure and Chicago blues blasting. They cover songs by R.L. Burnsides, Little Son Jackson, Skip James, Muddy Waters, Little Walter and add a heaping helping of original material. Led by frontman Ian Collard, they prove once more that blues is definitely a state of mind and not a state of geography. Collard is one of the most exciting harp blowers to come along in quite some time. He takes the harp and pulls just about all the tone that you can get out of every reed on the instrument before the songs on these two CDs are finished. He gives lessons in just how far the harp reeds can be bent up, down and maybe sideways, because he gets some sounds that elude most harpmen. Some of the tones will have the hair on back of the neck sit up. He has a way of keeping any amplified tone from getting boring and far from stale. It doesn't matter if he hits on licks that may have been applied a time or two throughout recorded blues harp history, because it is the way that he attacks the instrument that is so fascinating and tonally satisfying. Check out what he does to the original, The Wind Is Blowing, on the first disc, where he uses most of the entire harp to get his message across. Or where his resonant tone with tons of sustain plays the middle harp notes effectively on Circles Going Round (which contain some of his best lyrical ideas).

Well, I can go on forever about Collard's harp playing and it is the focus of CG&G's sound, but they are a band and guitarist James Bridges and drummer Anthony Shortte are just as much an important part of the sound machine. Bridges proves that he can pull out the blues grooves regardless of which way Collard wants to head. He attacks Little Walter's Hate To See You Go (1st CD) with some mighty fine bending that is sweet, helps propel Bo Diddley's Pretty Thing into the rhythmic grind called for (2nd CD) and gets some real, authentic, traditional slide worked up on quite a few numbers such as; She's Gonna To Take Sick And Die (1st CD), More Gravy (2nd Cd) and Out In The Desert (1st CD). Of course, without a bass carrying the bottom, he must use a pretty rhythmic style of playing to keep things kicking, which he does quite well with Shortte's able stick swinging, which is inventive and full of plenty of variety to drive this trio's sound. Many harpmen will profess to using the drummer's cadence to bounce their licks off of, hence a drummer many times is the blues harp's most important element in finding the right mojo. Shortte proves on every song that Collard has a well chosen man on the drum kit to propel the CG&G in the direction they aim and the target that they hit.

Collard has a fine voice chock full of emotional aspects needed to get the blues across with conviction. He gets a little affective on a song or two (such as emulating Skip James on Sick Bed Blues), but for the most part his vocals are as tonal as his harp playing is. He does the dark, brooding, pleading side of the human condition exceptionally well. (Back in the day, I was taken to task for my opinion of his Skip James affectation and the taskmaster was right. Collard does nail down the soul of the song with his vocal shift).

Hard to pick one CD over the other. They could have just as well been packaged as a double disc because they are so closely akin to each other and that tells me that this is what they are all about and plan to be about. Consider the latter release, More Gravy, as just a sequel that works was well as the first.

These guys do it up right and anyone that has pressed the Mississippi saxophone to their lips and tried to suck and blow tones from it must check out these two releases. They are keepers. Anyway--there it is as it was, but... 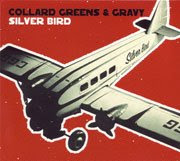 Since this was written the band has released a couple of additional CDs on the Black Magic Label. Silverbirdd (2004) builds on groove that the band established with the CDs reviewed here, but with tunes that are all Ian Collard originals except for three cuts. He also debuts his considerable skills as a guitarist and bounces ideas back and forth with Bridges. There are a few less harp driven numbers as a result, but as a result there is also a bit more variety thrown into the mix. A little Hill Country blues mixes and meshes with those Delta sounds that were highlighted before. It is tough today to get something original going with the blues, but Collard's writing, singing and blowing along with the CG&G groove certainly puts a nice spin on the genre. 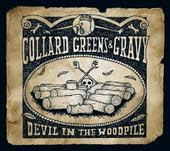 Many harp fans are going to quibble with the release of Devil In The Woodpile, that Collard has forsaken that deep, fat toned amplified harp tone for its prequel in capturing what CG&G was hinting at on the previous release. They are stomping out the sounds of the hypnotic, groove driven, Mississippi Hill Country Blues which is not known for harp tones in general, but Collard is slapping the harp down and making it fit along with his rhythm and slide guitar. So, yeah, there is a bit less harp going on, but he does get the wild thang going when he does get going. This is just Hill Country Blues according to Collard Greens and Gravy and they get it right.

They put out Live At The Northcote Social Club, that took me a bit of tracking down to get it in my hands, that captures the band in all their glory last April. Great stuff, there. I finally found it at www.newfoundfrequency.com. The band has a website at wwww.collardgreensandgravy.com and pages at www.myspace.com/collardgreensandgravy and www.myspace.com/iancollard. Go there to listen to their music and view videos and you won't be disappointed. Tell 'em Ricky sent you. Anyway--
Posted by Ricky Bush at 5:12 PM

you know, you retired teachers live off of a FAT retirement, a retirement that allows you to spend millions on new CD's. I'm a working stiff who is quickly running out of disposable income, thanks to all of your CD recommendations.
Joking aside, these cats rock. Keep up the great reviews, and I'll keep spending my kids college money. :)
DSmith Portland

Well, if you notice, quite a few of these reviews were written back in the day--when I was a working stiff. My disposable income has been hacked considerably, so the fresh off the rack reviews will be farther and fewer in between. I'll be singing the blues instead of writing about it pretty soon. Anyway--Thanks a bunch for you kind words.