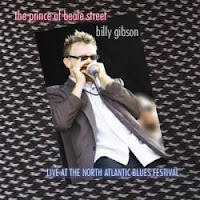 A few years back my family and I (including my Mom) decided to take a road trip to see my brother Rusty (he's known as Tom in Tennessee) and his wife Beth in Memphis. So, we planned out a trip during mine and the son John's Spring Break from school. I was really excited to visit Memphis and check out Beale Street.

Before leaving town, I thought that I would try and check out where Mississippi Blind Morris or Billy Gibson might be playing. They were the only two harp players that I was familiar with who might be around the town somewhere. I couldn't find an itinerary, but I did find an e-mail address for Billy and wrote him, introducing my self and the fact that I was visiting his fair city and wanted to catch his band somewhere. I knew Billy's playing from a group called the Junkyardmen and was impressed with him. He considerately e-mailed me back and told me of his Sunday night gigs at the Rum Boogie Club (which I'd heard about from my brother) and he said be sure and bring some harps--that we'd have fun. I replied that I'd try to catch up with him, but that I wasn't sure about packing harps to his gig. He wrote back and encouraged me to do so.

We blew into town and Rusty & Beth proceeded to show us a fine time. We travelled over to Beale on a Saturday evening and strolled a street packed with tourists and designed for tourists. At feeding time, the decision was to eat at their favorite steak place (name eludes my right now). It seemed to be everyone else's favorite
also, because the line spilled onto the sidewalk and down a ways. I asked about Rum
Boogie's food and they said it was great stuff too and I mentioned that Billy had told me he and his guitarist, David Bowen, had an acoustic duo spot on Saturdays and that maybe we should just eat there and listen to some good tunes and maybe meet Billy Gibson. Agreed by all and all were simply amazed at the talent of Dave & Billy. And all agreed (including myself) that it might not be wise to step up on stage with such a player.

Billy came over to our table during his break and introduced himself since I had a Texas A&M cap on my head, he figured that I was the Texan that had e-mailed him. He emphasized again to bring my harps out for the Sunday show to play a tune with his electric outfit. I look at him a little timidly and said something like, "Oh, now, I don't really know about doing that." He said, "Sure, it'll be fun." Yeah, right.

At my brother's house I did see that Blind Mississippi Morris was playing in what Beth said was an upscale club. We left the Rum Boogie to go and check him out. The club was upscale, with white table cloths and, after we were seated, a drink menu that was pretty extravagantly priced. Before we ordered anything, I asked about Blind Mississippi Morris and was told that, no, he wasn't playing that night--to the relief of us all.

My brother and I went back over to the Rum Boogie on Sunday night and the Billy Gibson Band was in mid-1st set and they were smokin', especially Billy's harp playing. The dinner crowd had most the tables near the stage, so we took a seat at the bar. After the first set, Billy and Dave found me and we talked harps and stuff. Dave and Billy were both from Mississippi and Dave talked about growing up around the blues, but that Billy knew more about the music overall than he did (I think that's a white boy thang).

Billy asked me if I'd brought out the A and the D harp that he said to pack and I said, "Yeah, but I have seriously reconsidered getting up there."

The Billy Gibson Band plays the funkiest type of blues that you're likely to ever hear and those of you who have heard them, know exactly what I'm talking about. It is owed in large part to the funky rhythm section of drummer Cedric Keel and bassist James Jackson. Brother Rusty had located us a table down close to the stage and we settled in for a real treat. The first set was just a preamble of what the band was going to kick out that night. Of course, I sat there with a bit of butterflies floating around and watching Billy kick it up a notch with each song didn't help matters.

Well, the set ended and actually to my relief, without me being called out to put up or shut up. I was willing to shut up at that point. Billy and Dave came over and joined us at our table with apologies for not calling me up. Billy said that he was giving Dave the high sign to call in the sub, which Dave said that he missed and they rolled straight into the set ender. Cedric joined us and was delighted to find out that I was a teacher. He said that he was taking course work towards a similar goal. I voiced my reluctance once more to joining them on stage and Cedric said, "Hey, we enjoy people sitting in with us. I'll be fun."

A few folks at adjoining tables had overheard the conversation and wanted to know, "What are you thinking? You're really considering following this guy?"

I said, "Yeah, they raise some kind of fools down in Texas, don't they. We just don't know any better."

Billy had told me to bring my A harp up with me. I had an A harp in one boot and a D harp in the other. I really didn't want to walk in with a case of harps in my hand. I slipped the A into my shirt pocket and watched Billy get the crowd pumped with his exquisite tone and at times, rapid fire delivery. I think I made a sign of the cross, praying that he wouldn't get me up after he spent the last three minutes of a song absolutely torching the crowd with solo to die for--I think my hair was being blown back by his sheer force and then I heard Dave say, "We have us a bluesman from Texas in the house and he's a school teacher, so you know he has the blues. Come on up here Rick." Oh, right, after that display?

Billy ask me whether I wanted to go through the vocal mic or his amp and I chose the amp and he left the stage, saying something about the mic being touchy. Dave said, "Let's do I've Got My Mojo Working in A." Okay, oops, wait a minute, I've got an A in my hand for the key of E. So, I had to dig down in my boot and fish for my D harp.

"Now, this is a real Texan that carries his harps in his boots," said Dave and off we went.

The mic was a bit touchy, so I had to listen for feedback, but I worked it okay. Dave threw me plenty of solo space and I knew that I wasn't going to be Billy Gibson, so I just did Ricky Bush and came off alright. The crowd gave me a standing ovation--I figured to support the fool up there and it was 3/4 into the last set and alcohol is a great equalizer when it comes to judging talent. Billy came back up and high fived me and said great job.Rusty had never heard me before, so he was duly impressed, as were the folks around us. As I headed to the restroom, the gal who ran the soundboard told me what a fine job that I had done and that there were very few people who had the guts to get up on stage after Billy Gibson. Whether it was guts or foolishness, I got to play on Beale Street.

So, it was fun! They were right and it'll aways stick out as one of the highlights of my harmonica playing. The real treat was meeting and hearing Billy and his fine band. I can't believe that I haven't posted up about this trip. Rusty and Beth moved away from Memphis and back to Texas, but now they are back in Memphis, so another road trip is in order.

Billy has several CDs available. I think Live at the Rumboogie really captures the band well, but the studio release of The Billy Gibson Band is fine also.I think the newest is called Southern Livin' and is especially funky. If you want a great visual representation of what these guys put down, then check out The Prince of Beale Street Billy Gibson--Live At The North Atlantic Blues Festival (pictured above). They really stretch out and get the grooves happening on it. Don't pass up his work as a young pup with the Junkyardmen. I don't know if hard copy CDs are still out there, but I do believe that iTunes has it available. Check CDbaby for the CDs or Amazon. Anyway--'nuff for now.
Posted by Ricky Bush at 3:25 PM

Thanks for following my blog! I hope you like what you find there. I have to say I was really excited to find yours and will read it with enthusiasm. It has been hard to find good blogs on specified music other than that of what's on MTV. Keep up the great blogging and don't hate me for getting a degree in English, while having so many writing errors in my blog. I usually write when the day is very very over with.

Nice blog back to you. I just read you latest gig post. Tried to comment but couldn't get word verification to load--it just says loading...and never does. Hey and don't sweat writing errors--this is suppose to be fun! I go back and find plenty in what I've posted up--sometimes I correct them, but what the hey if I don't. Same with ya--keep it up. Anyway--