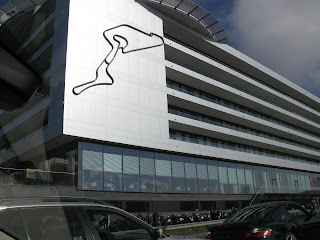 What a Labor Day Weekend--so I just have to blog about it. My crazy brother-in-law, George, called me Wednesday night of last week and said, "Hey, Rick, I've got tickets to fly to Amsterdam and then we'll drive over to the World Superbike races in Germany. Do you want to go?"

"When are you flying over there, George?," I asked.

Long story short--I agreed and off we flew Continental Business First Class for a mighty fine price for a round trip. Which was the deal that he couldn't pass up, especially since some of the best motorcycle riders in the world would be racing within driving distance.

We arrived in Amsterdam at 8:30 on Friday morning, rented a car, and headed out to the Zuiderzee dams. Amazing feat of human environment interacton out there--and the 50 mph+ winds whipped at us pretty darn good once we embarked from the rental Volvo. We took our pictures and enjoyed a rest at a unique snack bar on the dam and headed back to Amsterdam. 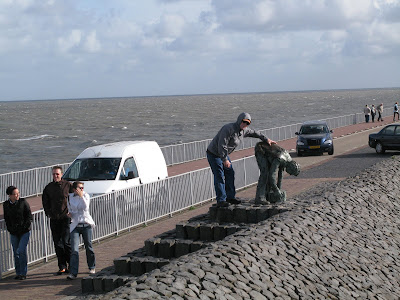 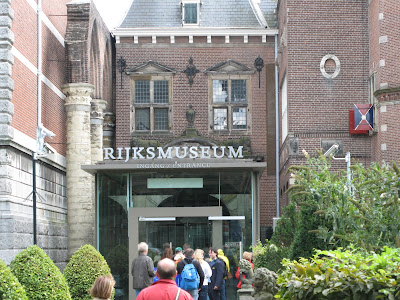 After checking into our downtown hotel, we walked down to the Rijks and the Van Gogh museums and snapped some pictures around the downtown area. Way too much jet lag convinced us to forgo waiting in line for a museum ticket and then end up wandering around the halls like zombies on drugs. We headed back to the hotel at around 3 p.m. and soundly sacked out until 8:30, then caught a cab in a torrential monsoon for the Dam Square shopping district--where you can literally buy anything you want. Yep, anything. So, we sloshed around with umbrellas to window shop in the world famous Red Light Distict--which has to be the most unique city blocks on the planet. We eventually plopped ourselves down under the canopy of a restaurant and watched the world go by. Never seen that many people trekking around in a city in the rain.

What really struck me about Amsterdam was just how immaculately clean the city is. That goes for the Netherlands in general. The countryside is all picture postcard and the roadsides aren't used for garbage receptacles. The Dutch are just neat. 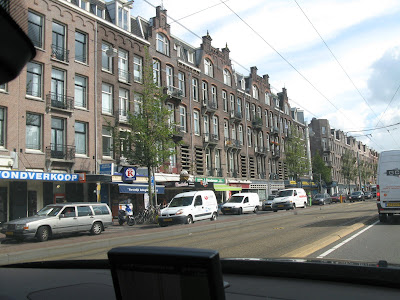 We hopped in our Volvo on Saturday for a four hour trip to the Nurbergring race track to watch the practice runs and the bikes compete for pole positions. I don't know much about motorcycle racing, but George spent many a weekend racing for real in his younger days and knows the sport inside out and also many world class riders. The one rider that he was most excited about was Ben Spies from Longview, Texas, who is tearing up the World Super Bike circuit at age 24. I thought that it was fabulous that we had a Texan in the fight. George explained that Spies had the disadvantage of never racing this course, when most of the European riders had many times. We were quite bummed out watching Spies total his bike out on one of the curves as it flipped and flopped off the track. Unhurt and undeterred, he rode the course well enough on his back-up Yamaha to gain a starting position on the second row. 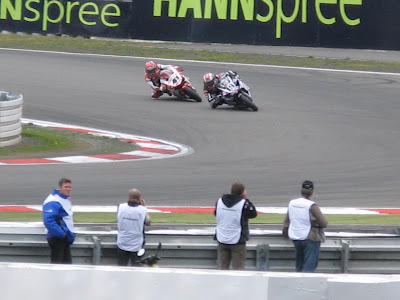 At the end of the day, we programmed our GPS (which we named Ingrid) to get us to our hotel--somewhere in Germany. George had no clue where, so Ingrid took us on the most scenic route she could find, winding through very beautiful German mountains and quaint villages. We ended our trip in the city of Cochem, which we could see right off was a popular tourist resort on the Mosul River. It looked exactly like you picture a German town to look or want it to look--complete with a 1000 year old castle overlooking the inhabitants. 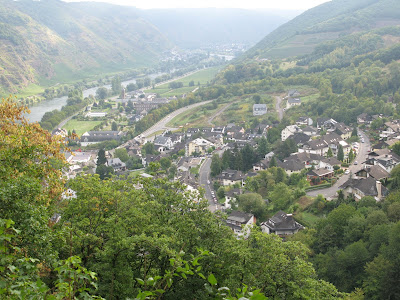 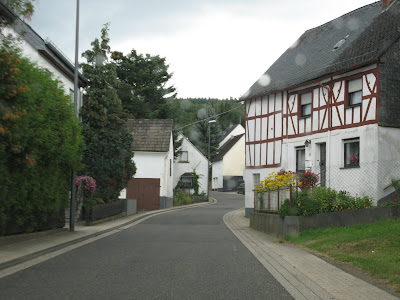 After Ingrid guided us to our hotel, it didn't take us long to discover that George had booked us into a romantic getaway spot. While checking in, George did ask about the room having two beds. The female desk clerk said that she was sure it did, but that she would take us to the room and make sure. I'm pretty certain that she wanted to discreetly hide the heart that was pasted to the door with George's name on it. There were two beds--singles--pushed together. Well, regardless, this was a great place, with a great view. 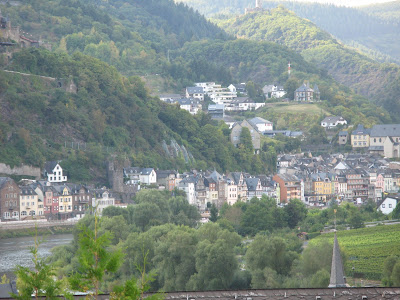 After breakfast on Sunday, we headed back to the races. Two Super Bike races are run at every venue on the circuit; so as George said, "You get more bang for your buck". In between the 1000cc Super Bikes are the 600cc races. Our spot on the track was at the first curve, which was hairpin and took more than a few racers out of the race. It was the curve immediately following that one that got the first race of to a very bad start. Several bikes flew off the curve, one caught fire, and one rider had his neck run over by a bike. A restart was necessary and Ben Spies found himself running fifth after the first set of curves. 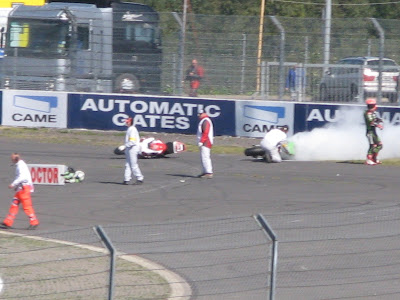 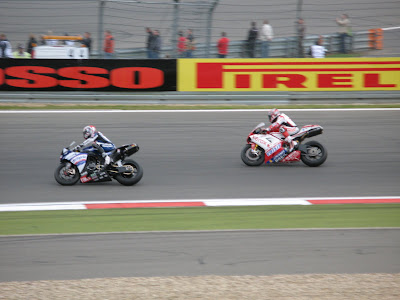 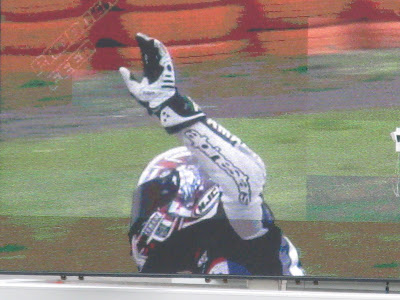 It didn't take the Texan long to begin the process of picking the riders off in front of him. It was exciting watching his world class work. By the half way point he had worked himself up to second place and then we watched him overtake the Japanese rider,Nuriyuki Haga, for first at the curves within our view with two laps to go. He never relinquished the lead and beat the daylights out of the best riders in the world. It was GREAT! And there were a whole host of Germans behind us that loved the Texan and cheered him at every turn.

Spies started off the second race bogged down in ninth position and George figured that he was sunk. But, the boy from the Lone Star state methodically worked his way through the pack until he was riding the back tire of the first place rider, Britain's Jonathan Rea. He tried his best to take him on several turns, but his opponent fought him off. Spies took second. Not a bad day at all for the young man. It also propelled him to the lead in the World Super Bike circuit points. Whoop! Go to Spies' website and check the guy out--he's for real.

We left the race track at around 5 pm and let Ingrid do her thing back to Amsterdam and George did his thing also--which was to see how fast our Volvo would do on the Autobahn. 143.6 mph is what he calculated the kilometers per hour to mean. So, we flew back without wings--just on a wing and a prayer on my part. Of course, he didn't keep it topped out at that speed, but we be cruising most of the time.

We made once last round viewing the Amsterdam sights that evening and hung out on the sidewalk of a bar and George bribed the waiter to have them keep playing blues music over their programmed sound system. Mighty whirlwind trip and one that I'll always remember. Anyway--'nuff or now. I'm still jet lagged.
Posted by Ricky Bush at 1:24 PM

I recently came accross your blog and have been reading along. I thought I would leave my first comment. I dont know what to say except that I have enjoyed reading. Nice blog. I will keep visiting this blog very often.

Why, thank you very much, Sarah. It is always nice to hear from people who find my blog has some interest to them.