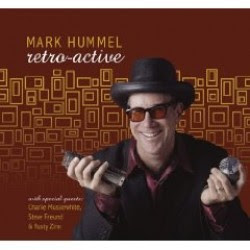 One of my go to guys to hear great blues harp tone has always been Mark Hummel. He's one of those cats like Rod Piazza, Kim Wilson, Rick Estrin,RJ Mischo, (and a few others that are on the tip of my tongue, but not at the tip of my typing fingers)who fell under the spell of the sound of the blues harp as teenagers and devoted most of their waking hours (and hours that they shouldn't have been awake) picking out licks by the masters. Now that they've all entering different stages of middle age, they have become the masters that they set out to emulate back in the day. In other words, he and they pretty much have it down pat.

Hummel has superbly showcased his peers on the instruments by releasing a series of his Blues Harmonica Blowouts, dating back to 1993. In between those great discs, he's put out new releases and combed his audio (and in some cases video) archives for stuff that he's never released. Retro-Active combines some of both. He dips back as far as 1995 for a couple of the cuts and includes sessions from 2000, 2005, 2006,and 2009 employing 18 different musicians. Some, such as Charlie Musselwhite, appear on a single tune (Charlie's playing his acoustic guitar and not harp, by the way).

One might think that combining a disc from a myriad of sessions and musicians might prove a little discombobulating, but they would be mistaken. The reason being that there's nary a musician on the disc not steeped in as much blues lore as Mark Hummel. They know what he wants and they deliver. Doesn't hurt that one of my favorite blues guitarists, Rusty Zinn, glues things down on 12 of the 15 cuts, beginning with Funky Way on which he demonstrates his expertise for laying back and playing nothing but rhythm guitar--no lead guitar at all on this tune. Chris Burns' Booker T type organ swirls drive this tune with backing vocal chorus' that echo Hummel's lyrics. The tune exemplifies Zinn's versatility and Hummel's penchant for mixing the vibe up with a tune that's definitely a bit more funky r&b than blues. Good vocal job from him. I wouldn't not have recognized this as being Mark Hummel if it had just popped up on satellite radio. He plays no harp until just a little after the 3 minute mark, but then he rides the song on home with fatback notes and oozing tone.

From there, the disc swings through West Coast Jump on tunes such as Never No More, with a horn section supplied by Johnny Bones (sax) and Lech Wierzynski (trumpet), Little Walter's classic Roller Coaster (which he's covered before), and the deep Delta Mud of the acoustic Can't Be Successful, with the aforementioned Musselwhite picking cotton on the guitar. Hummel can always be counted on to throw down a Rhumba, such as on Highway Rhumba, and adding some tasty third position minor keyed stuff with Steve Freund picking out some Peter Green sort of licks on Before The Beginning. He even shares guitar credits with my new favorite guitar guru, Kid Anderson, (who, by the way, mixed and matched this cd at his Greaseland Studios) on the Jimmy Reed groove of My Baby's So Sweet. There are no song credit notes, so I have little to go on as far as authorship to the songs here. I do love what he does with I'm Shorty, whoever wrote it.

So, what you have here is basically Mark Hummel doing what he's best at doing and doing it well. I could describe the blow by blow lick action, but why? If you've heard Mark Hummel, then you know to expect top notch, quality harp blowing. If you haven't then Retro-Active is a darned good place to start. 'Nuff for now.
Posted by Ricky Bush at 10:37 AM