Great Music for Great Cause

Gonna be some great music supporting a great cause at Dan Electro's Guitar Bar this Sunday (3/27/11). James "The Blues Hound" Nagel is pitching his annual "wang dang doodle" fundraiser for the best radio station in Houston--KPFT 90.1. Doors open for the SPRING HOWL at 1pm and the H-Town Jukes kick the proceedings off at 2pm. 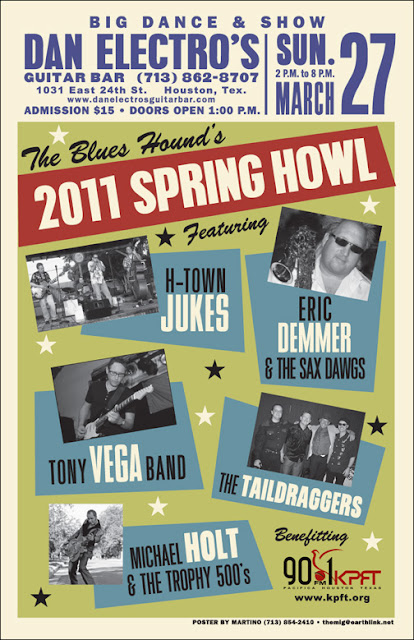 The Blues Hound has been keeping the blues alive in Houston (and beyond) for at least as long as I've been listening to the blues in Houston. I can't really recall a blues show that I've attended and not seen James Nagel introducing the band, snapping photos, assisting the best blues society in the state, dancing with his wife and just generally soaking up the atmosphere. I've even spotted him giving the folks over in Navasota a hand with their Navasota Blues Festival honoring Mance Lipscomp. He runs a fantastic calendar of blues music, detailing where the blues is being played and will be played around the Houston area. The calendar can be found at http://www.kpft.org/ and at http://www.houstonbluessociety.org/
Posted by Ricky Bush at 8:46 AM