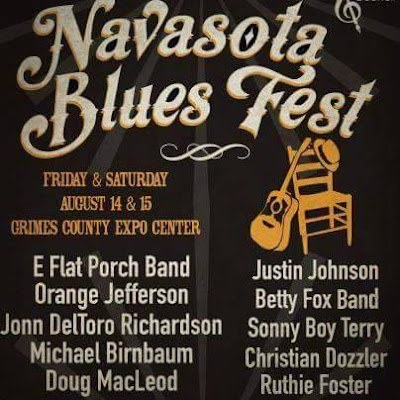 I've written quite a bit about the Navasota Blues Festival since I began this blog. I told tales about writing musician bios for the programs back in the early days of the fest and just how special this event has always been. This one, the 20th Anniversary edition, should prove to be exceptionally special with the return of the stupendously talented Ruthie Foster.

Ruthie was there in the beginning years of the festival. It never mattered who preceded her on the stage, she ALWAYS came out and totally upset the house. Anyone who witnessed a Ruthie Foster set knew that they were in the presence of greatness. Her star turn had yet to shine, but few doubted that it would. I've heard very, very few match her vocal talents. She supported the festival, not only with her musical talents, but she also rolled up her sleeves by serving on the board of directors. She helped the festival get off the ground as the festival helped jump start her career. Since those early days, she has risen to international acclaim in not only the blues community, but also throughout the music industry. Her talents swept her around the world and took her far from the stage honoring Mance Lipscomb in Navasota, Texas, BUT she's back and August 15 should prove to be one heck of a homecoming. Trust me. Don't miss it.

It's a homecoming of sorts for another artist who was there in the beginning. After an absence of a number of years, Sonny Boy Terry will be returning with what he feels is one of his best bands. Which is saying a lot. During those early years of the festival he was being mentored by Houston blues legends, such as Joe "Guitar" Hughes, Uncle John Turner (Johnny Winter drummer) and Johnny Copeland. Since then, he's become Houston Blues and no one blows a blues harp better than he can. I'd say that he will definitely rock the house.

A highlight for me from the 2014 shows was Doug MacLeod. He's returning to play some of the best damned acoustic blues one could possibly ask to hear. He's from the old school and has tales to tell about playing with George "Harmonica" Smith and Pee Wee Crayton back in his formative years. The CD he had in tow last year, Exactly Like This, won every blues award out there over the past year. Like Sonny Boy, he learned from the old masters.

Someone that I'm particularly looking forward to seeing is Jonn DelToro Richardson. I reviewed the CD, Time Slips On By, that teamed him with blues mandolin whiz, Rich DelGrosso awhile back. You can find it here if you look around. Jonn has been one of my favorite blues guitarist since way back in the day when I attended a jam he ran at the Cactus Moon in Humble. He floored me then and he astounds me now. He can do the do and I know that he'll knock it out of the park Friday night.

Christian Dozzler's another one. He's become quite a blue institution in the DFW area since moving from his native Austria. He's played with the who's who in that area for years. Saw him play keyboards opening for Little Charlie and the Nights years ago, but based on an old CD I have of his, I know he has one helluva tone on the blues harp. Should grease the wheels well for Ruthie Foster's set.

Michael Birnbaum has opened the festival with guitar lessons in Mance's style for many, many years now and always plays a set of the master's music. After meeting Mance at the legendary Ash Grove back in the mid-'60s, he's been one of Mance's leading proponents. He travels from California every year to show his respect and share his talents, many times with his talented daughter in tow. He has Mance's style down pat. Better than pat, actually.

I remember when the late blues musicologist, Tary Owens, brought Orange Jefferson down from Austin and introduced him to the festival crowd a long time back. Owens felt that he was one of the few that still had some authentic blues to display with both his vocals, harmonica and saxophone. He never disappoints the crowd. Not sure if he's missed being booked since then.

I missed the E Flat Porch Band and Justin Johnson's cigar box blues last year, but heard enough about them that I'm planning to make an early appearance to catch them. Folks tell me that Johnson's cigar box workshop was well worth it and it takes place pre-fest at the world renown Blues Alley on Friday.

Can't say much about the Betty Fox Band, because I simply don't know much about them. I'll have to catch up with them. I didn't plan on writing up this long of a post. Mainly planned to make sure my readers knew the festival was coming up and that Ruthie was onboard and just give out for the link Navasota Blues Fest and let everyone get the official stuff. Anyway--'Nuff for now.
Posted by Ricky Bush at 7:36 PM