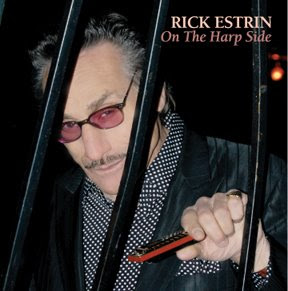 Rick Estrin
On The Harp Side

People have been asking me for years to do a more low-down, harmonica-focused CD...here it is.--Rick Estrin

Amen, Rick. I've been waiting for such myself. Don't get me wrong, I love what Little Charlie and the Nightcats have been putting down for the past many moons. The mix of Charlie Baty's swinging, stinging guitar slinging and Estrin's hepcat singing and wry, tongue-in-cheek songwriting cut a definitive path that set the band apart from every other blues band. When Estrin put his harp to mouth, though, magic happened (for me anyway) and I always wished for a bit more of it with each CD release. Of course the band was not called Rick Estrin and the Nightcats and some may argue that more variety was had by not including harp on each cut. This CD negates all that.

The Nightcats are Rick Estrin's band now that Charlie has opted for a sabbatical of some sort. Seems that they re-ignite for a few choice concert dates, but it is officially Rick Estrin and the Nightcats doing the do and this CD is documented proof that a harpcentric album can be way far from stale with a whale of a lot of variety. I'm guessing here, but since there is nothing in the way of a label name on this offering and very little in the way of liner notes, that this recording is sold at their gigs until Alligator (I'm guessing again) decides what to do with 'em.

Ain't no re-inventing the wheel here. What you get is what we've always gotten with Rick Estrin's mouth--singing and sucking and wearing his influences on his sleeve or mustache or whatever. I've only listened to the release a couple of times, but that's all it took me to say, "Yeah, man!" and just enjoy the hell out of it. He does kicking instrumentals like the opening track, Headin' Out, which is his nod to Little Walter's Juke, Off the Wall, etc...Like traditional Chicago blues harp tonal technique done right? He lays it all out on this one and then follows it with Walter's Tell Me Mama.

Fans of the Nightcats know that Estrin pulls off some great Sonny Boy Williamson II tones that are so eerily close to the master that suggests a reincarnation could be a possibility. He covers several of SBW II's tunes, including one of my favorites--Fattening Frogs For Snakes. I don't know of anyone who comes as close to this harp sound as Estrin. SBW II proved that the blues can certainly stir a little humor into heartbreak, a style that had obvious effect on Estrin's lyrical commentaries.

He doesn't leave his other main man, Sonny Boy Williamson I (John Lee Williamson hanging by covering his Tell Me Baby and since it follows Fattening Frogs For Snakes, it offers up how different the two were in their tonal presentation and how proficient Estrin is at pulling off sounding so authentic.

If that's not enough variety, he breaks out the chromatic to crank one of his signature tunes, Big and Fat, into groove city while lauding the assets of the large and lovely. Nothing fancy here, just proving that he knows how to fit the instrument into a driving blues tune. He does get fancy with the chromatic on the jazz chestnut, Harlem Nocturne. I'd challenge anyone to point out a better played version than what the Nightcats get up on here.

With a generous helping of 17 cuts, that include the aforementioned, 6 originals and covers of Muddy Waters, Big Boy Spires and Eddie Burns and all with a heaping, helping dose of Rick Estrin's variety of harp skills on display, harp fans have a reason to rejoice. Estrin's Nightcats have Kid Andersen filling Little Charlie's esteemed shoes. He's been the go to guy out on the West Coast for awhile and was on Charlie Musselwhite's tour dates and recordings for the past year, put out one of his own critically acclaimed CDs and made numerous studio appearances for a number of artists. He knows his blues guitar and can also get a jazzy touch or two going on. On this release he has a partner in crime with Rusty Zinn (see an earlier blog post) and we know what he brings to the table. J Hansen (drums) and Lorenzo Farrell (bass) fill out the rest of the band, with Ronnie James Webber (past Nightcat) playing bass on about half the cuts on this album. Bob Welsh does the keyboarding here. Haven't listened to the CD critically enough to analyze the musical detail that everyone is putting down here and don't intend to--just think the Nightcats, without Little Charlie, but with lots of harp by one of the modern masters of the instrument.

Again, I don't know any label details. If all you care about is amped up, gritty Chicago harp, then this may disappoint you a bit--what there is of it, can't be beat, though. If you enjoy both SBWs along with your Little Walter, then you've gotta have this one. I got my copy from Charlie Lange over at www.bluebeatmusic.com Check out Estrin's myspace page. Anyway--
Posted by Ricky Bush at 11:41 AM

Great blog you have here! I just had to buy this CD after reading your review. Thank you for help spreading the power of the blues!

Thanks for compliment and dropping by the blog. If you're a blues harp kind of guy, then you'll love this one.

Oh, yeah, there just ain't much that Estrin can't do with a harp in his mouth. I think even the pros sat slack jaw in amazement when he tears into it at a live gig. One of my favorite harp dudes.

listening to it now-it's a good 'un!