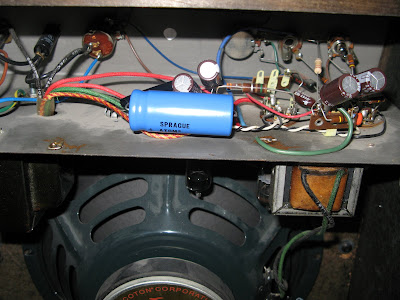 Sucking on a few blues notes, through my Kalamazoo 1 just now, reminded me that I jumped on another one of those Stephen Schneider suggested modifications about a month or so ago and figured I would go and post it up for those interested and while I was thinking about it. The Kalamazoo acquisition is detailed in one of my older posts, so I won't repeat just how much I love it as a small harp amp (that's way louder than it looks).

Stephen cannot keep his hands off his myriad of amplifiers and is continually tweaking them to see how much better he can make his already great harp amps sound. The majority of his mad science experiments work and his amps just become more beastly. When they don't work to his satisfaction, he just undoes what he did and no harm is done. When they do work, he shares his results and convinces me to try it out.

I've balked at his suggestions for the Kalamazoo 1 because it just didn't seem to need anything else--except maybe a bit more thump from the bass frequency, but I figured that just was the character of the small, low power amplifiers. I did notice that his Harmony amplifier from the same family size (single EL84 power tube) did produce better lows. His suggestion was to add a bit more filtering value to the first stage power filter capacitor.

So, reluctantly (and why, I don't know--because his mods always work for me), I added a Sprague 20mfd/500v capacitor to the two 10mfd that were already there--for a total of 40mfd first stage filtering. I knew when I ordered it that the Sprague was gonna be a fat dude (and it was as you can see in the pix), but I figured that I had plenty of room for its diameter (which there was). The amp had a cap job before I bought it, so I didn't replace any of the caps.

The results were immediately obvious. The Kalamazoo 1 sounded as sweet as before (or as nasty, depending on how you perceive such), but the bass blossomed and tightened and those low frequencies thumped out significantly better. It may be my imagination, but I'm thinking that the amp is putting out a smidge more volume than before. My ears seemed to ring a bit after a substantial test run and I can't remember the Kalamazoo generating such before.

So, another successful Schneider special. Of course, he said good, now you might as well try this next....Anyway.

P.S--I updated the mod info on 9/30/08. I erroneously wrote that I swapped the caps out for a 20mfd capacitor--which simply would have replaced two 10mfd caps with one 20mfd cap, resulting in the same cap values. Didn't proof read and Professor Schneider caught my error. Thanks again, my friend!
Posted by Ricky Bush at 10:21 AM

And another thing . . . especially when they're as big as that, tacking the new cap to the chassis with some hot glue is a good idea. Keeps strain off the solder joints and damps out vibration. I'd probably put some under the righthand end of the Atom, lift the cap up slightly and ooze it under there but keep it off those wires, let the cap down into it. It'll come out readily enough when replacement time arrives. I don't like to see messy blobs of hot glue all over the place, but strategically placed amounts can help reliability.

I've seen that recommended and have been meaning to get on it, but haven't. Thanks for the reminder and all you do. Anyway--