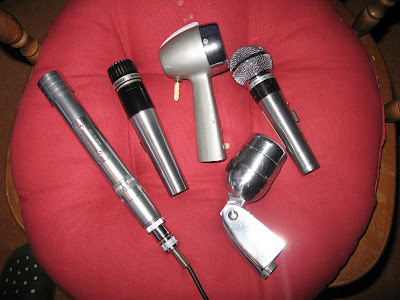 Anyone who plays amplified blues harmonica has been down some of the same roads that I've mentioned on this blog. I'd say that most of us went looking for THE amplifier to give us THE tone way before we were ready to uphold our end of the bargain by producing much of that with simply the sound that we made with the harmonica pressed to our lips. But, no, we knew we would sound much better by cupping up a microphone and sucking the notes through a tube amp. Fact is, I didn't sound much better, but just sounded like a louder me--which was a far cry from the gnarly bluesman I was attempting to sound like. Way down the road, I eventually found that matching my much improved acoustic tone, with the right amp and the right microphone came a lot closer to the sound that floated around in my head. I did say closer.

Back in the day, even though I knew MY tone wasn't there yet, I was hell bent to get my amplified act together. I mentioned that my first amplifier was far from being harp friendly, but little did I have a clue at the time. I just knew that I needed a microphone to go with it. I had been reading up on amps and mics and stuff, written by folks like Pete Sheridan and Tom Ellis. They were very knowledgeable and gave good descriptions of what to expect with various mic configurations and in Sheridan's case, which mics were used by our heroes such as James Cotton, Little Walter or Big Walter. I found that most of the examples discussed, and that were on the market, were out of my price range.

So, I experienced a bit of excitement when I stumbled across a box of microphones in a storeroom at the high school where I taught. My principal agreed with me when I told him that maybe they should go home with me, since no one had a use for them. The mics, pictured above, are from left to right: Shure 535, Shure 545SD, Turner 254, Shure 565SD and at the bottom, an Electro Voice 630. I was most excited by the presence of the 545, a type maybe used by Little Walter and similar to a model used by Paul Butterfield. I had also read that Turner and Electro Voice mics had their places in blues harp history. None of the microphones were useful out of the box (hah!). They had no cords, except for the Turner which was a desktop, push button model that certainly wouldn't plug into my amp. The 535 had a piece of a frayed cord attached, but that was that. So, I knew that I had a little work to do that I knew nothing about.

I began my butchery by attacking the Turner desktop and cutting the base off of it and attaching the leads of a mic cord to it and by golly it worked. I could blow some notes and hear it blast out through my amplifier. I knew enough at this point to know that the crystal element that the mic had in it was a type suited to harp playing. It still sounded like Ricky Bush and not Little Walter, but gosh it was loud and gave me my first exposure to FEEDBACK (which is another of those shared experiences that us amplified guys deal with controlling--another story, there). I packed it up with my amp and hauled it down to my first jam and blew the blues, dude. Jam leaders, Neil Kulhanek, Robert Zientek and Sam Murski encouraged me all night, but I knew that I had a ways to go.

After being successful with getting something out of the Turner, I turned my attention to the Electro Voice 630. Try as I might, though, I couldn't get it to reproduce a sound. I pretty much boogered it up fairly well in my quest to get it working and gave up and never got back to it. Might try to resurrect it someday.

I took the Shure 545SD and 535 to Tom's Sales and Service, which was operated at the time by Tom Brinkmeyer. He was from the old school and was one of the only techs in town who could work on tube type amplifiers and such. He ordered a Shure cord that would work on the 545 & 565 and he hard wired a cord to the 535. The 535 turned out to be a super hot, high impedance mic that proved to be way touchy for harp playing. Both the 545 and 535 were wired to low impedance, but I had bought an impedance matching transformer and cord to work around that. The 545 & 565 sonically blasted the Turner away. Only then did I really just how really weak the Turner crystal element was in comparison. I started using the 545 at jams and sit-ins, but it was a just not gritty sounding enough for me. It did become my main axe, though. Since these early days, I discovered how to change the impedance in both those microphones to high and the 545 will overdrive a tube amp very well. Not with the same tonal palette of an Astatic MC151 element or a Shure Controlled Reluctance/Magnetic cartridge, but with its own flavorful qualities. It is harder to seal off in a cup with a harp, but Stephen Schneider passed along the idea of using a bit of foamed pipe insulation around the mic and it does work. The 565 is okay, but does have quite the same magic as the 545 does.

Since I still didn't really have my tonal chops together and I hadn't discovered how to make the 545 better, I'll have to get around to the Crystal Balls story next time out. Anyway--
Posted by Ricky Bush at 8:44 AM