The Real and The Retro 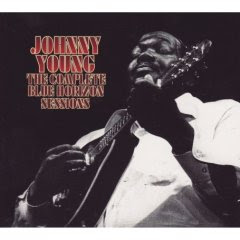 Here's a quickie before I head off to China for a amazing and amazingly cheap trip. More 'bout that later.

I spied the release of Johnny Young's The Complete Blue Horizon Sessions on Blue Beat's website and since I knew that Paul Oscher was aboard and that it would be chock full of deep Chicago blues, I decided that I should add it to what I've got. I have some of Johnny Young's stuff on compilations and his Testament records release, so I figured that I could expect some excellent singing and mandolin blues and that's exactly what I got.

Let me say here, that historical reissues such as these HAVE to be purchased in CD form for the extensive liner notes that offer so much more value to the recording than just downloading the music from iTunes or such. This reissue comes from Mike Vernon's Blue Horizon vaults and basically recaptures the magic from Johnny Young's originally titled Fat Mandolin. It is replete with false starts, alternate takes and previously unissued releases. The notes include a fascinating history of the mandolin in blues and popular music. Great reading, and the history of this session is just as interesting. Not gonna re-cap it right now.

Okay, how can you go wrong with Johnny Young leading a band that consists of Otis Spann (piano), Sammy Lawhorn (bass guitar/second guitar), S.P. Leary (drums) and Paul Oscher (harmonica)? Hard to do, if Chicago blues is your thang. Spann's playing is particularly inspired (I believe that he was tapped to record his own Blue Horizon stuff very shortly afterwards). Young's singing is powerful and if you haven't heard how efffective he can stick a mandolin into the blues, then you owe it to yourself to get it just for that reason. This is Chicago style ensemble blues playing, much the same as Muddy and his bands created (most of these cats were in his band). Oscher weaves his harp in and out of the grooves and leans on it when his number is called. He comes up with some good sideman ideas. Not really showcase stuff, but just following the leader. I love this release. That's it--(said it'd be short). 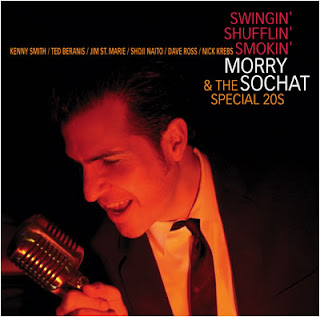 When I was looking around for the Young disc, I ran across a release by the Special 20s. I think I mentioned in an earlier post that I had checked it out based on the fact that Special 20 is the name of a Hohner harmonica and figured that someone played the blues harp in the band. That someone is Morry Sochat and it seems that he moved from Texas to Chicago in the 1990s and took lessons with the modern master Joe Filisko. It also seems that he has been on the Chicago scene since then and has played with most of the blues movers and shakers in that town. He certainly has gathered together some fine musicians on this release with Shoji Naito (guitar), Jim St. Marie (guitar), Ted Beranis (bass), Dave Ross (piano), Kenny Smith (Willie's boy on drums)and Nick Krebs who adds harmonica touches to five of the tunes. Both he and Sochat are fairly efficient blues harp guys and get some good tonal variety pumping, especially on classic covers such as Standing Around Crying (Krebs), Young Fashioned Ways (Krebs), Train Kept A-Rollin' (Sochat), Can't Hold Out Much Longer (Sochat) or George Smith's Rocking (Sochat). Sochat's originals don't stray far from the tree and in some cases gives direct credit to his mentors, such as on the opener 1955, which is a Chicago blues name dropper of a tune recalling those of yesteryear.

These guys are good, but there's not much that separates them from the crowded field of retro-active blues bands out there. That's okay with me because I like what they are doing and after checking out their website, it seems that they ply their trade mostly around Chicago. To me, that's great to know that anyone that drops into the city can see the younger set carrying on the tradition. Anyway--I'm gone.
Posted by Ricky Bush at 11:20 AM

Johnny Young was also a good guitar player. He was an excellent singer. He was a solid practitioner of the blues in Chicago. Anything by Johnny Young is worth owning.

If you dig Otis Spann, check out the stuff he recorded for the Candid label with Robert Jr Lockwood and St Louis Jimmy, it's beautiful.