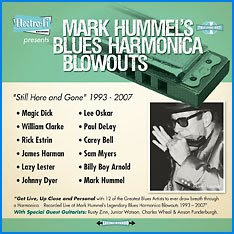 I've always enjoyed listening to Mark Hummel's Blues Harmonica Blowout releases. His gatherings of some of the best harmonica players in the land at Yoshi's in Oakland and Moe's Alley in Santa Cruz have been legendary events and Hummel has done his best to share those live events with those of us that couldn't be there and Mountain Top Productions released his first three double discs of some really great live blues harmonica performances.

The fourth example of these shows has been put out by Electo-Fi Records, who has released Hummel's last three solo recordings. These cuts represent recordings that didn't make it onto the previous collections and stemmed from performances dating from 1993-2007. Actually, William Clarke's contributions are the only one's dating back to 1993 and Rusty Zinn is on board as the guitarist of note. Along with Clarke, several of the harp stars on this release are no longer with us, so that makes this release a document of some of their last live recordings. Paul DeLay, Carey Bell, and Sam Myers have all passed on to harp heaven and are all in fine form in their performances.

With all the blowout CDs, there have always been performances that grabbed me much more than others, even though ALL the talent is always world class. R.J. Mischo and Gary Smith were just getting into something deeper and more toneful on that first release, even though Kim Wilson, Rick Estrin and James Harman were all laying it down. On the second release, no one touched Gary Primich and R.J. and Smith were on that one also. I did like Annie Raines' amped up stuff. I thought that Hummel stole his own show on the third release blasting cuts like Roller Coaster with immaculate precision.

This fourth one kicks off with Hummel gettin' it just fine on his own roller coaster called Harpo-Ventillating where he briefly quotes all the harp gods along with his own fine licks and it kicks. I really liked James Harman's Extra Napkins, but I've always like that tune and I've always like Harman's tone. Anyone not familiar with Lee Oskar outside of War, will get a good idea of what the man is all about with his rendition of In A Sentimental Mood and how he treats a blues tune on Lee's Blues. Let's just say that his take is different. As is Paul DeLay's. Good to hear the big man doing his unique stuff live. His lick placement is so removed from what any other harp players stick into the blues--but it works so well. They take a while getting his sound up in the mix on Blues and Trouble, but once they do, then the DeLay is over or all over you or whatever. Love the man's vocals, also.

William Clarke is William Clarke and Rusty Zinn really helps him Stretch His Money, as they both stretch out on their instruments on a subject that is very topical today. His Chrome Jumpin' gets his big harp pumping. Sam Myers does his I Done Quit Getting Sloppy Drunk with his partner Anson lending a hand and hits the chestnut, Sweet Home Chicago very well--I can always do without the sing-a-longs though.

I would have like to hear more of Johnny Dyer. His take on You're Sweet is typical, down the river, Chicago blues, but he excels at making it seem simple to do. Carey Bell is in good shape on one fine cut--I Got To Go. He was well represented on volume three, so this may be the only performance that Hummel has left of him and the same goes for Billy Boy Arnold's Sugar Gal, which has him knocking out the John Lee Williamson song, not quite as good as his mentor, but a fine version.

If Magic Dick could sing a little bit better, he would be a monster. His harp tone is instantly recognizable (to me, anyway). It has an aggressiveness that is like sharp slap shots. He spins a nice yarn about Sonny Boy Williamson II before he launches into Pontiac Blues and he heats up Little Walter's High Temperature. I've never thought of his vocals as being bad, but just a little lightweight for the blues.

These releases always have such of a variety of styles and tones and there will always be favored performances on each one of them. What I find most appealing someone else may not, but there is something for everyone that likes harmonica played well and this latest from Hummel is not any different. Anyway--'nuff for now.
Posted by Ricky Bush at 11:13 AM