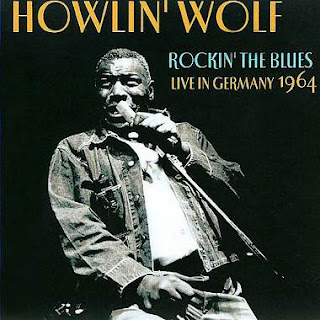 These guys do be Rockin' the Blues is right! From the opening slam bam of Shake For Me to the rollickin' licks of 44, this is primo Howlin' Wolf kicking it for German enthusiasts back in 1964. Backed by his perennial sidekick and blues guitar genius, Hubert Sumlin stabbing, slipping,and plinking some of his trademark licks and tricks, the Wolf puts it all out there with his vocal ferocity. He's got Willie Dixon slapping strings with an intensity that I've never heard from the bass man, especially notable on Wolf's All My Life--I think he thinks that he can catch up with the machine gunning that Sumlin gets going. Good to hear the Wolf jumping into the fray with his under appreciated harmonica skills, which are always so on-the-money well placed toneful licks. And, then, if you happened to overlook what Sunnyland Slim was contributing on the first couple of numbers, well he makes his presence known by hammering the opening notes on Going Down Slow and then weaves around, through and deep into the groove. By the time the set ends, Sunnyland proves that, maybe, Otis Spann came anywhere close to driving the blues on the 88s with this type of ensemble playing. Sweet stuff, indeed--or nasty, or whatever. Oh, then there's Clifton James, who by 1964 was the go to drummer around Chicago blues circles. He's a bit low, but not lost in the mix on some of the tunes, but his contributions are substantial--he and Dixon lock in on a driving version of Dust My Broom and he really rides it on home. The Wolf breaks out the well placed harp licks again and Sumlin is just playing outside himself on the tune. They be gettin' it.

The title tune is an instrumental of Wolf's that has everybody getting after it--especially Hubert. Wolf gets his guitar licks in now and then, though, and sometimes the dominance of his vocals makes some forget that he can pick out some pretty mean blues riffs and he and Hubert bounce 'em back and forth on this little diddy.

I'm pretty sure that it's Wolf's guitar licks that get the 44 groove started (oh, what a groove!) and then Sunnyland takes over and James' snare snaps and pops out the rhythm and Hubert does his sly little things, before Wolf gets going with his staccato tongue blocking harp tone to keep it all in the groove. Ooohh, yeah, this is the Wolf and did I tell you that he's doing it live. If you know the Wolf and Sumlin, then you know what wicked jive they spew out on Howlin' For My Darlin'--SIGNATURE song for them both. Riffs that every blues guitarist that ever picked a string has tried to get their fingers to emulate. Love Me is another Wolf classic and if you only know it by Stevie Ray's cover, then wait until you here the band take it at a slinky slow snails pace that oozes the blue mood. Okay, that's enough. If you're familiar with Howlin' Wolf and know how little he was recorded live, then get one of the best examples of the master in his prime, singing his heart out to a bunch of Germans.

This was one those moments captured of the touring blues musicians that I mentioned in the Little Walter post and it carries a bit of historical significance with it. This Bremen, Germany gig has been available in Europe and Acrobat Records released it there on CD in 2003. Acrobat released it here for the first time in late 2008, so kudos to those cats for that. Keep in mind that live recordings from 1964 are not going to approach the sonics of modern recordings, but the minor scuffs do nothing to detract from the power of this music--for me anyway.

The Wolf's style can be an acquired taste for some--kind of like one of his mentors Charley Patton, but once you get it, then it will not wash off. Actually, this wouldn't be a bad place to start for someone needing a little Wolf, but the Chess box or his early Memphis recordings might be a better fit. Back in the day, there was the Wolf and there was Muddy and they were the Kings of Chicago. Kinda like down the road, it was the Beatles and the Stones. Some liked one or the other and some like both. The Wolf had it going on here. Anyway--'nuff for now.
Posted by Ricky Bush at 6:02 PM

Speaking of what Hubert Sumlin plays, Jonn Richardson told me that if someone wants a particular recorded Hubert lick of the fill or solo variety, you literally have to play the lick for him, because Hubert just doesn't remember that stuff abstractly, it comes to him when he's playing or not at all. It reassured Jonn a lot about the business of getting into the moment and staying in the moment, rather than building a vast encyclopedia of stuff that you can remember on demand. Your signature licks can come out of the habits you have when you've got your flow going, they'll come up again when that's happening. Thought I'd mention that because it's the opposite of what many people practice. Mind you, it's not that Hubert doesn't remember a lot, he does, but there's a whole lot he didn't bother to file. He sounds inspired because he *is* inspired when he does those things, and that's why he's hard to imitate well: others can only play a catalog of Hubert's licks, they can't get into his mode of playing the way SRV crawled into Albert King's style and took it somewhere further, for example.

Yeah, I think that you are pretty much spot-on in regards to Hubert's creative lick stream. I think once he establishes the familiar intro licks to songs such as "Smokestack Lightning" or "Killing Floor", then all bets are off as far as what he'll come up with on the fills and solos and I don't think that he knows until he does it. Like you say--"in the moment" or just in a Sumlin zone and by what you're saying, he probably found no reason to log any those licks, that just flowed out, to memory. I think the Little Walter played in much the same way--"let her fly". Anyway--