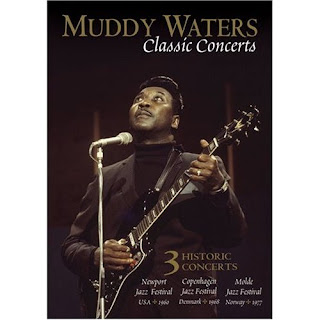 
I mentioned this DVD a few months back when I told my son that Muddy Waters would be an interesting subject for his History Fair project, especially since the theme was historical figures who left a legacy behind. I used that as an excuse to purchase Muddy Waters Classic Concerts. The concerts were pulled from the Newport Jazz Festival in 1960, The Copenhagen Jazz Festival in '68 and the Molde Jazz Festival in '77. I never could persuade him to sit through the entire performances. I had told him that what would be of absolute value for his project were the inclusion of two interviews. He wanted to cut to the interviews, but I told him that he really needed to soak in the essence of the man. His response was, "Dad, I've been listening to your Muddy Waters since the day I was born." He had a point.

This collection is brought to us by the same folks that issued the complete Little Walter that I raved about earlier--Hip O Select in conjunction with Reelin' In The Years. It is just so remarkable to be able to watch the blues master kickin' butt in concerts separated by almost a decade between them. Each of his assembled bands displayed such a high level of blues musicianship. Notice that blues isn't in the title of any of these festivals. It took awhile for the music to earn its own place in the spotlight.

I didn't obtain a copy of Muddy's historic Newport Jazz Festival recordings until they were released on CD a few years ago. Live recordings of blues bands in the '60s were very rare. The Newport recordings were released in stereo sound and captured one of Muddy's best bands laying down an energetic set of Chicago blues and showed an East Coast crowd how the Mojo worked. A clip of this frequent encore tune has been out there for some time and his dancing and clowning with James Cotton is just flat cool. All the footage that has been available was in recorded in mono. The folks here took the stereo CD tunes and synced them up to the video and it works marvelously. A couple of tunes, that were not on the original stereo audio release, sound just as potent in mono and nothing is aurally lost there. The producers also edited out host intros, and other such distractions, to bring us an entire 26 minutes of the Newport show. Guitarist Pat Hare, pianist Otis Spann, bassman Andrew Stephenson, drummer Francis Clay and Cotton smoke 'em on down.

Otis Spann is the only musician still with Muddy when he hits the Copenhagen stage with guitarists Luther "Snake" Johnson and Pee Wee Madison, harpman Paul Oscher, bassist Sonny Wimberley and drummer S.P. Leary and they are as a potent of a team as his previous bands. Eight years later, the set list includes a few of the same hits that he wowed the Newport crowd with, but if the festivals are anything like they are today, the artists have to get in, do their top hits and get out. Along with Hoochie Coochie Man and Got My Mojo Working, Muddy throws out a nice rendition of T-Bone Walker's Cold, Cold Feeling. Pee Wee and the "Snake" have always impressed my with their blues picking and just how they weave things around each other. Nice to see Oscher in action also, especially in the opening. What is missing is the fact that this band carried no piano player.

Muddy's band plays for a rather subdued Norwegian audience at the Molde Jazz Festival. The band roster is completely different than it was nine years earlier, but Muddy never put together a band that couldn't get after it. A Luther Johnson is playing guitar, but his middle moniker is "Guitar" and not "Snake". His solos are just as tasty as his predecessor, though. The other guitarist is Bob Margolin, who was the subject of one of my very first posts on this blog. Bob had a hand in the process of getting this project off the ground and has some very informative liner notes of his remembrances. Valuable stuff. Jerry Portnoy is in the harp chair now and having a chance to watch him and listen to him work is a treat for me. Listening to him blow Evan's Shuffle was worth the price of the DVD. Calvin Jones on bass, Pinetop Perkins on piano and Willie "Big Eyes" Smith on drums. This band, minus Margolin, became the first incarnation of The Legendary Blues Band when they left Muddy. I reviewed some of their stuff earlier in a previous post. Blow Wind Blow crackles with energy as Pinetop lays down a solo that proves just how well he filled Spann's huge shoes.

If you know Muddy like I know Muddy, then the Norwegian and British interview snippets will provide no additional insight, but it still nice to watch him answer for the upteenth time, "What is the blues?" Even if you have a bunch of Muddy Waters, a little more is never too much and this is absolutely priceless. Now, I'm trying to decide if I want to purchase the recently released CD The Authorized Bootleg, Live From The Fillmore. With George "Harmonica" Smith blowing the Mississippi Sax, I just may have to bite. If I do, then you'll hear it here or read it here or something like that. Anyway--'nuff or now.
Posted by Ricky Bush at 9:57 AM