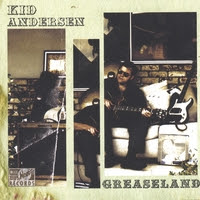 As my next birthday rapidly approaches I'm reminded that I never did discuss Kid Andersen's music as promised. Well, not promised, but I said I would after witnessing just what he could do with a guitar in Rick Estrin's Nightcats just about a year ago--and after downloading his albums The Dreamer and Greaseland to my iPod. Now, I could claim that I've been too caught up with writing fiction, reading fiction and reading about writing fiction, and that would be sorta true. BUT, I think the real reason is that I've never really been able to get my arms around what it is that Kid Andersen exactly does with the music. Description eludes the man and his music, but he is a novelist. He just tells his American tale in his songs--even though he was born and raised in Norway.

Greaseland has been tagged in the liner notes as being "a concept album describing the life of a broke, disillusioned drunkard musician who loves to have a good time, but is overcome with the blues". Okay, that's it, 'nuff said and it comes real close, but he displays so much more and it's just difficult to put into words. He puts it all into words very well, though, and when he not spinning his story lyrically, which bounces between dark depressive depths to a "party on dude" attitude, he's prancing it out with his guitar. His stories deal with the exciting highs and the resulting hangovers of life both lyrically and instrumentally. He embraces cliches with zesto, but wrings them out with plenty of originality. It's as if he and Kurt Vonnegut collaborated on his verses. Instrumentally, it would be he and EVERYbody who's ever plucked six strings--that's how wide his palette seems to be. Okay, I tried.

One minute "The Kid" wallows around with The Dirt People and it's most likely because he's feeling lower than dirt at the time. The next minute he's picking a million miles a minute on Mexican Kid!, which revs up the action that only a Dick Dale could only imagine--surf turf with a latin tinge. He'll go back down low and prove his blues guitar mettle on Peter Green's Jumping At Shadows (one of my favs from Fleetwood Mac) and then rip it with a Magic Sam style feeling alright groove on Greaseland Boogie, which basically recounts living the life of easeland at Greaseland where they party hardy without a care nowhere. Ex-employer Charlie Musselwhite even gets in on the preceeding with some of his signature harp licks bouncing around the studio. That's the story morning glory--he'll incite the partying with C'mon Johnny, Let's Hit That Town and then regret doing such on I'm Tired, deadtired, dogtired, too tired--but he'll still go get him a jug of wine to help face the day.

His vocal chops remind me a lot of Charlie Musselwhite's--not much range, but a ton of emotion. The slight gruffness in his voice, barely more than a speaking timbre, fits his songs very well. He sings plenty about women. Singing Jennifer, Jennifer, he warns the gal that "I smoke and I drink and do all the things you hate" and that he's a "bad motherf*&%$ who likes to stay out late". Jennifer just thinks that she knows what awaits her.No need in reminding what Skip James' Devil Got My Woman is all about, just that Kid nails the otherworldly vibe that only Skip James conjured up. Brandy! kicks off like a Freddy King instrumental, but is only declaring the sweetest thing that he ever did see, because when he was feeling low down and dirty, she came by and got him drunk. What a gal pal! He certainly squeezes the joy from his strings, along with some nice blues harp call and response by Richard Gjems.

Along the way, the Kid throws down other drinking tunes like The Bender and his ode to Whiskey!. He has those party tunes cranking with plenty of musical twists and turns--and plenty of times within the same song. Hard to predict where he's going when he gets going. I'd say that some of Junior Watson's idiosyncracies rubbed off on him while tooling around the West Coast. The Kid does issue a caution before all the partying gets rolling on the deep vibed, atmospheric It's Dark In Here. Nice blues harp helps provide an eery mood to the song along with Kid's echoing tones. My hope is that most of his Greaseland story is fictional. 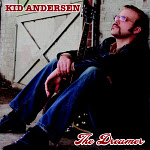 The Dreamer and Greaseland would make perfect companions in a two disc set. Bookends if you will. The Dreamer is more about redemption and optimism. He looking for that better day, but wishing for old values at the same time. There are still songs about drinking Rocket Fuel, but he balances that out with tunes such as A Better Day and Take It Slow. The latter sounds as if he's melding Roy Orbison's Candy Man with Willie Cobbs Don't Love Me with Chuck Berry's Memphis thrown in for good measure and then some Earl Hooker style wah-wah slipped into the mix. The acoustic harp definitely gets the Candy Man thang going on. I love the former for the B.B. King licks that he jabs out and just the solid blues being laid out.  I think his masterpiece, though, has to be Dig The Pain. No, maybe, The Dreamer is...no, I think that The Nightmare...Well, never-the-hell-mind. A bunch of his songs twist my mind. I'm not even going to try to describe the ten minute The Nightmare (No Where To Turn), but I love it and the deep harp licks he lets into the song. Dig The Pain starts out with a great slapped bass rhythm and then he slams it and jams it and fills it full of wicked word play. Some really nice blues harp helps set the tone again. I don't know who is blowing, because these are iPod tunes with no listings for who is who. There is too many tongue blocked notes and slaps for it to be Charlie Musselwhite and I did hear that Mark Hummel played on some it, but regardless, the harp tones are righteous-especially on the nasty solo within The Nightmare.

Serves Me Right To Suffer takes John Lee Hooker and throws down some Buddy Guy tonal slinging along with a bit of Sonny Boy Williamson II in the lyrical mix and match and it is so exquisite. Along the way, some fingerpicked acoustic seeps into the background, then takes the foreground, and then a back seat to some more electric bamm. Danged it, I can't write while this plays. Speaking of mashing styles, take that Buddy Guy style tone and mash it with some Sly Stone and stir in a pinch of Booker T & the MGs and you'll have Soul City.

Okay--that's it! I quit! This exhausted me. Just get Chrisoffer 'Kid' Andersen's stuff and forget you ever read this review. Decide for yourself where the Kid is coming from, but I do know this--the boy can play the guitar. 'Nuff for now.
Posted by Ricky Bush at 5:09 PM

I enjoyed shooting the photos on the cover of Greaseland. That was a fun day.

That's darned cool, Joe. Had to be a blast hangin' with that dude.