Authorly things jumped in my path to purchasing more blues music for my birthday last month. One of those Kindle e-readers came my way as a gift and I set about spending b-day money on e-books instead of blues. Nevermind that I haven't read all the papermade books that I bought back in June for Father's Day. Never thought that I'd get into buying more books than blues music, but I guess my thinking is that it'll make me a better writer.

Every once in awhile, during a hiatus from buying blues music, I'll try to remind myself that I have tons of blues music aroung the house, so I'll grab something off the shelf and give it a spin. It'll also remind me that there's some fine musicians that I need to dust off more often. Lots of times it's just a random grab, but this time I went looking for John Primer's The Real Deal because it was my absolute favorite blues release back in--wow, was it really 1995. Can't believe it's been that long ago. What impressed me the most was that the title lived up to it's name--the CD was chock full of stone cold, solid blues played with conviction. It represented John Primer's step up to the majors in terms of recording contracts. The Code Blue label was a subidiary of Atlantic/Warner records, Mike Vernon producing a great bit of those releases.  The fact that Primer had Billy Branch on board whipping up blues harp notes Chi-town style had me listening to the release fairly consistently.

The problem back then was that I reviewed a slew of CDs back during that period, with many being sent to me with expectations of a quick turnaround for the review. My ears were bleeding the blues, so plenty of releases hit rotated through my head, then headed for the 'reviewed' stack. Not The Real Deal, because Primer and Branch played my kind of blues to a tee. It also reminded me just how much I liked Billy Branch's blowing, who I heard for the first time on Johnny Winter's 1990 return to the blues on Guitar Slinger. The man met the challenge of  keeping up with the Great Albino and help ground the album in deep blues. Sittin' and listening to The Real Deal again over the past couple of days also reminded me that I haven't bought anything by either of these guys since then, except on the ensemble cast represented on the YouTube clip here and the CD Chicago Blues: A Living History which I reveiwed last year. These two guys highlighted that double live recording for me.

Primer's newest album is called All Original, because it features, well, Primer originals, but The Real Deal featured half a program of well written tunes in the vein of Magic Slim (his ex-boss) and Willie Dixon. So, even though he forayed into covering other artists, such as the Elmore James tribute, Blue Steel (and by the way, he's a heck of a slide guitarist), he's always had a powerful blues pen. Now, I'm sort of departing from this being a regular review type review. I guess this is more to remind myself (and others), just how potent Primer and Branch were on this release fifteen years back and to remind me that I need some new blues--by both these guys. Heck, I don't even know if it's still available any longer, but I guarantee that it is worth seeking out---and then go do what I'm going to do. Get some of their new stuff, like I plan to do.


**********
﻿As an addendum, since I have Primer on my mind, I heard some really fat, fat toned harp on sat radio's BB King Bluesville being played by Bill Wax. Something I'd never heard before, so I stopped all activities in hopes that Bill called out the artist's name. This guy just flat slipped up on me and the band played some kind of knocked out Chicago style blues. I had to go to http://www.chrisharper.info/ to find out that Swississippi Chris Harper had rounded up Jimmy Burns, Bob Stroger, Willie 'Big Eyes' Smith, and John Primer for a foray into that type of blues on Four Aces and a Harp. I'll leave it at that, because that's all the info I have right now--but I plan to investigate (and invest) a lot deeper into the music from this guy. I'll check him out and get back later, but with these guys on board, it's got to be killer. 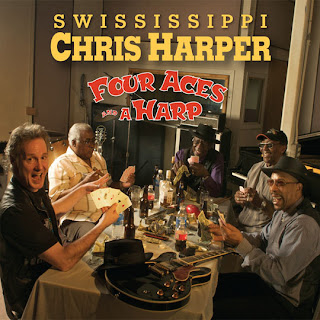 Ricky,
Since starting this blog you've always assisted me in lightening my wallet, so back atcha!
On Nov. 16 Lynwood Slims new album featuring the Igor Prado Band hits Amazon. They have tracks listed so you can get a sampling of what this CD is all about. Slim swings like mad with the help of this under recorded Igor Prado. I must buy.
Dean

Thanks for the heads up, Dean. I love what Lynwood Slim gets going. Need to pull some of his CDs off the shelf now and re-aquaint. Been meaning to get some of the Prado Blues Band's stuff and haven't done so---yet.

The Real Deal is an excellent CD. Billy Branch and John Primer backed a lot of guys during the recordings made in the early 90's released on Wolf Records. Those are great, too.

Billy also does some really nice work on Willie Kent's recordings during the 90's, too.

Yeah, I've Billy seems to be the go to studio guy when it comes to supplying authentic Chi-town blues on the harp, Joe.