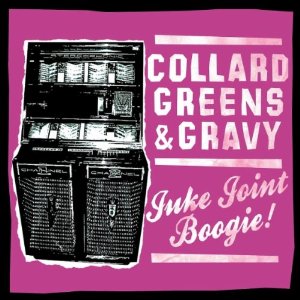 Ding dang dagnabbit! I've always kept up with my boys from down-under, but somehow Juke Joint Boogie slipped by me this past October. That did coincide with me being up to my ears with rounds of editing RIVER BOTTOM BLUES, but darn it, I've never let anything, that Ian Collard's blowing, pass me by. As I've mentioned before, he's one of the most soulful and toneful blues harp players doing that thang--and one of my favorites. Oh, and he can sing the blues as if was born in the Mississippi Delta instead of on the coast of Australia. So, I'll just cut to the chase (since I could have written about this last Fall) and say that he and his partners get it going on with some kind of down and dirty blues of the variety that makes my heart flutter. Maybe not flutter, maybe just skip a beat or two.

Where the fellows mined the Mississippi Hill Country stompin' grooves on their last outing, Devil In The Woodpile, this time out they summon the spirit of Sam Phillips' Sun Records. Where Collard set his harp aside a few times on the latter to add some great guitar tones in tandem with James Bridges, I sure do like it when he keeps harp in mouth and goes about proving just how fat and deep he can get with his harmonica tones and that's what he's doing throughout Juke Joint Boogie, kicking it off by getting inside the skin of Willie Cobbs' You Don't Love Me. Of course, it's such a great song that a few people have recorded it, including the fabulous version by the Allman Brothers, but CC&G owns the song from the minute Collard sets the stage with his opening harp riffs and mournful cries of Ah, ah, ahah, ah, ah, ah, ah, ahahh.

Doctor Ross' Cat Squirrel, which was his reworking of Catfish Blues, puts the band solidly into the type of romping Sun Records' had down pat with James Bridges' ripping the vibe with his opening guitar licks before Collard's harp echoes his lines. Drummer Anthony Shortte is in his element with the type of racous racket they want him to slap down on the skins. Shortte drives the heck out of the good Doctor's one man rave up and Collard spits out a wonderful solo break, mixing the Doc's potion with his own licks. I'd think that since Collard does a solo act with guitar and racked harmonica that he's studied methods employed by those that mastered it, such as Ross, which maybe points to how he can crawl into the material so well.

Ross did have a tune called Juke Box Boogie, but there is no relationship to CC&G's title cut, Juke Joint Boogie. Doctor Ross basically recycled Little Walter's Juke and these guys just roll and tumble a shufflin' boogie out the door and onto the porch with Collard's opening riffs sounding like a trumpet's Reville yanking everyone to their feet. Quite rollicking stuff, mate, with the blues harp rippin' the nasty (with some spot on bends) and the guitar slappin' bass lines.

You Hear That Ramblin' has a Good Morning Little School Girl type harp riff because Sonny Boy Williamson I wrote both of them and employed similar licks to both tunes and Collard nails it down, but with full on amplified whomps as the band gets a Memphis beat loping along. They get a similar lope going on Goin' Back Home with Collard's intro sounding much like Charlie McCoy's on Roy Orbison's Candy Man, and Bridges' getting pretty twangy with thang.

Oh, I guess I can rave on and on about how good this release is. I guess I could gush as to just how much I love the low down and dirty they get on Low Down, especially when Collard pulls the nastiest notes from a ten hole diatonic that I've heard in a long time and how the hair on back of my neck bristled when he bends his notes down to the bottom of the barrel and then slams 'em around a bit before he lets them back up, and how Bridges' slid his slide guitar through the primordial muck while Shortte beat the song senseless, and then how they shift into riding a train rhythm on Out Last Night with Collard sucking on a mellow acoustic tone. I guess I could keep coming up with ways to describe what Ian Collard does with that harp in his mouth, but I would run out of superlative adjectives, so I'll just stop here and say this--if you love blues harp the way that I do, get Juke Joint Boogie.

Once I found out that this release was available, and not wanting to wait for a shipment from Australia, I sucked it off iTunes. That's also why I can't venture into which songs just might be CG&G originals mixed in with the covers. If you want a hard copy (which I'd prefer), you can venture over to http://www.collardgreensandgravy.com/ and it'll link to their Australian management site. It is available on Amazon, but don't go there--they ask $48 as an import price. 'Nuff for now.

P.S.--Please read the comment left by Speedman. He lists the songs that are originals and also points out that the CD is available at http://www.lwharpamps.com/ He also echoes my thoughts that Ian just might have used his spiffy Lone Wolf Harp Attack pedal to emphasize that gritty, cranked, small amp tone. I've touted those pedals before and have to say that they are the 'bees knees'--check out the whole array at the same website.
Posted by Ricky Bush at 9:00 AM

"Look How You Broke My Heart,", "Juke Joint Boogie," "Low Down," "Goin' Back Home," and "Out Last Night" are Collard originals. At the first listen, this is my favorite since their first CD, has a similar unity of mood/sound and the harp is back in force. I like that many of the songs are shorter and that the whole record is--it feels like a cohesive LP made up from 45 singles. Sounds like Ian might be running a Lone Wolf Harp Attack straight into the board on at least some songs, and the JUKE JOINT BOOGIE CD is available at www.lwharpamps.com for $15 + shipping.

Hey, thanks Speedman. I could have taken a guess at those being originals, but didn't know for certain--now I know for sure. I know that he has Lone Wolf Pedals in his arsenal and it sounds like they are employed for sure--but then I didn't know whether or not he had a small amp cranked in the studio, so I didn't guess at that either. The Harp Attack will sure get that same grit going. Great that Lone Wolf is carrying the CD--I'll point on that out in an edit.