Suddenly Everything Got Fuzzy

Knowing that I've spent hours on end delving into the inner workings of my harp amps to tweak and modify them, my son asked me if I'd build an octave fuzz pedal with him for his guitar. There seemed to be a few more tones that Jimi Hendrix got on some of his stuff that he wanted to emulate a little closer. I told him that we could look around for a kit maybe and go from there. We found one at http://www.buildyourownclone.com/ Their kit sold for $68 plus shipping, which seemed like a lot, but then we priced manufactured octave fuzz pedals and they ran $230 and up. In that case, I told him, a kit makes sense. So we ordered one and they impressively sent it out the day ordered and it arrived per UPS a week later. 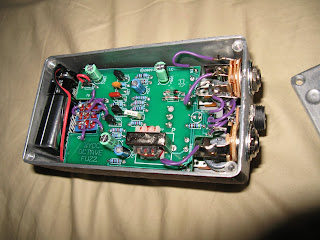 We spent the better part of yesterday sticking and stabbing the ol' soldering iron to tiny resistors, capacitors, transistors, etc...to the tiny circuit board. It was touch and go (literally) throughout the entire process. There is so little room to negotiate the tip of the iron around the pcb without fear of melting down an adjacent component or the board itself. Of course, there is always that printed instruction or two that assumed that we knew exactly what they are instructing, but didn't. So we had to assume. Most of it was clear and concise for us virgin pedal do it yourselfers. Since it is a diy kit, they guarantee nothing as far as it working once the sticking and stabbing are done. That's fair enough though.

Once I soldered a few resistors down, I turned things over to him and he got the hang of it pretty quickly. It's that or destroy the product. He found the experience very tedious and very intense. Wrack his nerves a bit, I'd say. I'd take over only when we hit one of those tight shoe spots and he wanted me to ruin things instead of him. 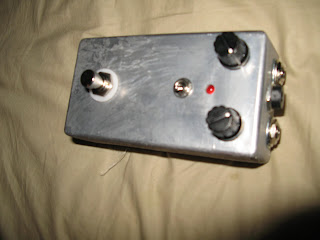 We had to wait until this a.m. to crank it up, and lo and behold it worked beautifully. Now he can get the octave fuzzy thing going on and he nailed the Hendrix tone that he sought. He said that the fuzz has a much better tone than the manufactured model that I bought him a couple of Christmas' ago. Bonding this pedal together gave us a bonding together experience that should last awhile---'til he hears some other tone that won't come from his guitar and thinks that we should do it all over again. Me, I prefer the nasty ol' blues played with a guitar chord straight to the amp. Someday that'll impress him just as much. 'Nuff for now.
Posted by Ricky Bush at 4:41 PM