Kickin' It With The Box Kickers 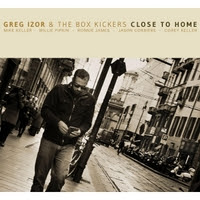 It's been a couple of years since I reviewed Greg Izor and The Box Kickers first release, I Was Wrong. Since then, Greg has been on a roll, touring the country and many parts of Europe. He's headed back overseas for a summer tour as I type this, with stops in the Canary Islands, Spain, Italy and Norway.

Back home in Austin, Izor has admirably filled a void left after the passing of Gary Primich. Much like Primich, Izor has a palette on which he splashes color from other genres kin to, but slightly outside of the blues; all while blowing superb harmonica notes. I think that some labeled Primich's last recordings as Americana, I guess since the Grammys lumped Blues into that category, but all of Primich's albums had that musical extension applied. Primich's influence most certainly has seeped into Izor's musical vision, but he definitely brought some of that with him after living in New Orleans and mentoring under Jumpin' Johnny Sansone, who mashes up and slings the same type of musical gumbo.

A strong suit of Close To Home is Izor's songwriting. The twelve self-penned tunes here offer ample examples of a man who is a keen observer of the life that has swirled around him. I'll stick him on the same level as my favorite songsmith, James Harman, when it comes to that. I sure don't know how autobiographical these cuts are, because I don't know if he's ever had trouble collecting money from deadbeat friends on "Get My Money", if he's been unemployed and run out of whiskey when his lover runs out on "Can't Get It Right", if he's been in prison and having trouble with doing "Straight Time", if his love is stronger than a monkey grip on "What's It Gonna Take", if he shot pool with his friend "Broadway Joe", or if he's been in the military on "G.I. Blues", but he spins some mighty fine believable stories. And that's what his songs are; well crafted, well told stories.

Izor's vocal chops aren't of the octave ranging type, but his singing style is very effective. He's gets these small nuances going that produces enough tonal variety to keep things interesting, much in the same way that Doug Sahm got his songs across. On the bonafide blues numbers he puts across a sense of urgency when shouting that he wants his money on the shuffling blues, "Get My Money", doom and gloom drip and seep from his lips on the lowdown, slowdown, "Broadway Joe", he soars a bit as he tells stories, sad and true, on "The Rub", and he even sounds a bit like James Harman on "Hooper Street". I can hear the heartbreak in his voice as he sings  I lost everything when I lost that woman of mine on on "Can't Get It Right". He gets downright twangy on "Straight Time", "What's It Going To Take", and "Call Me Lonesome", which mixes up a little country western and R&B together. Speaking of Doug Sahm, to my ears he evokes Sahm's cohort, Augie Myers, on these cuts.

Izor is a badass harmonica player and can throw down with the best of 'em (I've seen his high energy life shows), but he doesn't set out to prove that on his recordings. His harp is always in service of the song and not a riff-a-rama fest. He does come out smokin' on the opening cut with some greasy amplification on "Get My Money" and struts out some nice solo licks, but then he backs off with simple, deeply drawn chromatic chords to open and then close out the gutbucket "Can't Get It Right". Most of the song is filled with some nice single guitar notes from one of his two note slinging Box Kickers, Mike Keller or Willie Pipkin. One of them also dominates the twangy "Straight Time" also. Izor does display his chromatic chops on the instrumental, "Three-eyed Tiger", which sounds as if the tune would be at home in bar in Spain with a couple of Flamenco dancers tapping out the rhythm. He does the same on another instrumental, "Close To Home", but puts the chromatic through it's lowdown blues pace. His chromatic also sets up the lost love story, "The Rub", and some mighty fine big chords lends to the moodiness of the tale. of I'd venture to say that Sansone probably had a lot to do with Izor's excellent attack on the big harp.

His acoustic harp skills are on display on "Call Me Lonesome", "What's It Gonna Take", and "Hooper Street". On the first two, he waits until mid-song to stick his harp into the mix, tossing out some great octave and upper register runs into "What's It Gonna Take", and nice single note runs on "Call Me Lonesome". Sonny Williamson II style licks drive "Hooper Street" down into the alley. He hangs around the low end of the harp to provide the doomy, gloomy "Broadway Joe" with the amplified doom and gloom tone the song calls for. He effectively uses just a few deeply drawn notes through his harp mic to drag this song into the depths of sadness.

He places no harp into "From Hello" nor "G.I. Blues". The former would most certainly get the "two stepping" dancers out onto a barroom floor. The ballad has that greasy Louisiana swampy feel to it with a few countryish guitar licks and crashing cymbals from Jason Corbiere. The latter has some finely picked blues licks dominating throughout the tale of serving until the fightings done.

Of course The Box Kickers represents one of the best backing bands that a harp player could possibly recruit. Mike Keller plays with the band whenever he's off the road with that other harp guy, Kim Wilson and his T-Birds. He and Willie Pipkin are like red beans and rice. There is no indication as to when one is taking a solo, but when they aren't, their rhythm guitar backs the other as good as any example that I can think up. Corbiere and Corey Keller split equal time at the drum set on these twelve cuts and both steer the ship when they do. Oh, and the bass player? I'd run out of ink if I attempt to run down the number of blues bands for which Ronnie James has thumped his instrument.

Danged fine recording by a danged fine harmonica man and a danged fine band. Can't ask for more than that. Greg Izor has definitely established himself as one of the best in the business and adds to the legacy of fine harp men who jumped started their careers from an Austin launch pad. Close To Home will sit close to home next to my stereo for some time to come. Check out www.gregizor.com for info about where to buy and find out when he's coming to town (after he gets back from Europe).