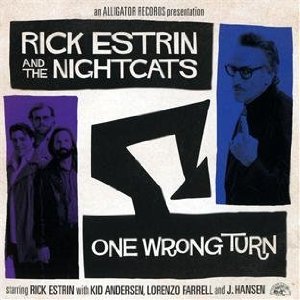 This whole post is relatively old news, which means it ain't news. I will start with the newest by mentioning Rick Estrin winning the award in the Best Harmonica category at the Blues Music Awards back in May against some might powerful competition. He also snagged a nomination for The B.B. King Entertainer of the year, which he certainly deserved to win also. I've never seen the winner, Curtis Salgado, play a live set, but he must put a whale of a show to beat out what Estrin brings to the stage. Certainly, with all the health battles that Salgado has faced (and is still facing), he dang sure deserves the nod there. Rick Estrin and The Nightcats received a nomination, but were beat out for Best Band honors by the Tedeschi Trucks band, and Kid Andersen (Estrin's guitar slinging partner) was trumped by Derek Trucks for Best Guitarist. Not the way I think it should have gone, but I guess a somewhat youth movement moved the voters. At the end of it all, though, I think that Rick Estrin and The Nightcats have perched themselves back on the plateau that they reached when his co-conspirator, Little Charlie, led the band with him.

What is news, since it ain't happened yet, is that Rick Estrin and The Nightcats will return to Houston's Dan Electro's Guitar Bar on June 22. Great news, I'd say, since they'll be within driving distance of my Ford pickup. The H Town Jukes, some friends of mine, will open the show, so that'll be a treat also. Looking forward to seeing the bad boy of the blues again. That's what my wife called him after I took her to see him years back and hearing some of his lyrical double entendres. "He's a bad boy" says she.

Back to the old news. I almost hung my head, but didn't, when I pulled my copy of One Wrong Turn out of its cubby hole and realized that I've had the darn thing almost a year and never got around to jotting down a review of some sort here on the blog. I'm sure that everyone with a passing interest in blues harmonica has had it almost as long as I have and have spun its wheels off since then. If not, then their interest in blues harmonica was just that--a passing interest, because this one deserves a spot in their blues rotation. Still can't believe I didn't pass along my opinion last year, but since I didn't I'll throw down something short and sweet.

One Wrong Turn picks up where Twisted left off with Estrin and crew establishing themselves as a band setting out to establish their Nightcats groove, not in opposition to the Little Charlie era, but with a stamp that says this is Rick's crew now. Of course, Estrin's witty observations of life as he knows it are on full display on every song. It's even rubbed off on drummer J. Hansen's song smithing, which fits nicely in the Estrin camp when he sings "You Ain't The Boss Of Me". His relentless beat drives this rocker and Kid Andersen rips the heart out of it. He also does the dog bark on the opener D.O.G. When Estrin's not lauding or lamenting over those of the female persuasion, he takes the dastardly deeds of male members of society. Here he sings Sniffin' 'round, sneakin' where you don't belong/Just huntin' for a spot to bury your bone/You're just a DOG.

And speaking of old news, Estrin does just that on "Old News". He does his superb Rice Miller acoustic best while talking about staying confused as he trots through life and as he says Yeah, but that's old news. He's always nailed down Sonny Williamson II's timbre, tone and attack and tends to give a nod to the master on most every album he's played upon, and while he can spit out the book of Chi-town style amplified at will, he's moved way beyond anything remotely slavish to that mode of doing his business with his harp. Beginning with the release of Twisted, I think that he began to develop a Rick Estrin mode of playing amplified blues harp that'll be as readily identifiable as his own, much in the same way that us harp players recognize a Sonny Boy or James Cotton style. I'll be darned if I can describe all the different tonal shifts that he get going with his harp in his mouth. He goes from wide open, full chord blasts with double stops torching his amp speakers to superbly bent slip sliding single notes with nary a cliched note. He yanks out some great chromatic bombs on 'Lucky You", on which he just wishes he had the luck of someone else.

Of course, I'm preaching to the choir here as far as Estrin's harp skills go, but if you only know him from the Little Charlie era, then you owe it to yourself to experience the signature sound that he's developing. If you don't know him from the Little Charlie era, then you've missed a one of a kind blues band at work. Iconic, I'd venture to say. And, I have to assume that there are those who aren't familiar with Rick Estrin's body of work. I had to chuckle when I read a One Wrong Turn review on Amazon that read "This is a guy with a great future". Well, this reviewer needs to work his way back to 1989s Big Break and should definitely stop off and enjoy Estrin's On The Harp Side aimed to appease blues harp fans with a program of covers representing some of the finest traditional blues songs ever written.

Same for the Nightcats. Back in the day, they were never a twelve bar shuffling groove blues band and they darned sure ain't now. They certainly play the blues while they mess with the timing, the rhythms, and the beats on the songs, sticking in a bit of jazz or roots rocking along the way. J. Hansen and Lorenzo Farrell are no small part of the overall sound that the band achieves. Besides playing bass, Farrell is also adept at swirling some organ and piano in the mix, which is highlighted on "Zonin'" with a great sax break by Terry Hanck and wild guitar leads from Kid Andersen. I think Farrell and Hansen deserved their own nominations at those blues awards for what they bring to this band.

Of course, Kid Andersen makes the stew simmer and boil over throughout the entire session. "Broke and Lonesome" is a tour de force from the Kid's fretboard, and if it's the lowdown twelve bar you want, then listen to what he twists through the song. Ya never know which way he's going to head once he sticks his fingers on the strings. Now, I guess there are a few guitarist who could have stepped into the shoes of Little Charlie; Rusty Zinn paired up with Andersen on the aforementioned On The Harp Side and smoked it on down, but I don't think anyone can equal the Kid as the perfect foil for Estrin's vision. Doesn't hurt that he runs Greaseland Studios, which is fast becoming the go to recording facilities on the West Coast.

Ok, I don't think I'm going drag out this old news review any longer than I have. Said I'd keep it shourt and sweet. Sure I could go through each song and gush about the witty lyrics, the outstanding harp licks, guitar licks, and the jump and jive of each, but I feel sure that most readers here know all that by now. I ain't gonna promise, but I darn sure plan to not wait a year to get a review up on the next great thing in the world of blues harp. 'Nuff for now.