Got a little distracted by applying for a facebook account and figuring out how all that goes, but I've been meaning to follow-up my earlier teaser with more of a review of R.J. Mischos' latest. So here it be.

The proceedings kick off with really deep toned chromatic notes setting up a familiar travelling bluesman's need to just get home on Two Hours From Tulsa. I may use the "deep toned" phrase too often in my attempt to describe what I'm hearing, but by golly that's just what R.J. gets going--sounds like it is reverberating from the bottom of a barrel. The groove hints at Otis Rush's All Your Love I Miss Loving, in large part from Kid Andersen's guitar knowledge that he didn't get from college. I mentioned just how much he impressed me at the Rick Estrin and the Nightcats' show, and he certainly doesn't disappoint throughout this disc (which by the way he co-produced with Misho). He plays inspired guitar licks and it ain't no telling where the inspiration's coming from. One minute he's quoting a smidgen of Otis Rush and then throws out something akin to Albert King's style and then he threatens the fretboard with his own creations. A little tasty wah-wahed rhythm guitar backs him up, along with Sid Morris' organ swirls. I don't know if Rusty Zinn's doing the rhythm work or not. He and the Kid swap off on the lead solos, so I'll assume that they do the same with backing guitar. R.J. takes this one on home by working his chromatic from the low down notes to the high end. 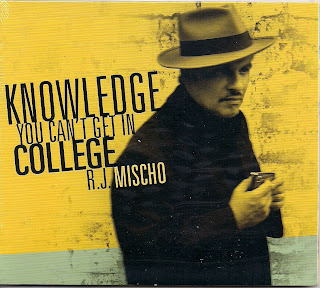 Okay, that song took waayy too many words out of me, but I had to get them out. Now if that first number had the deep toned blues harp working, R.J. sounds like he absolutely swallowed his diatonic on Too Cool For School, because his thick notes come welling up from way down inside of him. This fast paced instrumental showcases what the man does best--worry the hell out of his harmonica reeds with great note choices. He lets everyone jump on this one, though, especially veteran Kedar Roy slapping on his upright bass with a little jazzy sensibility.

R.J. works his vocals up into his high blues falsetto and back down again, which is sort of his trademark singing style, on the title cut. I've always liked his singing. He works a lot of chords, octaves, and double stops into his harp solo,
as he explains just some of the things that a college education may not help. He's mastered being able to create and coax different tonal qualities from his harp playing, which always lends his releases a great deal of variety. His songs follow suit and keeps his program from getting stale with the same ol' blues.

Little Joe is a case in point. Driven by hand drums from June Core (ex-Nightcat drummer) and surprise...Rusty Zinn, R.J.'s melodic acoustic harmonica makes this sound like a country ballad that Marty Robbins could be comfortable singing, but this Little Joe ain't Hoss Cartwright's little brother. This one's always in trouble. Shifting from amped up wallop to acoustic harp, with the aforementioned chromatic work thrown in for good measure, is common to R.J. modus operarandi (or something like that).

Rusty Zinn's guitar swings into action and is featured prominently on Ain't Nothing New. I've posted about just how much I like Zinn's playing before and R.J. allows him to take it on home on this shuffling blues. He does nothing fancy, just plays down the river, solid, blues licks. He's a proven commodity when it comes to backing up what a blues harp player needs. He cut his teeth on Kim Wilson's solo efforts, so he knows the way around the block. R.J. whips out the amplified fatback again, and twists and turns the blues scale notes to suit him.

Not going to wade through each of the fourteen cuts on this release. These five that I just mentioned are sort of representative,you might say. Kid Andersen (who joined up with Rick Estrin after leaving Charlie Musselwhite) and Rusty Zinn bounce back and forth, sharing their lead chops with us, R.J. gets after it, regardless of whether he sucking on his chromatic or diatonic, amplified or acoustic. He's written some great tales to tell us and he sings them very well. As always with R.J. Mischo's stuff, I'd be hard press to pick out a favorite tune, but as always, if someone pressed hard enough, I choose a song with some of his nastiest, dirtiest, fattest, amplified tones. Don't Look Twice fits that bill, plus I love the Kid's unpredictable guitar licks, and his unabandoned playing on this tune warning all of us not to think twice about his woman. Love the whole enchilada, though. Mighty fine blues harmonica from him to us. Oh, there has to be some kind of mojo going on deep inside of Kid Andersen's Greaseland studios. Lots of good stuff sliding out of those doors. I still have a couple of excellent releases by the Kid that I need to share--soon. 'Nuff for now, though.
Posted by Ricky Bush at 1:02 PM