Bet On The Blues 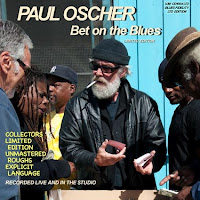 Of course, most blues harp fans know that Paul Oscher's blues validation ticket was punched once Muddy Waters tapped him to fill the harmonica chair in his band. He certainly had big shoes to fill, following in the footsteps of Little Walter, Junior Wells, James Cotton, and Big Walter Horton. Muddy hired him on the spot, after showing up at a gig at the Apollo without a harp player and allowed Osher to sit in for a few songs. Oscher played with him from that 1967 gig through 1972. A big deal was made of the fact that Oscher was the first white musician to be in his band. I don't think that Muddy thought in terms of black and white, but just that this white boy could blow his brand of blues.
Oscher hung his hat out as Brooklyn Slim back in the seventies and today carries on the blues tradition mainly as a solo act with a racked harmonica and guitar; sometimes with keyboards and melodica thrown into the mix.. He manages to get something out of his harp that eludes most racked harmonica players-that nasty ol' amplified tone. I've heard that he refuses to divulge the secrets of the contraption that he uses in order to maintain that essential element to the good ol' ChiTown sound.

He'll probably refuse to divulge his Three Card Monty techniques also, but he does share a tale about Luther Boy "Snake" Johnson introducing him to Little Walter for the first time and the warning to Walter to not play cards with this boy. That humorous narrative opens the title track from Oscher's newest release, Bet On The Blues. It also carries an "explicit language" warning for Osher's colorful choice of words decribing a classic moment in time. And that's all it is, a narrative and not a song cut. It is also one of only two original tracks on the album, but he wonderfully covers a variety of artists and a variety of styles, the majority of them being deep blues. The biggest surprise is his cover of Thelonius Monks' "Round Midnight" with Kid Andersen on standup bass and Willie "Big Eyes" Smith brushing the drum skins. The song exposes his lack of vocal range for this jazzy composition, but he makes up for it with the deep welled vibe set up by his big butt bass harmonica.
The "Kid" and "Big Eyes" hang with on few of the cuts, such as the biographical (IMHO) "Robin Lee". His dirty, nasty distorted guitar sets the stage for a low down woeful blues tale of the pains of love. His vocals match up better with this gutbucket style of blues and the listener can feel the pangs of depression in his voice. The same musical cohorts, along with Bob Welsh on piano, take Freddy King for a short ride (1:57). He slips the slide on and wails on "Slideaway (After Hide Away) and it rips. The highlight for me is Welsh getting down on the ivories.
Osher obviously is satisfying the blues harp aficionados in the audience with his "live" solo rendition of Little Walter's "Juke".  Of course, he's got that sorta stuff down pat and it is apparent that he got some glee from breaking the Master's piece out on stage. This is one of several live cuts mixed in with the studio stuff just mentioned.
He continues in the Little Walter vein to things with "Mean Old World". It's actually a T-Bone Walker song, but when Little Walter transformed into Chicago blues mode, he changed enough that it is credited to him. Johnny "Ace" Acerno and Per Hansen support him on bass and drums, respectively. Oscher pulls out all the stops by sucking the harp tones out of his harp for all it's worth. He throws down some Muddy type slide licks into the mix.

"Jesus, Won't You Come by Here",  "River Jordan", and Mississippi John Hurt's "Lisa Jane-God's Unchanging Hand" spins some spiritual music into the programs mix and adds a bit of contrast to the "Devil's Music", which he keeps crankin' out by cover his ex-boss's "Rock Me" and "Sad Sad Day". He pulls up a darned good approximation of the unique guitar tones that Muddy Waters innovated. He's also pretty darned impressive with a chromatic harp in this neckrack; illustrated by his take on George "Harmonica" Smith's "Bues in the Dark".
So, Bet On The Blues represents a fine additon to the catalog of a veteran bluesman, who cut his teeth with the best that ever played it. For some fine reading and listening, go over to http://www.pauloscher.com/ He's got some great photos of his travels of the blues over there.
Bet On The Blues
Paul Osher
VJM CD1004
Posted by Ricky Bush at 11:12 AM