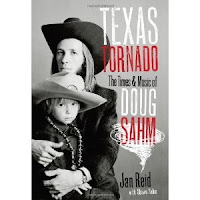 My heading was Doug Sahm's original title for one of his biggest hit tunes, "She's About A Mover", according to Jan Reid's biography of the musical chameleon, entitled Texas Tornado: The Times and Music of Doug Sahm. Seems that the "Crazy Cajun" of record producers and all-around rascal, Huey Meaux felt that disc jockeys would nix playing it on the air back in the '60s for being too provocative, so he had them change the wording a bit. Story goes that Sahm turned to his partner in chimes, Augie Meyers, on the bandstand one night to comment on an attractive young lady moving and grooving on the dance floor and the resulting song put he and the Sir Douglas Quintet on the fast track to stardom.

I know, what am I doing writing up Doug Sahm on a blog about the blues? Hmmm...because I want to. Could be. Or because he's a fellow Texan. Maybe. Might just be that the man could play the hell out of blues like nobody's business when the mood struck, which was more often that lots of folks realize. Might be that I saw Doug Sahm play numerous times back in the day (name of the blog by the way) and he always threw down amazing performances. His music was Texas music, and he captured it in a bottle and made a potent brew from his mixture of country, blues, rock, and conjunto. Couldn't pigeon hole this fire brand of a musical genius. As he said himself, "I don't stay in one bag". Jan Reid does a great job of putting this cool cat in a bag long enough for us to get a better idea of what made the man tick. Along for the ride is son Shawn Sahm, who knew his old man better than anybody. I saw Shawn play with him at a packed Satellite Lounge in Houston one night and Doug allowed his offspring to shred the guitar a time or two. That's Shawn pictured with him on the book cover, taken from a vintage cover of Rolling Stone magazine.

For those wanting a taste of Doug's bluesiest, my favorites are Hell of A Spell, Juke Box Music, and the live Last Great Texas Blues Band. Track 'em down. Of course, he probably gained his most fame in his Tex-Mex band (he invented that style IMHO), The Texas Tornadoes with Freddy Fender, Flaco Jimenez, and Augie Meyers. Reid's bio covers this transition and all those preceding, all the way back to his child prodigy days as a whiz bang triple neck steel guitarist in San Antonio country bands, through his move out to California, and back again to rule as Austin's Mayor of Music. He was the predecessor of the "Cosmic Cowboy". According to Reid, though, he was quite the wandering spirit and didn't stay still very long; even if it was to travel from Texas to California just to get a haircut. His moves were as unpredictable as his music it seems.

I knew that Doug Sahm was quite the baseball fan. He'd mention how the Astros were doing or had been doing at his gigs, but I didn't know that he turned down an offered role in the movie American Graffiti because the shooting schedule would coincide with baseball's spring training, which found him parked in Florida for that annual ritual. Plenty of tales like that one pepper the bio, which takes us on all the ups and downs throughout Sahm's life. One thing is apparent, musically he never stayed down very long. He'd just re-invent himself. Reid takes us along for a ride of these twists and turns that Sahm made, sometimes at breakneck speed, and it's an enjoyable journey for the reader.

He definitely could play anything that had strings on it, along with piano, and horns. I'd imagine that he could break out and wail the blues on a harmonica if he had a mind to do so. Readers here, who are not familiar with Sahm's music, should certainly check him out. Beware, though, one album does not define who this man was because the music didn't define the man, he defined the music and mashed it up to suit him, and a legion of fans along the way.

This book's been out for over a year and I knew not that it was, but I happened to be fiddling around on Amazon one day and they told me that I since liked this, then I'd like that. They were right, so being the impatient type, I downloaded it to my newfangled Kindle and now I'm sharing my thoughts here. I've read quite of bit of Jan Reid's writings over the years from Texas Monthly magazine and his take on The Rise of Redneck Rock last year (which had been out for awhile, too). He knows how to cover the scene. Great read for music lovers.

Texas Tornado: The Times and Music of Doug Sahm
By Jan Reid with Shawn Sahm
University of Texas Press
Posted by Ricky Bush at 4:47 PM