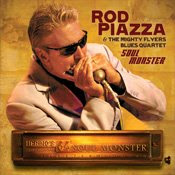 I didn't mention in the post below that I had plans to turn my pickup truck over to my son John, who gets his license on July 2, so I bought a new Ford F-150 crew cab for the trip to the canyons. Shame on me for buying a gas guzzler. Actually, I thought the 21 mpg that I got on the trip was darned good and the back seat area is way spacious for a road trip. Plus, the iPod connection allowed me to plug in as much Little Walter as my wife and son could possibly stand. I do have need for a truck bed for hauling something fairly often around my 5 acres. Enough excuses. I've driven pickups since college and I like 'em and this 'un is a good 'un if the 3,000 mile journey to the canyons indicates anything.

Oh and why is Rod Piazza pictured above? Well, since I need to count up just what this vacation trip might have tallied, I should hold off adding to my substantial stash of blues music. Shouldn't I? So, I thought that I would mention a few new releases that I ain't buying (yet), that may hold some promise for blues harp fans; and the new Piazza Soul Monster from Delta Groove Productions tops the list. He's one of the main men out there doing it today, so we've got to get his stuff. Right? Right. 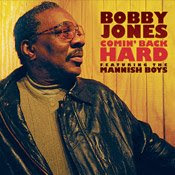 Bobby Jones impressed me with his vocals on the last Mannish Boys CD (also on Delta Groove). Apparently, he happened by the studio, by invitation, and they talked him into singing a few and then a few more and a couple after that and before long he had his own release--backed by those Mannish Boys, who play the blues righteously. The man can sing. He goes from sounding like BB, to Muddy, to the Wolf, to himself, depending on the song selection.

I ran across a CD entitled Day To Day by Alabama Mike and featuring Steve Freund and RJ Mischo. Never heard of Alabama Mike, but those other two guys convince me to get this one. Can't go wrong when Mischo's on board.

Speaking of those unknowns to me. I purchased Severn Records Diamonds In The Rough a few years back featuring some Chi-Town harp players still doing the do around town. I knew not of anyone blowing the blues on that disc and some, like Russ Green, proved to be hugely talented. Others proved why they'll remain second or third tier level players. Enjoyable release, though. Severn repeats the process with a new release called Chicago Blues Harmonica Project--More Rare Gems. Russ Green is back and I know of Little Arthur Duncan (who sadly has passed away), but the rest of the blowers are new to me. Might be a good one.

Along the same lines comes Juicy Harmonica featuring blasts from the past by some folks I've certainly never heard blowing the blues. Ever hear of Leslie Lewis? How about Model T Slim? Or Little Daddy Walton? No? Okay, what about Tim Whisett or Harmonica Slim? No? Me neither. Never heard of the Sundown label, neither. Which makes it all the more intriguing.

How about Big Walter Horton? Okay, now we're talking. JSP plans to release a retrospective of sorts that might be of value to any of us that would like to have his scattered discography in one place. Just might turn out to be a MUST HAVE on the wish list. Anyway--'nuff for now.
Posted by Ricky Bush at 4:47 PM