Leader of the (Wolf) Pack 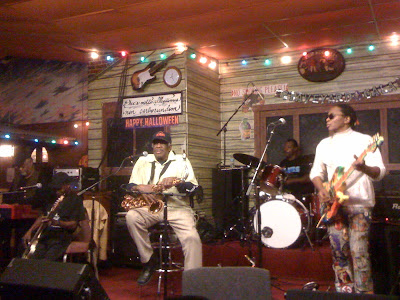 My daughter, Megan and husband Brad, made a jaunt to the Windy City last weekend. Before they left, I told them that Eddie Shaw was playing at Kingtons Mines, and that he would be absolutely worth catching in action and they did. They met up with their friends and enjoyed a performance by this legendary bluesman. He even sent a thank you back to me for sending her to him. 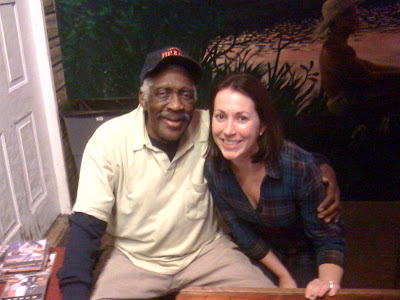 Here's an entry from All Music Guide explaining the importance of Eddie Shaw better than I ever could:

Biography by Bill Dahl
When it comes to blues, Chicago's strictly a guitar and harmonica town. Saxophonists who make a living leading a blues band in the Windy City are scarce as hen's teeth. But Eddie Shaw has done precisely that ever since his longtime boss, Howlin' Wolf, died in 1976.

The powerfully constructed tenor saxist has rubbed elbows with an amazing array of luminaries over his 50-plus years in the business. By the time he was age 14, Shaw was jamming with Ike Turner's combo around Greenville, MS. At a gig in Itta Bena where Shaw sat in, Muddy Waters extended the young saxman an invitation he couldn't refuse: a steady job with Waters's unparalleled band in Chicago. After a few years, Shaw switched his onstage allegiance to Waters's chief rival, the ferocious Howlin' Wolf, staying with him until the very end and eventually graduating to a featured role as Wolf's bandleader.

Eddie Shaw also shared a West side bandstand or two along the way with Freddy King, Otis Rush, and Magic Sam. The saxist did a 1966 session with Sam that produced his first single, the down-in-the-alley instrumental "Blues for the West Side" (available on Delmark's Sweet Home Chicago anthology). Shaw also blew his heart out on Sam's 1968 Delmark encore LP, Black Magic.

Shaw's own recording career finally took off during the late '70s, with a standout appearance on Alligator's Living Chicago Blues anthologies in 1978, his own LPs for Simmons and Rooster Blues, and fine recent discs for Rooster Blues (In the Land of the Crossroads) and Austrian Wolf (Home Alone). Eddie Shaw, who once operated the hallowed 1815 Club on West Roosevelt Road (one of Wolf's favorite haunts), has sired a couple of high-profile sons: diminutive Eddie Jr., known as Vaan, plays lead guitar with Eddie's Wolf Gang and has cut a pair of his own albums for Wolf, while husky Stan Shaw is a prolific character actor in Hollywood.
Posted by Ricky Bush at 6:36 PM

Eddie Shaw is great! A true American musical legend. He, Hubert Sumlin and Nick Charles are probably the only remaining members of Wolf's band that are still alive. When I lived in Chicago, I used to see him perform frequently. Vaan is a fantastic guitar player.

The Mines has a 4am liquor license, 5am on Saturdays. Like a lot of Blues lovers, I spent many days watching the sunrise in the East after closing the Mines.

I was absolutely blown away by the show. I'm generally not a fan of the saxophone, but Eddie Shaw's playing is now a big exception. Great time, thanks for including it.

Yeah, Joe, and Brad tells me that since it was a switch back to standard time that the club was actually open until 6 a.m. that morning. Sounds like things could possibly get a bit wild after the other bars close down.

I've seen some crazy stuff there, but never anything remotely dangerous. The North side clubs are not scary at all, but it is a big city. You should always be aware of your surroundings.