Where The Buffalo Roamed 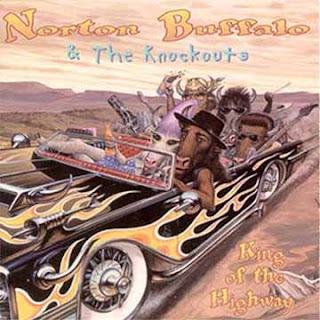 Sitting here listening to Sirius Radio crank out Norton Buffalo's music in memory of one of the truly great harmonica players reminded me that I needed to post my own tribute to the man. He passed away a couple of months after being diagnosed with lung cancer. Back when I began this blog, I mentioned him as a big part of my history with the instrument, so I repeat a piece of that here.

When I first picked up the harmonica with intentions of seriously learning how to play it, I couldn't play anything but chords and couldn't for the life of me coax single hole notes out of the thing. The two embouchure methods, mentioned in the little Hohner pamphlet, to achieve this goal were to pucker the mouth or block the unwanted holes with the tongue. I couldn't do it without slurring the adjacent holes. THEN--one day I accidentally curled my tongue around a note and, WHAM, the single note sounded out. So, I just began working my way around the harp with my curled tongue and it worked. As I ran across other harmonica players, I began to think that I was pretty much a weird duck, because they would just look at me strangely and asked, "You do what?" Now, this was way before I had access to any type of internet harmonica discussion sites, such as the Harp-l.

One of the few mail order harmonica businesses back then was Kevin's Harps. Seeing that Norton Buffalo had two instructional videos available, I ordered both. I had seen Norton play with the Steve Miller band back in the day and I knew that he had played the scorching harmonica on Bonnie Raitt's Runaway . His solos on that one song rank up there with Magic Dick's Whammer Jammer or James Cotton's The Creeper in the minds of harmonica aficionados as a creative gem. He swapped out four differently keyed harmonicas to achieve what he wanted. Those that saw him play it live will testify that it was a sight to behold.

To cut to the chase--in the opening segment of video one the Buffalo said that he got his single notes by curling his tongue. What! I felt vindicated. Here was a pro saying that he just learned to do it that way and kept with it. I had a new friend. Now, since then, someone on the Harp-l discussion site (might have come from elsewhere, I dunno) named the style as a U-Block, which sounds better. Also, since then, I've accumulated quite a bit of Norton's stuff and he's his own man in terms of technique and style. He's way more than just a blues player. Go to his www.norton-buffalo.com while it's still available and click on the photo button to see the myriad of musicians that this man has played on stage with.

When my wife walked in a few minutes ago, she recognized his warm vocals sounding throughout the house, because of all the tons of music I have, she liked Norton Buffalo better than anything I have--especially his work with slide monster, Roy Rogers. She couldn't believe that he had passed. I can't either. He was my same 58. Ride On Buffalo!
P.S.--Here's a nice vid of Norton Buffalo with Steve Miller. It also features some nice stuff from James Cotton:
Posted by Ricky Bush at 4:10 PM

I think every person that became a harmonica player in the past 30+ years has to be a big fan of Norton Buffalo... I know I am and always will be.

I would sure love to get a copy of the "Austin City Limits" show that featured Norton soon after I first started learning to play... must be around 1978 or 1979. I've been a much better person ever since.

Thank you God for giving us Norton Buffalo!

I'm with you AirMojo. I've seen lots of comments around the 'net as to just how special Norton Buffalo was with a lot of people. Thanks for the comment.