Tear It Up, Eddie! 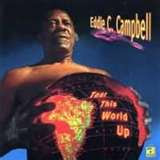 No one does it like Eddie C. Campbell. He's just a unique voice in the world of blues--whether it's from his reverb ladened licks shooting from his trademark red Jazzmaster guitar or his mellow vocals bending notes around his witty, life observing lyrical ideas. Now, if you go back through my posts, you know that I've told a tale or two about getting the chance to share a stage with Eddie and what a thrill it was to play with a "Real" Chicago band, and you know that I've reviewed his stuff before, so you know that I'm partial to Eddie C. Campbell. There just ain't mistaking his style for anyone else's, even though he's steeped in the tradition of the Chicago Westside guitar sounds of his childhood friend, Magic Sam, or Otis Rush, and Buddy Guy (even though Buddy has walked on a wilder side for quite some time).

His Delmark Records' release, Tear This World Up, has the same atmospheric tonal vibe that Hopes and Dreams (Rooster Records), and That's When I Know (Blind Pig Records). And again, that vibe just has a uniqueness to it that doesn't exist anywhere else in the blues. Even though Eddie sings that he's played with everyone from A to Z, he makes the point that everyone also played with him on the fourteenth cut called Bluesman. He reels off a litany of blues legends such as Jimmy Reed, Howlin' Wolf, Muddy Waters, Otis Rush, Willie Dixon, Luther Allison, and even James Brown. There's no bragging on the tune, just the fact that they played with each other. He doesn't say it, but he is the legend now. He also sounds like none of those that he played with or who played with him.

The CD opens up with a typical Campbell lyrical double entendre twist called Makin' Popcorn--which he states has to be done real slow. The tune boogies like Canned Heat's On The Road Again thanks in part to Mojo Mark Cihlar's blues harp lines, but mostly to the drive of drummer, Marty Binder, and the insistent thump of Dario Golliday's bass guitar. These two guys do some aggressive, rhythmic pumping throughout the proceedings. Eddie lets us know it's Eddie from the first jangly chords he strums leading into his staccato, reverbed single notes with a low note unexpectedly shooting from his fingers over our heads on occasion.

His humorous side comes into play on the self effacing, Big World. He works in an audible snore to let us know that he's fallen asleep once the women he's wooed is ready and before he has a chance..."to tear this world up". Pretty typical Eddie C. tale relating to the real world, but devoid of the same old blues that permeates too many tunes today.

Eddie C. pays tribute to his old friend, Magic Sam, with Easy Baby (which Delmark recorded by the way). Of course, Campbell's guitar notes bouncing and echoing in the air capture's Sam's tone perfectly, but he takes the low road with mellower vocals than the higher pitched vibrato plea that Sam made his trademark. Binder and Golliday bang the hell out of the bottom as Eddie does his buddy proud. Hard to believe that Sam Maghett's been gone for over forty years.

Although Eddie works his falsetto vocals lines into several songs, he really shoots it up there on Tie Your Time Up, a song lamenting those that just flat waste our time. Use of this vocal pattern goes all the way back to Charley Patton, Robert Johnson, Tommy Johnson, and numerous others, but it has become a trademark of Eddie C. Campbell's and not many do it better for lyrical emphasis.

Voodoo really gets atmospheric. The echo laden tone italicizes Eddie's message regarding the fact that..."my flowers won't grow, the mule won't pull the plow...all I'm getting is sour milk from the cow". Among other weirdness that just has to be full of voodoo. Cihlar's swoops his harp in and out to add to the airy, slap backed tonal groove.

Being the harp player that I am, I was hoping that Cihlar would be turned loose more often, but he's stays put in the pocket for the most part. Vibrations In The Air, which comes closest to a down and dirty Chicago shuffle, features his playing more than the other three tunes with his credits. The tune opens with him in the driver's seat and allows him to work in a bit of a solo as Eddie sings about changes taking place around us. Cihlar gets another solo shot on Buddy Johnson's I'm Just Your Fool. He steers clear of replicating what Little Walter put into his seminal version of the song and does his own thing. He does a good job of weaving around and augmenting the horn section.

A couple of instrumentals showcase the Eddie C. Campbell book of knowledge as he twists, turns, and gets what he wants to from the Jazzmaster. It's So Easy has a finger snapping rhythm in the style that is so much of what he does and All Nite just has some slice and dice, slashing notes shooting all over the place. The rhythm section nails it down tight and a good bouncing, boogie piano from Marty Sammon really ups the ante.

I've never heard Gerwin's Summertime kick off with a Flamenco picking style, but he eases it into a blues stew that is all Eddie C. Campbell and it sort of illustrates how he can take the very familiar and make if fit his unique self. Okay, that's it. Check his stuff out for something different in the blues.
Posted by Ricky Bush at 1:14 PM

Eddie C Campbell is excellent! If you get the chance, check out his release on Rooster entitled, "King Of The Jungle!" It's an excellent CD. It's also the recording debut of Lurrie Bell.

Hi Ricky
THis is a fantastic review of one of my favorite all time Chicago bluesman, Eddie C!

THanks so much for taking time to write such a wonderful, heartfelt, spot on review of this one of a kind blues legend. Dick Shurman did a great job producing!

Hey Joe--yeah, I have most everything that Eddie C has done. I have "King Of The Jungle" on LP vinyl--Carey Bell blows some great harp on it, also.

Kevin--Thanks for dropping by and leaving such a nice comment. Eddie C's definitely one of my favorites. Tell him hello for me from down here in Texas and make sure that he sees the review.