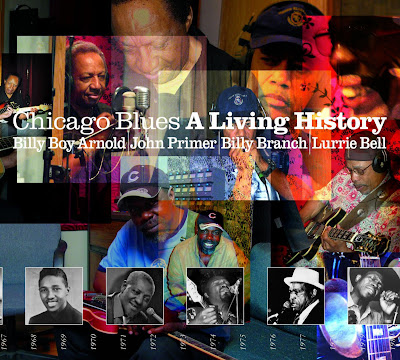 My friend Joe, from Joe's Blues Blog, left me a comment in regards to me getting my hands on a "must have" blues release featuring some of the finest bluesmen that are still out there doing it and I told him that I planned on doing just that. Since then, August Forte of NoVo Arts, Inc sent me links to live performances from the tour touting the album and a press release that'll tell you more than I know about their grammy nod AND since some of you just might need a little mo' blues for Christmas or know someone who does, then this ought to convince you as to what to choose.

CHICAGO BLUES: A LIVING HISTORY PAYS TRIBUTE TO THE EVOLUTION OF THE GENRE FROM ITS EARLIEST DAYS THROUGH THE PRESENT

Chicago, IL – December 9, 2009. Raisin’ Music is proud to announce that Chicago Blues: A Living History has been nominated as “Best Traditional Blues Album (Vocal or Instrumental)” for eligible recordings released October 1, 2008 through August 31, 2009.

In an unprecedented collaboration, the legendary Billy Boy Arnold, John Primer, Billy Branch and Lurrie Bell--inheritors of the Chicago Blues tradition—joined forces early in the year to celebrate and pay tribute to the evolution of Chicago Blues. In April of 2009, this super-group released Chicago Blues: A Living History (on the indie label Raisin’ Music) to overwhelmingly positive reviews. During the following summer, the group toured Europe, playing to packed crowds at fifteen major music festivals in seven countries.

The 2-disc, 21-track double CD pays tribute to the genre's creators, its rich history and current practitioners and is accompanied by a 36-page booklet with extensive liner notes, photos by Marc PoKempner and a handsome 8-panel Digipak designed by Larry Kazal.

"...21 tracks of gorgeous blues; will undoubtedly challenge for blues recording honors this year. [Chicago Blues: A Living History] is a tremendous project that ought to be a finalist in a few awards categories. [It] is just a joy to listen to (and to look at), and it is without a doubt a recording that you will return to -- even if you have all the originals... Sonically superb and carefully conceived". -Living Blues Magazine

I can't see any blues lover not jumping on this one--these guys are just way TOO GOOD to ignore.
Posted by Ricky Bush at 3:26 PM

Thank you for stopping by my blog, Ricky. I hope you do make it to the Highlands some day. I'm an American ex-pat, so if i can do it...you can, too. ;) Just believe! I love your blog. I've a dear friend who played with Elvin Bishop for a while. Through him i discovered The Paul Butterfield Band and especially Mike Bloomfield...and of course, Buddy Guy...well, so many others. My friend reintroduced me to the blues...the right way, soul to soul. It's been a crash course, with a whole lot of catching up but i've enjoyed every blissful moment of it. There's a special place in my heart for Chicago Blues... after a wee detour to Austin and Stevie Ray Vaughan, that is. ;) Lizzy

Thanks back for stopping by my blog, Lizzy. Great to here from a nother blues fan out there.

I am very pleased with the nomination for Grammy awards. Larry deserves it and all the musicians embarked on this magnificent adventure. Congratulations also to Aulnay-sous-Bois for her courage and risk taking.
I am greeted warmly and especially Billy Flinn, Kenny "Beedy-Eyes" Smith (Mister Mac Do!), Felton Crews, Matthew Skoller and Lurie Bell that I had left behind.

This band is amazing. The double CD is fabulous. I look forward to seeing you live at your next tour in France!

Just checking to see if this blog is still active. If so, my name is Khalfani Makalani and I am the creator of the Chicago Blues Beautillion, a mentoring and development project for up and coming Chicago blues artists. I'm looking for talented young Chicago area blues artists and industry veterans to participate in this years' activities. Know of anyone?

Thanks for dropping by Khalfani. Yeah, I try to keep the blog active and interesting. Since I don't hang around the Chicago scene, I really don't know who to suggest to you. Sounds like a great project.