Holiday Cheers To Ya 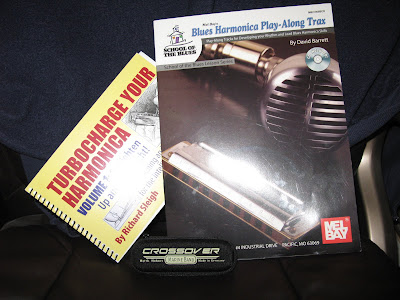 Just thought I'd share what Santa brought. Didn't really have a burning desire for much, but I put in my request for a few things that I figured that I'd put to good use. These have been stuffed under the tree for a few weeks. I always place my own orders with Santa online and then my wife wraps them up with ribbons and bows, and I wait until Christmas morning like a good little boy to open them.

1. Richard Sleigh's Turbocharge Your Harmonica, Volume 1: Straighten Up and Tune Right! Basic Tuning and Tweaking for the Intelligently Lazy Musician. The last part of that title enticed me into getting this instructional manual. I've worked on my harps a bit, but my lack of patience plays a big part in why I've got a few harps in various stages of being tweaked lying around the house. Sleigh is one of those master harp techs from the Joe Filisko guild of customizing harmonicas, so its nice to see him share some of his knowledge and philosophies. This is not a booklet to turn anyone into a master customizing, but simply a set of guidelines to tune and adjust your harmonica--faster. As he says, the book is for people who want to learn from his mistakes without making them, and he says up front that he intends to entice the reader into buying his tools to get the job done more efficiently. I knew this before buying the book, because I had read reports about his tool kit (especially his draw scraper). I've only browsed through the book and there is plenty that I already know, but from what I've gleaned already, he's laid things out very simply and straight forward and offers a ton of tips that he uses. There are no deep secrets here and he even points to other resources that offer harp tweak instruction. He goes into very little detail on gapping techniques and such--he just explains how to do it. I do think that it'll get me to digging back through my bone yard of harps for a little practice. I've some tools, but maybe I'll spend a little of my Christmas cash gifts on his.

2. David Barrett's Blues Harmonica Play-Along Trax. Since I tracked down Sleigh's book on Barrett's site, I decided to through in a set of jam tracks. I've gotten to where I mostly play along with blues CDs by various artists, I do have a few discs designed for harp players to jam along to, and I do that sometimes. I figured that I might as well add a fresh set of tunes. If you have Barrett's stuff, then you know what to expect--a variety of blues styles, played by his School of The Blues Band, with detailed explanations and examples of how to play the pieces. Jam on!

3. Hohner Marine Band Crossover in G. The Marine Band harmonica has always been my favorite axe and when they offered the Marine Band Deluxe, then I was in hog heaven. They were more money than I wanted to spend for a harmonica, but they were also such an improvement to the standard model. They did things that I had done with my harps before, such as sealing the comb and replacing the plate nails with screws and such--so basically I was paying them for doing it for me. What I have found is that they have outlasted my standard Marine Bands significantly enough to make purchasing them worthwhile. Then, enter the Crossover. The replaced the pearwood combs with bamboo and completely sealed them from moisture (the Deluxe were partially sealed) and tweaked them a bit more than before. The only keys that I could find available were in F or G. I don't play either of those keys a lot, but I've had my G around for a long time and it needed some of that tweaking that Sleigh describes in his book--may be my first candidate. The F needs work also, but the Crossovers costs a bit more than the Deluxe models, so I went with the G. Played it long enough to go--Wow! Tight, smooth, responsive, and loud! Great harp! I don't have the knack for doing the technical reviews that some folks have, I just know that it works for me.

4. Chicago Blues: A Living History. The post below gives description of this release. Do I have it? No. I was getting quite spoiled with the prompt delivery of the three items above (within a few days), that I through in this disc onto my Christmas list a bit later. Even though Amazon stated that it would be in by December 21st, it hasn't made it as I type this. I guess the great Blizzards of '09 slowed its path. Oh, well, I still have something coming for Christmas.
(Pardon the flash glare on the photo--battery ran down, and I got too lazy for a do over)