Blues Across The Pond 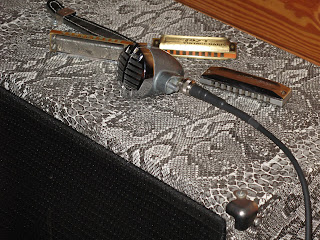 I've got a few examples in my collection of just what some of those foreigners can do with a blues harp in the mouth. Some of these guys prove that they are dead serious at doing the blues right. As a world geography teacher, I always included a unit on blues music as an example of cultural diffusion as the music moved from where it was born into cultures far removed from that experience. Okay, getting too academic here, so here are some folks that deserve a listen and some much more than that. My blues collection is a bit more scattered around the house than it should be and I couldn't physically locate some of these artist's product, but I have 'em somewhere. I have several releases by some of these folks, so I'll just list the artist or band. Some of these were hard to come by, but they actually may be better known now, than then. In other words, I'll let you check and see if they are on iTunes or have a myspace or if they went off and joined a cult.

1. Collard Greens and Gravy/Australia--They are the #1 Veterans of Foreign Blues Wars in my book. I've already professed my love for Ian Collard's harp tones, so just go get everything that they've done.

2. Blues Before Sunrise/Australia--Okay, this is a bit of Ian Collard again. He's playing with a darned fine blues band from Down Under, though.

3. Paul Lamb/UK--The best traditional Chi-town blues harp type of guy over there. He's got it all going on, proving that he is well studied in the American Masters. Anyone who can hold there own with Kim Wilson, is substantial in my book. Not just a fat toned amped dude,either, because he absolutely nails Sonny Terry's style. I couldn't find his CD around here, but I've pulled a lot of his stuff off iTunes. He's got an instructional/confessional DVD out that I've been meaning to get, but at the time it was in the European format. I thinks its available for here, now. Looks like a good one.

4.Christian Dozzler/Austria--I almost didn't include Christian because he's been living in the Dallas area long enough to be called a Texan by now. I'm pretty sure that I had written him personally go get a couple of CDs that he had out at the time. He plays a lot of boogie woogie piano and keyboards, but when he whips the harp out, he has some serious tone. I met him at the Granada Theatre in Dallas at a Little Charlie and the Nightcats show. He was playing keys with Wanda King, Freddy's daughter, who opened. Nice guy.

5. Blues Fools/Hungary--I interviewed Matyas Pribojszki back in the day when I frequently contributed articles to the American Harmonica Newmagazine. It was by e-mail and if I could find the article, I would quote from it. He was quite a player back then and I'm sure that he is still proving that he's one of the best in Eastern Europe. They sent me a couple of different releases of predominantly originals in a West Coast swinging style--which was hotter back then than now.

6.Nine Below Zero/UK--The blues met a punk attitude with this crew of Brits back in the early '80s when harp whiz Mark Feltham was blowing and singing with the group. What I have is a double disc, Live At The Marquee and Don't Point Your Finger. Now, I'm not a fan of blues bands filtering the guitar through a Marshall stack, but these guys just had an unbelievable amount of energy and it's fun listening to the harp applied to guitar centric tunes by Freddy King and Otis Rush along with the Little Walter and Muddy Waters cover. When's the last time you heard anyone cover "Wooly Bully", huh?

7. BB & the Blues Shacks/Germany--I think the CD I have is Midnight Diner, but it's where I haven't looked I guess. The brothers Arlt run this gig. Michael(harp)and Andreas(guitar) are well respected on the European blues circuit and they are the go-to guys for a lot of traveling bluesmen from the U.S. who need expert support. RJ Mischo and Tad Robinson have recorded with them. I'm still looking for the one with Robinson. They play a variety of blues styles and may even kick in some rockabilly.

9. Helge Tallqvist/Finland--This cat includes a great booklet detailing his trip to the U.S. to meet his hero, George "Harmonica" Smith. He includes personal photos of he and George and family and then blows through twelve covers of tunes made famous by the man. There's also an interview snippet. Lots of chromatic work. The title is Helge Tallqvist & Groovy Eyes Plays George "Harmonica" Smith.

10. Little George Sueref/UK--What really impresses my more than Little George's harp playing is his singing. He has a JB Lenoir vocal nuance that is quite unique and he can call up Junior Parker's pitch as well on a set of originals that sound like they came out of the Chess vault. No kidding. This one was Little George Sueref and the Blue Stars. Lazy Lester even makes a cameo.

11. Bharath Rajakumar/UK--How's that for a blues name? Bharath and his Rhythm Four hit Little Walter tunes just about note for note on Friday Night Fatty. That is also what critics take to task, also--too much note for note. He does stray a bit from Little Walter on the CD, but then it's Sonny Boy II note for note. I think there was a time that doing the carbon copy was cool, but I think the argument is that we've been there and gone. Guys like Rick Estrin, Kim Wilson, and Rod Piazza were doing that back in the late '60s/early '70s and pushed it into their own styles. I remember the first Mitch Kashmar release that I got was him doing Little Walter and I liked it, but it lacked excitement--why not just listen to Little Walter? Kashmar has moved way beyond that now and I think that since Bharath has that one out of his system that he'll smoke 'em on down next time.

12. Steve Baker/Germany--I can't remember where I put his stuff either, but EVERYBODY knows he can play, right? right?

13. West Weston/UK--Still looking for something that represents the harp playing that I've heard him do on YouTube--that's sounds exactly the way I like to hear the blues harp played.

Okay, that's it. I know there is tons of more talent over there, those are just some releases that I have lying around--somewhere in some cases. Anyway--
Posted by Ricky Bush at 11:07 AM

Nice list! Thanks for the meditation on the blues from overseas...and by the way, i would love to take a course on blues...oh man!

Thanks for checking it out. There are some serious blues people over yonder. Look out, once the blues gets ya, it never lets go. Anyway--

Bharath looks and moves like such a square- no stage presence, but then he is pretty much just a machine. Does he have any ideas of his own, or can he only copy the work of better musicians of 50 years ago?

Hey Anon--
Never seen him in person, so I can't attest to his stage presence, but he does have solid blues harp skills that I'm sure he could vary if he wanted. To each his own, I guess. I reckon he's no different that the myriad of copy bands within other genres. Anyway--

Richard, Yes, he isn't without talent, but all I've ever heard on Bharath's youtube videos is Little Walter. As a long-time harp listener and off-and-on player, I find Bharath a novelty, and a bit of a thief-and that is annoying. He wears thin quickly on those who know the original work. Improvisation and original thinking are highly demanded by people who love that instrument. Why not listen to the real thing? Few harp players of stature would stoop to shameless note-for-note copies of another's work. The difference between Bharath and musicians like Little Walter, Paul Delay other great players is that they invented, not copied.

I understand and agree with what you're saying. He replicates Little Walter's licks too perfectly with no individual creativity on display. I mentioned in my post that pros such as Kim Wilson, Rick Estrin, and Rod Piazza all use Little Walter as a jumping off point and can nail the heck out of his licks and tone, but they've all developed unique styles or they would all sound the same--and they don't. Anyway--

Hey Ricky,
Yes, I couldn't agree more about the 3 you mentioned. William Clarke also comes to mind-he could play excatly like the Chess/Checker guys if he wanted to, but he was very much his own man. Charlie Musselwhite was clearly inspired by George Smith's 3rd pos playing-but he made it his own style. my 2 cents worth...